How Thirsty is Shale Gas? 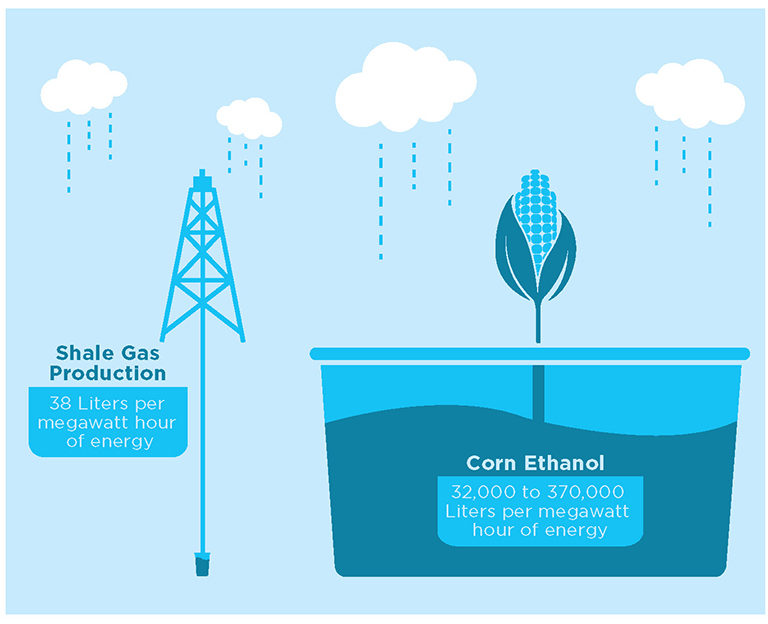 Water use in the production of shale gas and corn ethanol.

The New York Times reported on 15 May 2014 that Butte County in California banned hydraulic fracturing because of concerns regarding freshwater consumption in a drought year. Shale oil and gas opponents have seized this issue even in parts of the country not suffering any significant drought. The perception of being deprived of drinking water has strong imagery. The facts beyond the headlines are decidedly not so dire.

A single shale oil or gas well will use between 3 and 5 million gal of water for drilling and completion operations. This sounds like a lot and, in some sense, it is a lot. But then you realize that the average golf course uses that much every 25 days, about the length of time it takes to drill a single well and start producing from it. It is also the amount of water that New York City uses every 4 minutes! Not a fair comparison, you say. Well, why don’t we compare it against other forms of energy?

Such comparisons are best made on the basis of liters of water per megawatt hour of energy. Shale gas production uses about 38 liters. In comparison, corn ethanol on average uses 32,000 to 370,000 liters (the higher end of the range is for irrigated corn), and the real shocker is soybean diesel, which comes in at 180,000 to 960,000 liters. In other words, corn ethanol uses more than 1,000 times more water per unit of energy compared with shale gas. Other sources suggest an even greater disparity in water usage (Science 2009).

Conventional fracturing fluid uses freshwater as the base fluid. Fresh is defined as 500 parts per million (ppm) or less of dissolved solids. The fluid returning to the surface after use, known as flowback water, is always saltier than what went in. Salinities of 200,000 ppm are not uncommon. As a frame of reference, seawater runs about 35,000 ppm. Recent advances in fracturing fluid chemistry allow for such flowback water to be reused without removing the salt down to fresh standards. Currently in the Marcellus shale play, some companies are reusing almost all of their flowback water with minimal treatment. This practice materially reduces freshwater requirements.

Between 16% and 35% of fracturing water returns to the surface. Consequently, even reuse entails making up that with new freshwater. Since salt concentrations are tolerable, this makeup water could also be salty. To the extent that this is done, the industry would not be competing to use freshwater resources. How viable is this option? It turns out that salty water is commonly available almost anywhere that freshwater is found. The comprehensive map of saline groundwater by the US Geological Survey is old but instructive in this regard (USGS 1965). Fresh groundwater gets saltier as you go deeper. This is because over time, minerals dissolve into the water, more so at greater depths. Very often, the fresh and saltier zones are in direct communication. This is why in times of drought, farmers face restrictions on the rate of withdrawal of freshwater in order not to draw up saltier water from below.

Shale oil or gas production does indeed use a lot of water, but not as much as other sources of energy. Recent advances in technology allow the substitution of brackish water for freshwater. This is already happening today. If the practice becomes more widespread, public acceptance of the industry, especially in drought-prone areas, will improve.

Another Biofuels Drawback: The Demand for Irrigation Science Vol. 326. 23 October 2009.

How Thirsty is Shale Gas?