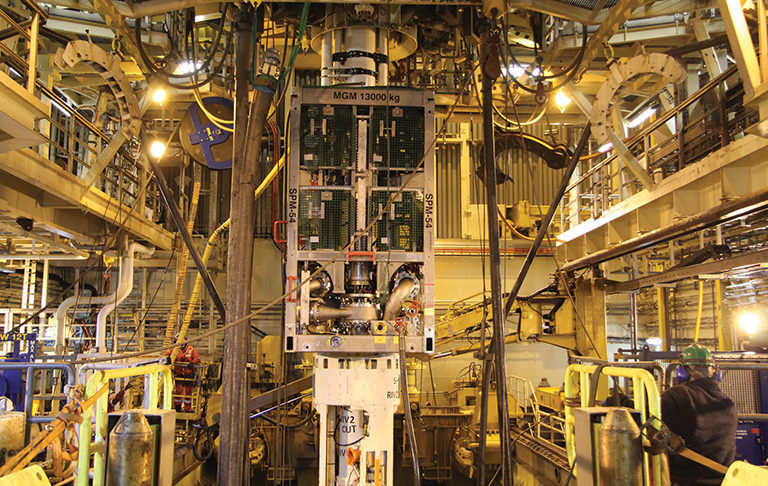 Courtesy of Enhanced Drilling.
The EC-Drill pump is connected to the riser in the moonpool of the COSL Innovator which was used to drill wells using the dual-gradient system in the Troll field off Norway. In the bottom of the metal frame are the pumps and in the lower middle is a motor.

The Troll field is one of the largest gas producers discovered off Norway, but ensuring its long-term future required finding ways to drill wells in an increasingly fragile formation to develop its rich oil reserves. Production dating back to 1995 has sharply lowered formation pressure and caused subsidence, making it difficult to drill the wells Statoil needed.

Even with some of the lightest drilling mud, Statoil was unable to blend a drilling fluid light enough to avoid major losses in some parts of the formation, said Dag Ove Molde, project leader of dual gradient on Troll at Statoil, the operator of the field.

Drilling is expected to get even more difficult as future production further reduces reservoir pressure. A Statoil study predicted it would need to curtail drilling by 2018 because it will become increasingly difficult to drill long horizontal wells needed to efficiently produce oil reserves.

This paper presents the design considerations, methodology, and results of two deepwater MPC operations conducted to cement production casing strings within a target operating window of approximately three-tenths of a pound.

This work focuses on the development of specific methodologies to support managed-pressure-dilling (MPD) operations implemented on real-time diagnostic software.