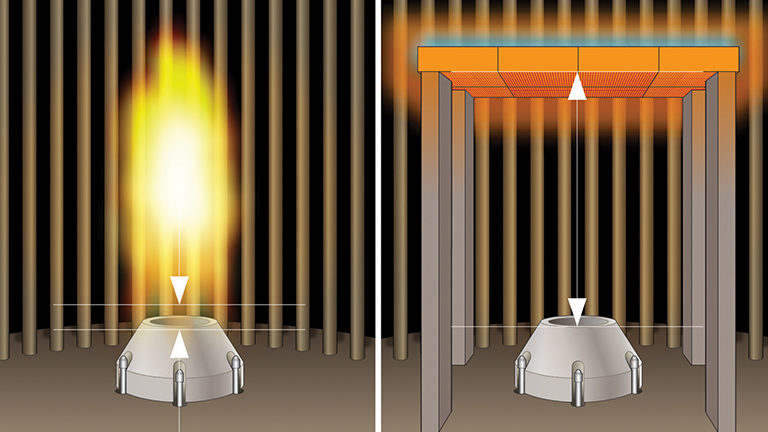 Image courtesy of ClearSign Combustion.
A thick tile with many small holes is used to reduce emissions by ensuring quick, efficient burning of a natural gas/oxygen mixture. The system from ClearSign Combustion is expected to save energy by conducting heat more efficiently than a flame.

A major heavy oil producer in California has agreed to test a device that is designed to reduce emissions of smog-producing gases and increase the efficiency of gas burners.

Aera Energy, a joint venture of Shell and ExxonMobil, said it has agreed to retrofit a steam-generating unit used to heat heavy oil by using a new approach from ClearSign Combustion, a small publicly traded Seattle-based company whose mission is finding new ways to manage flames using a range of industrial processes.

Its first offering will be tested in boilers used by Aera to create steam to reduce the viscosity of extremely thick crude so it can be pumped from the Belridge oil field in Kern County, California.

The company said it wants to see if the technology, which is designed to achieve ultralow emissions (5 ppm) of nitrogen oxide, or NOx, can help it meet a mandate from the San Joaquin Valley Unified Air Pollution Control District to reduce NOx, a component in smog, to 9 ppm or less.

The ClearSign technology is the size of the flame. Its Duplex tile technology is designed to replace methods that create flames stretching out more than 10 ft with thousands of smaller ones no more than 6 in. tall, according to videos on its website.

The new approach performs differently because “we have mixed fuel and air prior to ignition. The oxygen will diffuse more rapidly for shorter flames,” said Rick Rutkowski, chief executive officer of ClearSign.

The key component is the thick tile on top of a gas mixing chamber, which channels a natural gas/oxygen mix through thousands of small passageways. Faster burning at a controlled temperature in the tile’s cells is supposed to mean more efficient ignition with ultralow emissions. It is simpler than current low-emission burners that precisely manage the fuel/air mix within the flame, and often require that exhaust gases be recirculated for a second, pollution-reducing burn.

While ClearSign’s total emissions goal is no more than 5 ppm of smog-producing nitrogen oxide and virtually no carbon monoxide, it should be lower or a fraction of the emissions from current methods, Rutkowski said.

Also, the flames heat the tile that radiates heat more efficiently than a direct flame, making it more energy-efficient as well. The Aera test will be the first to see if it can reproduce the results from its internal testing in a larger boiler used in a commercial operation. Rutkowski said one goal is to “quantify the energy-efficiency gains,” which are thought to mean a 1% or 2% fuel saving.

Aera said the test is expected to begin this fall “and will require several months before NOx and thermal efficiency results are available.”

Target markets in oil and gas exploration include the enormous boilers used by oil sands producers in Canada, heater units on pipelines, and refineries in urban areas where smog caused by NOx is a problem.