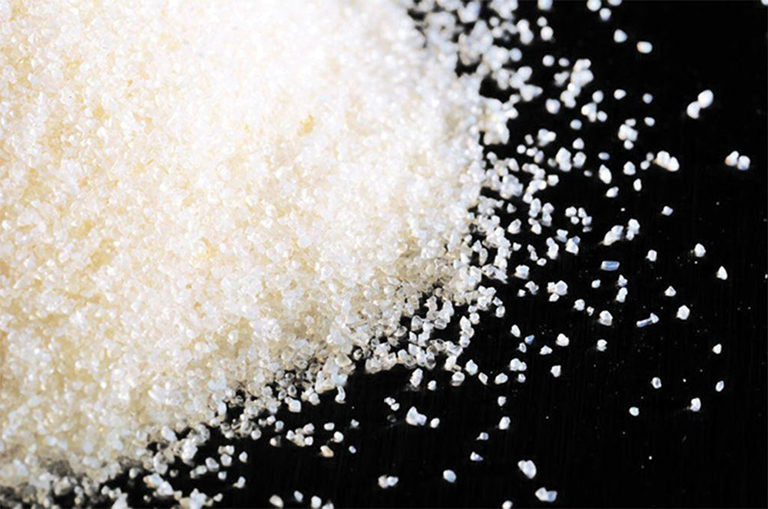 Image courtesy of ProSep.
Discovered by researchers at the College of Wooster in Ohio, Osorb is an organically modified silica glass that can absorb four times its mass in hydrocarbons and then be purged and resused.

A new type of organically modified silica glass that can remove a wide variety of oils and contaminants from produced and flowback water is showing promising results as it undergoes field trials. The material, commercially referred to as Osorb media, is sold by process technology provider ProSep, the only company licensed to supply it to oil and gas companies. The developer said that the media is unique to the world of filtration technologies because it can absorb and adsorb up to four times its dry mass and then be regenerated for reuse once the material has reached its sorption limit. The company has delivered four rental units and is building a larger system that is capable of regenerating the media in place. The first systems require that the media be changed out once it has filled up with hydrocarbons.

The primary application that ProSep is developing the technology for is final stage polishing for water discharge from offshore production platforms and enhanced oil recovery (EOR) reinjection. Production companies have also expressed interest in using the technology as a pretreatment system on the front-end of reverse osmosis membranes to protect them from fouling.

The Osorb material was discovered at the College of Wooster in Ohio when chemistry professor Paul Edmiston and undergraduate student Colleen Burkett were researching novel methods to detect explosive materials for airport security. During a test, the material rapidly swelled up when introduced to nail polish remover containing acetone, a flammable organic compound. What the researchers had discovered was an entirely new type of swellable material that attracts hydrocarbons while allowing water to pass straight through, unabsorbed.

Tatiana Eliseeva, a senior research chemist at ProSep, said the Osorb silica is engineered at the molecular level, thus making it a nanomaterial, which provides a large surface area to facilitate the process of absorbing and adsorbing oils, greases, and other organic chemicals. “It is structured in a way that is very highly hydrophobic and oleophilic,” she said. “And because it is a physical process, it is reversible, which makes our media reusable.”

ProSep has completed offshore field trials in California, the North Sea, and Asia, and onshore in the Middle East. In one of the trials in Asia, the Osorb technology reduced the oil-in-water level from 604 ppm on the inlet side to 7.4 ppm on the outlet side, a removal rate of 98.7%. Another trial in the Middle East reduced the volatile organic chemicals benzene, toluene, ethylbenzene, and xylenes (commonly referred to as BTEX) from a downstream water system from a level of 1,000 ppb to 32 ppb.

The field work done so far was performed using single vessel systems; however, the company is building a larger demonstration unit that will have two media vessels. This system will be fully automated and its dual-vessel design will allow one vessel to filter fluids while the other regenerates the media, thereby making it a self-contained and continuous cycle system. The “next generation” unit is expected to be used onshore early next year and will be just a little smaller than the commercial version that ProSep hopes to develop in the coming years.

One other application area the company is investigating through field trials is gas treatment. The company found that the Osorb media is able to selectively remove certain hydrocarbons from natural gas streams, which reduces the dew point of the natural gas. This allows the technology to capture valuable natural gas liquids (NGLs) while allowing methane gas to remain in the flow stream. “If natural gas is running through it, the methane will pass through and you essentially get a more pure natural gas stream as we remove some of the heavier (components),” said Michael Grossman, a product development engineer at ProSep.

When the Osorb media becomes filled up with lighter oils and contaminants such as BTEX, it is purged in a one-step process using an inert gas, such as nitrogen, and by applying temperatures not exceeding 300°F to the material. For hydrocarbons with a higher molecular weight, such as heavy oils, grease, or asphaltenes, the system is first flushed with a hydrocarbon-based displacement fluid that the Osorb material is more attracted to.

Once the fluid has saturated the media, the heavier hydrocarbons are released, leaving only the displacement fluid that can then be purged using gas and heat. The company has found several displacement fluids that work with the Osorb material; however, it continues to research other fluids to increase the flexibility and is developing a “green solution” that will not use harsh chemicals.

ProSep said it is also looking for an opportunity to conduct a pilot-scale test to verify lab results that show the Osorb material can treat produced water without capturing or damaging the polymer that is injected into reservoirs for chemical EOR. Instead, the polymeric solution remains in the treated water for operators to reuse. “When they inject EOR solutions, most of the cost is on the polymer because it is really ‘smart’ polymer. A lot of money was involved to create it, and a lot of money was involved to produce it,” said Eliseeva. “The polymer is the most precious thing.”

ProSep said after the oil and surfactants are removed, the treated water will contain the polymer that can then be reinjected, though it noted that some of the polymer will always remain in the reservoir, so companies should not expect a total recovery. The company knows of no other technology that can remove surfactants and oils from a feed stream without destroying the polymers used for this type of chemical EOR.