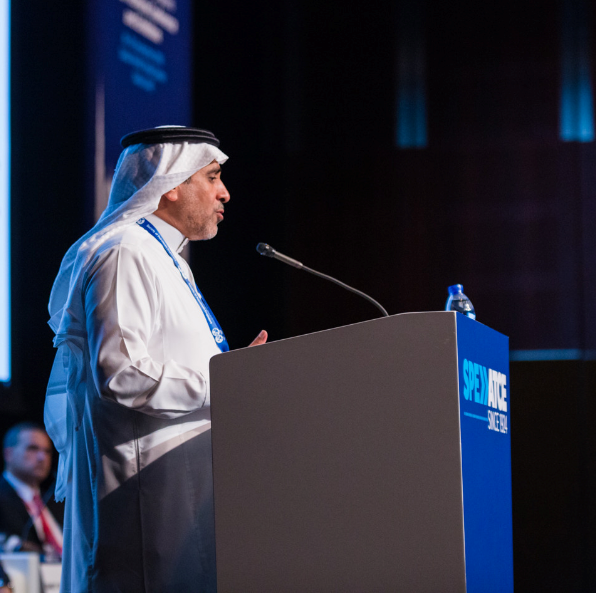 Saudi Aramco has begun moving toward the production phase of its ambitious plan to develop its enormous hoard of unconventional gas resources.

That is one of three early areas within Saudi Arabia where it is focusing on developing gas from reservoirs where fracturing is required to produce from various degrees of tight rock.

Commercial scale production of gas from the areas could come as early as 2021, he said when asked during the session. Afterward, he qualified that while it is a reasonable estimate, it is too soon to be making commitments.

Saudi Arabia’s appetite is based on a simple desire to burn gas rather than oil to meet the growing demand for electricity, which also allows for the export of the crude.

But the organization is required to meet a complex set of goals, from using what has been learned elsewhere to maximize amount produced from the start, to promoting jobs and growth.

The unconventional potential is enormous, with a resource 10 times the volume of the conventional oil and gas in the ground there. Complex project development skills are required because resource development needs to be coordinated with pipeline, processing, and industrial projects to use the gas to stimulate economic growth and jobs.

The targeted rock offers a range of challenges from tight gas to much tighter unconventional formations in the initial target zones, including:

Saudi Aramco has spent years painstakingly analyzing, testing, and modeling its unconventional reservoirs with a goal of avoiding the waste and failures associated with US shale development.

“We do not want to mobilize a whole fleet without consistently getting a good well,” said Zillur Rahim, a supervisor in a study unit in Saudi Aramco’s gas reservoir management department. His paper presentation (SPE 181280) at ATCE discussed how the company is using modeling to predict how different well orientations can affect fracturing. A second paper (SPE 181617) considered how to predict the effect of rock properties on fracturing results.

“We do not waste our perforations in an interval that cannot be fractured, or will not produce,” Rahim said.

While the goal is hardly unique among completion engineers, Saudi Aramco is putting an unusually sophisticated effort behind reducing the risk of wells falling short of expectations. Phrases like learning from failure or trial and error are not used.

“When we go into a factory mode … we should know the sweet spot to maximize recovery. That is where we will see a huge reduction in cost and sustainable production,” Al-Abdulqader said.

The Saudi national oil company has taken advantage of the downturn to hire experts in the field to work in a company within the national oil company. That organization is structured to try to recreate the alchemy of a small independent where small, multidisciplinary teams of employees as well as advisors from service companies work closely together.

Saudi Aramco is pushing the limits of the technology to create more productive wells. A wide range of data from each well flow into a central database.

It is experimenting with novel approaches such as energized fractures, where carbon dioxide (CO2) is added to the fracture water. Rahim said that it can aid in the cleanup after fracturing in places where it can alter performance. Researchers elsewhere are looking at CO2 as a way to stimulate more production.

To conserve fresh water, tests have shown fracturing can be done using treated seawater (as also used for injection), and the company is researching whether benefits can be gained from waterless fracturing methods, Al-Abdulqader said.

Fracturing is being done with the newest-generation ceramic proppant because the wells are in high-stress zones and 300-mesh sand (particle size of approximately 48 microns, similar to silt) to hold open the smallest fractures. This is much finer than the powdery 100-mesh (150-micron particle size) that is commonly used in North America.

As for how much it will cost to produce the gas, Saudi Aramco did not say. But Al-Abdulqader said the new organization’s ability to make quick, well-informed decisions can save money and time, and in the future may also be how conventional fields are managed.