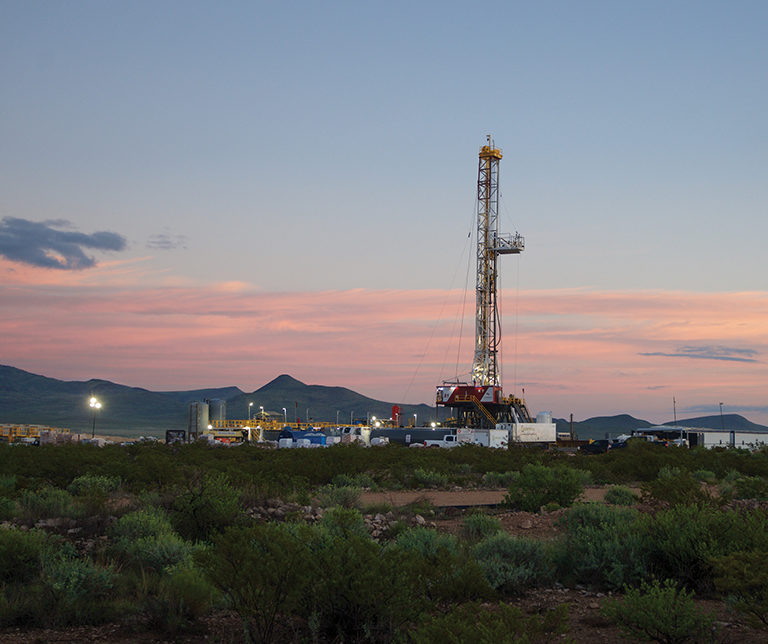 Photo courtesy of Apache
A drilling rig in the sunset works Apache’s Alpine High field in the southern Delaware Basin of west Texas, where the company recently made a major discovery.

Don’t look now, but the United States rig count has inched up in recent months, and the driver has been the old reliable of onshore oil production, the Permian Basin of west Texas and New Mexico.

While some observers might see the scenario as a simple case of drillers responding to the recovery of oil prices over the spring and summer, the fact that rig growth occurred chiefly in the Permian indicates there is more to the story. And along with a similar, smaller shift of gas rig activity toward the Marcellus and Utica basins in Pennsylvania and Ohio, the statistics suggest what the geographic footprint of an eventual, long-term recovery may look like in the US.

The number of active oil rigs nationwide rose to 407 for the week ending on 2 September, according to Baker Hughes, up from 316 for the week of 27 May. Of the additional 91 rigs, 65 were activated in the Permian Basin. Beginning from a low point of 132 rigs operating in the week of 29 April, the basin has added 70 rigs, and it currently has more than 50% of the horizontal oil rigs operating in the US, up from 15% in 2011.

A smaller growth trend has emerged in Oklahoma, where 10 rigs were added between 13 May and 2 September to bring the statewide total to 66. The increase has centered on the SCOOP (South Central Oklahoma Oil Province) and STACK (Sooner Trend, Anadarko [Basin], Canadian [County], and Kingfisher [County]) plays.

On the US natural gas side, the 88 rigs operating at the beginning of September reflected little change since spring. However, a shift in deployment had added six rigs to the Marcellus since 5 August and four rigs to the Utica since 20 May. The total number of rigs operating in the two basins were 27 and 14, respectively.