Refracturing Success Demands a Better Understanding of Past Failures 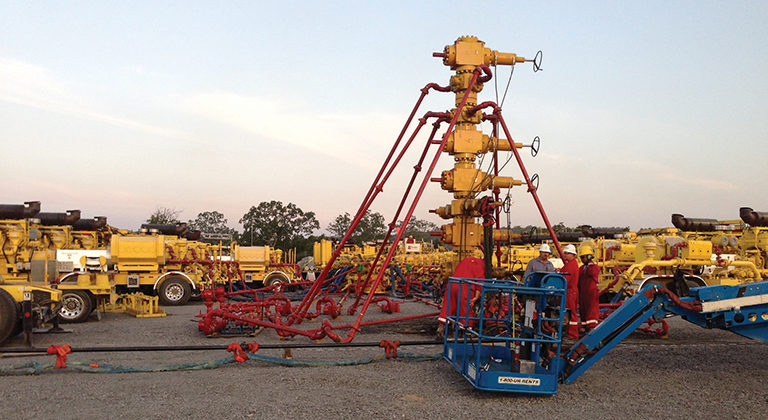 Courtesy of BP.
Pumping trucks are gathered around the wellhead for a refracturing job on a BP well in the Woodford shale in Oklahoma.

Refracturing older unconventional wells is likely to reward those willing to investigate the reasons why production declines and what can be done to restore it, according to George King, distinguished engineering adviser at Apache Corp.

King talked about what has been learned from refracturing wells, and why companies need to invest in answering the questions that remain unanswered in this young branch of the exploration and production (E&P) business. “We are going to have to look for better ways of fracturing initially and refracturing these wells,” he said during a webcast, which can be found under online events at SPE.org.

The immediate reward would be finding the best method for identifying wells apt to respond to treatment and developing cost-effective techniques to deliver it. Longer term, what is learned from the shortcoming of old wells can be used to improve the performance of new wells.

Past experience with refracturing has demonstrated the value of correcting past mistakes. A look at 13 wells refractured in the Barnett Shale in north Texas found on average that they returned to their initial production rate and added from 0.5 to 1 Bcf to their estimated ultimate recovery, King said. Devon Energy’s paper (SPE 154669) on the wells put the average cost of the restimulations at USD 900,000.

Early refracturing projects were designed to correct the errors made during the trial-and-error process used to develop the techniques now commonly used to exploit shale formations. Many were vertical wells with only two stages for hydraulic fracturing. The gelled fluids used then damaged the formations and created relatively short fractures.

When Devon refractured those 13 wells, it expanded the number of stages to three, used more sand to prop open the fractures, and pumped slickwater to create larger more complex fractures using a fluid formula with a minimum of chemicals. The paper said: “Initial results were mixed, but the economics have gradually improved by developing candidate selection criteria, and modifying the simulation design to contain costs.”

That comment can serve as a summary for refracturing work since then. Results are mixed and good well selection is a major determinant of success and  cost-effective methods for diagnosing and addressing problems are critical. Adding to the challenges has been the industry’s rapid shift to liquids-rich fields using horizontal wells, many more stages, and improved methods based on years of experience.

The combination of liquids-rich plays, such as the Bakken and Eagle Ford and changing completion techniques, raise new issues for the industry, King said. Refracturing interest in those plays is growing as wells reach the age where production has declined to the level at which refracturing becomes an option.

Based on past experience, success will depend on the wells chosen and the ability of companies to identify problems that can be economically remedied. While production from most shale wells declines steeply, the reasons for that vary. Understanding the root cause for lost output can mean the difference between success and failure when trying to revive an old well.

Refracturing a well where the problems are due to the rock is not going to pay off. Often a failure in refracturing indicates “there was not enough work on how much of the reserves are left to be recovered,” King said.

Geologic problems could be blamed on sections of the reservoir isolated by a fault, rock lacking adequate conductivity, or production lost to another well nearby, he said. Problems in the ground that limit production are common. He pointed out that in many wells with regularly spaced fractures, only 50% of wellbore was contributing. “We are wasting a lot of energy and money fracturing all of the wellbore when some of it didn’t have much potential to begin with,” King said.

Where reservoirs are productive, analyzing the output over time can be useful. King said a change in the ratio of gas to oil production over time can be an indicator of changes in the well. A rising gas/oil ratio can indicate the fracture network is shrinking, providing enough space for natural gas flow but not for oil production.

Generally speaking, the problem can be treated by using hydraulic pressure to reopen fracture networks and pump in stronger, long-lasting proppant. But when it comes to the details on how to do so, practical advice is limited. Little has been written evaluating successful refracturing projects and even less analyzing failures, King said.

King was peppered by questioners with practical concerns: what is the best method to use for fluid diversion techniques, how to pressure test old wellbores to ensure that they can stand up to refracturing, and whether to use current perforations or create new ones. He offered thoughts on that wide range of topics, but warned that many questions have yet to be answered.

A company considering a significant refracturing program on the order of 100 wells should consider creating a team of professionals, King said. “The learnings from that would cover cost many times over,” he said.

There are wells where a refracturing job would stand out as a technical achievement. “With refracturing, you are at the mercy of what is in the well,” King said. “The first completion is going to be the easiest. Redos are going to be more difficult requiring some thought and probably development of new tools.”

As companies become more interested in going back into wells, it could alter the decision-making process when completing new wells. “The best completion is the one that gives you the best flexibility with refracturing,” King said. That line of thinking can offer support for wider diameter casing and plug-and-perf completions.

And it may be wise to start with relatively modest steps. King suggested using coiled tubing to deliver a relatively low level of hydraulic pressure to clear out near wellbore obstructions, and a straddle packer to isolate the zone while doing so.

“Try putting a straddle packer on coiled tubing and go to each perforation cluster and hydraulically fracture it using high-quality proppant,” King said to listeners on the webcast, adding, “the few I have seen that have not worked all that well may indicate a reservoir problem rather than a completion problem.”

SPE 134330 Refracs: Why Do They Work, and Why Do They Fail in 100 Published Field Studies? by Mike C. Vincent, Insight Consulting.

Refracturing Success Demands a Better Understanding of Past Failures