US Approves BP’s use of Unmanned Aerial Vehicles in Alaska 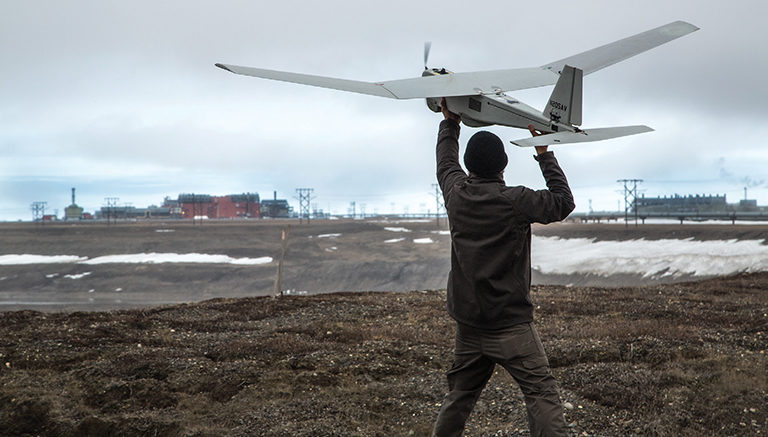 In June, the United States Federal Aviation Administration (FAA) issued the first approval for the overland use of unmanned aerial vehicles (UAVs) in Alaska. The authorization was granted to BP and UAV maker AeroVironment for aerial surveys of roads and pipelines in Alaska’s prolific North Slope oil fields. Last year, the FAA issued a more restrictive approval to BP and ConocoPhillips that allowed the companies to fly UAVs over Arctic waters, and only during optimal conditions.

BP and AeroVironment carried out the first approved flight on 8 June, using a Puma AE, a hand-launched vehicle that is 4.5 ft long with a 9 ft wingspan. BP intends to use the lightweight UAV for “high-accuracy” land surveys and for map making to identify maintenance requirements on roads and infrastructure. “The (unmanned aerial system) technology has potential to improve safety, efficiency, and the reliability of BP’s Alaska North Slope infrastructure and maintenance programs,” said Dawn Patience, a BP spokesperson.

For AeroVironment, the largest maker of UAVs for the US military, the latest approval offers the company a chance to demonstrate the benefits of the technology to both private companies that want to use the technology and the government, which is tasked with regulating it. “It is an important first step in introducing the capabilities that small unmanned aircrafts deliver for a large number of commercial applications,” said Steve Gitlin, vice president of marketing and communications for AeroVironment.

Gitlin added that the process that BP and AeroVironment followed to obtain approval was very similar to the process commercial airline companies follow to be granted restricted licenses. “From that perspective it is ground breaking,” he said. “Our hope is that this is the first of many (approvals) to come.”

Earlier this year, the FAA announced the selection of sites in Alaska, Nevada, New York, North Dakota, Texas, and Virginia where UAV testing and research will be used to help the agency integrate the technology into the US airspace. Establishing testing sites was part of a 2012 law passed by the US Congress that also ordered the FAA to permanently allow for the use of small UAVs in Alaska’s Arctic areas. “These surveys on Alaska’s North Slope are another important step toward broader commercial use of unmanned aircraft,” said Anthony Foxx, US transportation secretary, who oversees the FAA. “The technology is quickly changing and the opportunities are growing.”

US Approves BP’s use of Unmanned Aerial Vehicles in Alaska

A Look at the Aasta Hansteen Norwegian Deepwater Spar FPSO

The complete paper describes the overall project execution of the Aasta Hansteen field development on the Norwegian Continental Shelf (NCS) north of the Arctic Circle. It is the deepest field yet developed on the NCS in 1300 m of water.