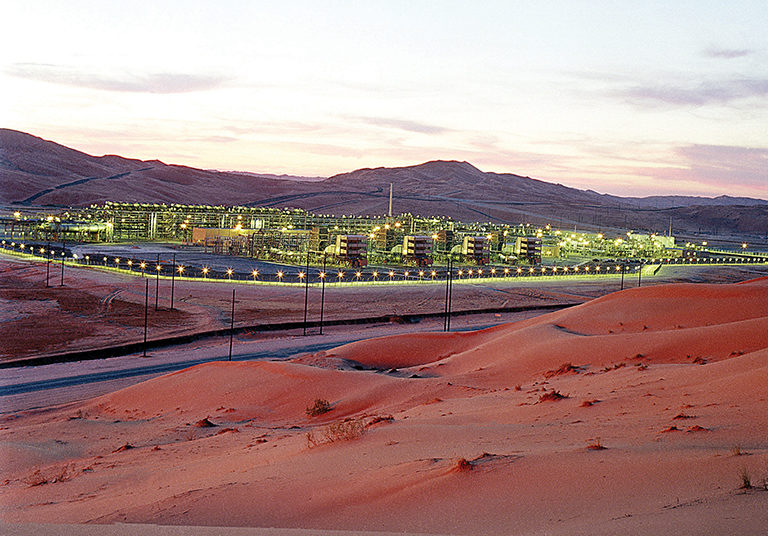 Saudi Aramco’s Shaybah oilfield, which came on stream in 1998, has estimated reserves of more than 14 billion bbl of oil.

Saudi Aramco is working on slashing the production cost of tight formations to around USD 2 to USD 3 per thousand cubic feet in the next couple of years, according Adnan Kanaan, manager of the Gas Reservoir Management Department (GRMD) at Saudi Aramco.

Kanaan said that his company  expects to reach its target that may lead to a break-even cost that would equal the best unconventional plays in the US. “We are seeing good signs from the sandstones and good costs in our drilling and completions,” Kanaan said during the 21st World Petroleum Congress held recently in Moscow.

The company has conducted work on tight sands reservoirs where permeability and porosity is greater than that of shale formations but below that of conventional oil and gas bearing sands. “We do have shale, but shale will take a little bit more time because we need to go with the low-risk, high-reward projects to get our revenue,” Kanaan said. “But definitely shale is part of our focus area, and it is part of the exploration and appraisal.”

In recent years, Saudi Aramco has made significant progress with its unconventional resources, where it started making allocations for industrial projects in Saudi Arabia, the company said in its 2013 annual review.

The company said its unconventional gas program became fully operational in 2013, only two years after launching its own unconventional gas program in the frontier Northern Region, offering new resources for the country’s energy needs. The company said that it is ready to commit shale gas for the development of a 1,000-megawatt power plant that will feed a massive phosphate mining and manufacturing sector. “Saudi Arabia will be among the first countries outside North America to use shale gas for domestic power generation,” the company said.

It has also made significant progress in developing hydraulic fracturing technologies as part of its efforts to push for new and better ways to conduct fracturing operations with the least environmental impact possible.