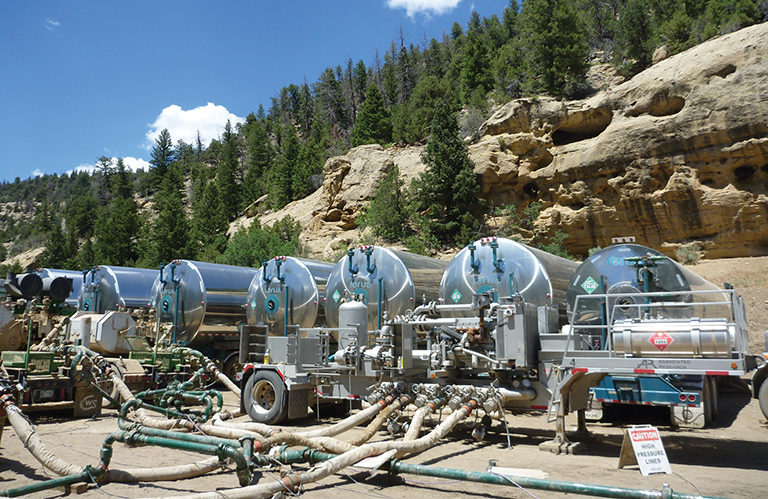 Photo courtesy of Ferus.
As an alternative to slickwater, an energized fluid containing carbon dioxide is pumped into a horizontal well during fracturing operations in the Mancos shale play amid the rugged terrain of Grand County, Utah.

In the years since George Mitchell’s engineers first used the cocktail of water, sand, and a small batch of chemicals called slickwater to crack open the Barnett Shale in north Texas, trillions of gallons of the low-viscosity mixture have been pumped into shale formations all over the United States and Canada. While the resulting shale revolution owes much of its success to the use of slickwater, it has come at a high cost in terms of dollars and increased public scrutiny.

In response, a growing chorus of suppliers, researchers, and service companies are on a mission to get operators working in North American shale plays to re-examine their almost exclusive use of slickwater and consider displacing large volumes of it with carbon dioxide (CO2) and nitrogen (N2).

Those in the industry pushing the change say the “energized” fracturing of horizontal wells is a proven technology that stands to improve the economics of completions and the productivity of horizontal oil and gas wells. They point to a growing body of evidence from both Canada and the US that shows energized fractures greatly reduce the amount of water and proppant required to stimulate shale formations, and have the potential to increase recovery rates substantially. Internationally, the technology could help speed up lagging unconventional shale development by alleviating water scarcity issues. Proponents of the technology offer a variety of reasons why it has not been adopted on a wider scale including perceived cost issues, logistical limitations, supply constraints and, some say, the factory-mode mind-set of many operators that leaves little time to test and evaluate new completion methods.