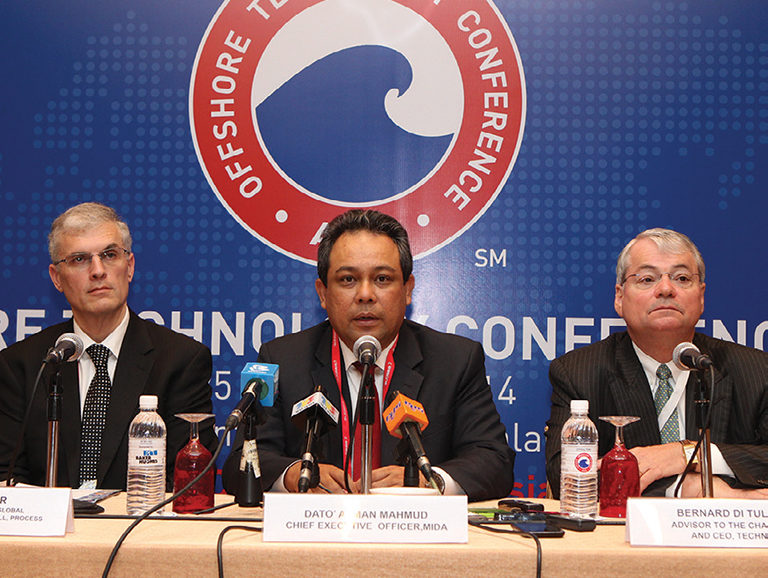 From left, Paul Bonner, Dato’ Azman Mahmud, and Bernard di Tullio speak at the country session that addressed Malaysia as a regional oil and gas hub.

Malaysia has set its sights on the elevated position of the energy hub of Asia, despite a resource base that is modest compared with some of its neighbors.

The reality for Malaysia, according to a panel on the country’s energy outlook at OTC Asia, is it will have to work hard to restore its energy production to what it was a decade ago. But, its plan to reach that difficult goal could create opportunities extending well beyond its borders.

Domestic exploration and production, which peaked at 862,000 B/D, has sunk to 420,000 B/D, “but it is trending up, and there is a lot of capital going into projects to bring it up again,” said Paul Bonner, vice president of global oil and gas business at Honeywell Process Solutions.

The most obvious gains are in field development work as Petronas ramps up its spending and the government’s energy authority opens up new opportunity to attract more investment from a range of international oil companies.

Malaysia plans to develop 100 marginal fields and conduct four offshore enhanced oil recovery (EOR) projects and is seeking teams of operators and service companies willing to take on the challenges in exchange for some sweeter contract terms.

Marginal fields are those where the reserves are small relative to the cost of developing them, often because the level of contaminants, such as carbon dioxide, is high or the location is far from pipelines. Offshore EOR is still relatively new and comes with the added burden of old hardware in the field.

For service providers, helping solve those problems should be a plus. “There are new opportunities for the oil and gas companies that will drive the service sector,” said Ed Bassett, vice president of business development in southeast Asia at Petrofac, an engineering, procurement, and construction firm.

To reach its goal of becoming the energy hub, Malaysia will need to leverage this investment in ways that go well beyond gas production statistics. Its goals include building local companies, attracting international expertise, and becoming a center for technology development.

While it works to revive production, it is developing expertise in dealing with problems that are common in other countries. It is also working to bring business centered in Kuala Lumpur, boost support service companies born in Malaysia, fill the storage facilities and pipelines it builds, and locate Asian offices in Kuala Lumpur.

“We have learned to cope with changing business needs,” said Dato’ Azman Mahmud, chief executive officer of the Malaysian Investment Development Authority. The list of things that need to be done includes

Equally as important is building the country’s reputation as a center for oil and gas skills.

Many field development deals require local operators and service companies to be included in the partnership so they can learn from the experience.

The long corporate name reflects the complex history and range of services offered by the company, whose rapid growth has been a model for other local companies starting out with a single work boat and the hope of being a global player someday.

SapuraKencana employs more than 10,000 workers in a diverse range of subsidiaries, touching nearly every aspect of the offshore operations, from fabricating structures and laying pipelines to seismic surveys and exploration and production.

“This is a Malaysian company that has gone global, having Malaysia as a hub,” Kris said. “Today, our vessels are working all over the world and we are one of the largest oil and gas contractors.”