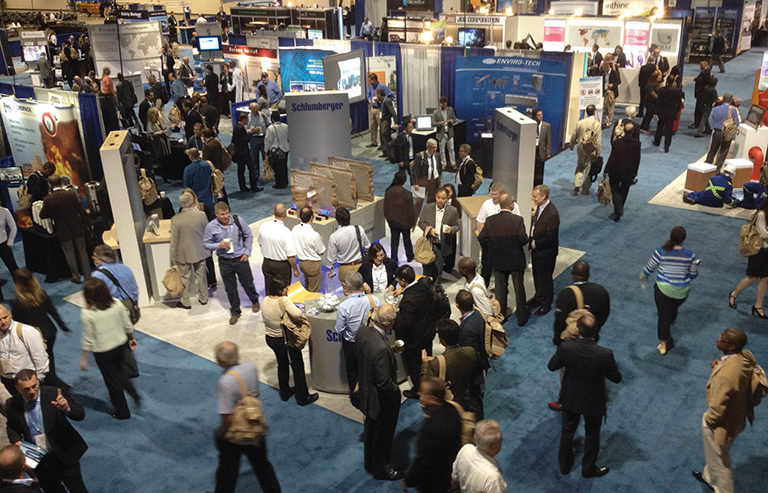 More than 1,000 people gathered in Long Beach, California, in March for SPE’s 2014 International Conference on Health, Safety, and Environment (HSE). In addition to the opening and closing sessions, the conference consisted of three plenary sessions, 13 panel sessions, and 44 technical sessions that presented more than 200 papers.

Marcus and McNulty presented the idea of what they call “meta-leadership,” based on their research into the responses to the Boston Marathon bombings of 2013, Hurricane Katrina, and the Macondo oil spill disaster in 2010. Meta-leadership, Marcus said, involves leadership that reaches “beyond the confines of your particular role or position.”

Marcus and McNulty said that, during times of crisis, people’s brains respond by “going to the basement.” This refers to the instinctual responses of freeze, flight, or fight. During those moments, McNulty said, “all your brain is focused on survival. You can’t do any complex problem solving. You’re not very productive in terms of figuring out what’s actually going on.” The key to successful crisis management, he said, is to get out of the basement as quickly as possible in order to make sound decisions.

“You, as a crisis leader, have to be smarter than your brain,” Marcus said. This return to rational decision-making can be made by sending a second signal to the brain. This second signal can be as simple as taking a deep breath or counting to 10. With practice, one can build a second neural pathway to speed one’s return to productive thinking.

Crisis leaders must also be able to see the entire situation and realize that every crisis is actually many crises. “Being able to understand the bigger picture is part of the leadership responsibility,” Marcus said. Meta-leaders must also realize that their decisions can create more crises, especially if they are mentally still “in the basement.”

The two speakers also identified a phenomenon known as swarm intelligence from their studies of the response to the Boston Marathon bombings.

Immediately after the bombing, the researchers began studying the leadership responses. They began by asking various responding agencies who was in charge. “The further along we went, the more we came to the conclusion that nobody was in charge,” Marcus said. “And, yet, they worked together so well, with such extraordinary cooperation.”

The speakers attributed the success of the response to swarm intelligence, a concept that began when scientists wondered how termites were able to create huge structures without a central leadership. “There’s not a commander termite with a blue hat on with a big sheet” telling other termites what to do.

Marcus and McNulty said the response to the Boston bombings was the first time they had seen this behavior with people, “and we think the first time it’s occurred,” Marcus said. “In this event, the leaders were able to achieve something that we’re identifying as swarm intelligence.”

They have identified five aspects of achieving swarm intelligence, all of which were present during the response to the bombing—unity of mission; generosity of spirit; staying in your lane, or doing your job and trusting that others are doing theirs; no ego, no blame; and a foundation of relationships. “Because nobody broke any of those five rules, in 102 hours, they were able to go from two explosions on Boylston Street to apprehension of the two suspects and bringing the community together.”

“One of the great things about you all coming to a meeting like this,” McNulty said, “you get to meet each other and cross organizational boundaries over a cocktail and get to know each other, so you can work together when the worst happens.”

The three plenary sessions at the conference tackled diverse and sometimes contentious areas within the oil and gas industry’s health, safety, and environment discipline. The first of the three was titled, “What Should Keep Line Management Up at Night?” The session’s speakers were Ford Brett, chief executive officer (CEO) of PetroSkills; Walt Shill, CEO of ERM; Steve Kropla, executive vice president of operational integrity at the International Association of Drilling Contractors; and Thierry Debertrand, senior vice president of HSE at Total.

Keeping up with changes in the industry is one of the largest issues the speakers said should keep managers up at night. “Is your HSE organization adapting fast enough?” Shill said. “Probably not.”

The conference’s second plenary session, titled “What Needs To Be Done To Maintain/Retain Our License To Operate,” featured speakers from outside of the industry to give varying perspectives on maintaining the social license to operate.

Transparency emerged as one of the more important requirements, according to the panel, which consisted of Stephen Newton, CEO of Equitable Origin; Michael Engell-Jensen, executive director of the International Association of Oil and Gas Producers; Allan Lerberg Jorgensen, department director of human rights and business at the Danish Institute for Human Rights; and Miriam Potter of Robin des Bois, a nongovernmental organization (NGO).

Engell-Jensen went on to introduce what turned out to be the major theme of the discussion. “If I had only one word,” he said, “I would say transparency. Transparency is where we need to get to, and that is a very, very difficult thing. But, we have to do it. We have to take the journey. Why? Because transparency is a prerequisite for trust. We are one of the most mistrusted industries … . It is up to us to change that.”

Potter said that the industry’s reaction to accidents and pollution shapes the way it is perceived by the public. “Concerning accidents … upstream and downstream planning and transparency are key concepts. You must be the first to notice and react,” she said. “If the public reacts, if the public notices before you, if NGO’s notice before you, it’s not good.”

Potter continued by pointing out barriers she sees to a positive public perception of the oil and gas industry. “Your image is not just impacted by major pollution and major accidents … . Your image is polluted by small accidents as well and by people seeing pollution in their daily lives,” she said. “A cleaner image for the industry will only come if the industry itself is cleaner.”

All the panelists agreed that educating the public about the oil and gas industry is a major step toward improving transparency and maintaining the social license to operate.

When asked if improving public education about the industry is the answer to the challenge of maintaining the social license to operate, Newton answered, “It can’t do any harm, that’s for sure. I think the more people know, the more they’re going to understand. They may never like the oil industry, but at least they will understand that’s how their cars run, that’s how their lights come on.”

“The bottom line is it is increasingly more important for trust between the public and oil and gas companies to be restored,” Newton said.

The third plenary session was titled, “Can You Prepare for the Unexpected? What Does the Future Hold?” and addressed preparedness and security in the industry. The panel members were Myles Christopher Druckman of International SOS; Helge Haldorsen, vice president of strategy and portfolio at Statoil USA and 2015 SPE President; Cheryl Mackenzie, an investigator at the US Chemical Safety and Hazard Investigation Board; and Jean-Louis Kibort, head of security, marketing, and services at Total.