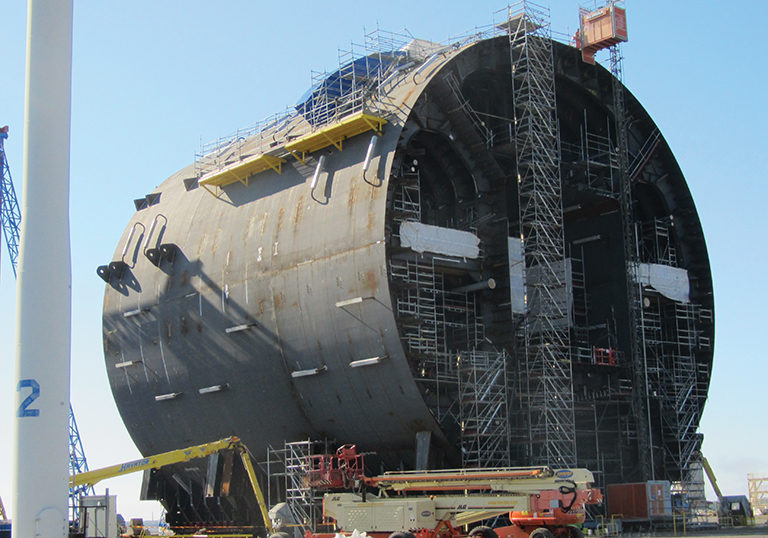 Photos and images courtesy of Technip.
A portion of the Lucius spar hull under construction in Finland. Paris-based Technip is in various stages of construction on four deepwater platforms for the US Gulf of Mexico, North Sea, and Asia Pacific areas.

Today’s deepwater projects are not just larger and more expensive than in years past. They are the most technically demanding projects the oil and gas industry has endeavored to undertake since stepping out from the continental shelf, and will require more new technology than ever to successfully execute. The extreme environments of deepwater fields are driving the complexity of these megaprojects to new heights, with shorter deadlines to help offset production declines. Among the companies capable of carrying out these record-setting field development projects is installation and subsea construction firm, Technip.

On a recent visit to the company’s North American headquarters in Houston, Thierry Pilenko, chairman and chief executive officer of Technip, said his offshore clients are spending more money to produce the same amount of hydrocarbons they did a decade ago. “Ten years ago, one company was talking about five major projects, which were larger than USD 1 billion,” Pilenko said. “Now, they have several projects that are larger than USD 10 billion and 10 other projects that are more than USD 1 billion.”

The price tags of these projects have “exploded,” Pilenko said, because offshore oil and gas reservoirs are getting harder to find. So too is the challenge of safely producing those hydrocarbons and bringing them to the surface. “Today, we know how to drill at 3000-m depths,” he said. “But we are just learning how to produce it with qualified production systems.” Pilenko explained that the industry is not just pushing the frontiers of technology, but also geography. Offshore Africa, oil companies are proving how subsea fields can be developed with little to no onshore support infrastructure.

One of the latest examples is the Moho Nord field, offshore Congo, where Technip will deploy some of its pipelaying and construction vessel fleet to install the entire subsea production system for operator Total. In terms of the scope of work, the project will be the largest subsea development that Technip has ever been awarded. The company will put into use many of its key assets to make and install the components of the subsea field that include 142 miles (230 km) of rigid pipeline, 14 miles (23 km) of flexible flowlines, and 31 miles (50 km) of umbilicals to deliver chemicals and power to the more than 50 subsea structures to be installed.