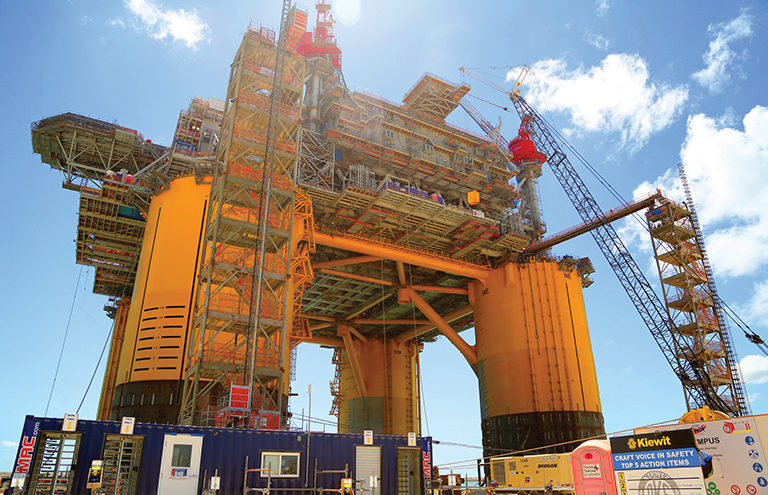 Photo by Robin Beckwith
The Olympus tension leg platform (TLP), shown at a Texas shipyard, is Shell’s largest TLP in the US Gulf of Mexico. Construction began in 2010.

As the towering Olympus tension leg platform (TLP) entered service in July, it marked the beginning of a mission to extend one of Shell’s most productive deepwater projects in the US Gulf of Mexico (GOM) to at least 2050. The oil company said this is the first time an additional deepwater production facility has been added to an existing field in the GOM.

Shell expects to begin first production from the newly commissioned Olympus TLP at the Mars field next year. The Olympus is the largest TLP the company has  deployed in the GOM. The Mars field is located about 100 miles south of New Orleans in approximately 3,100 ft water depth. With 24 well slots, the Olympus TLP will produce up to 100,000 BOEPD from Shell’s West Boreas, South Deimos, and Deimos discoveries. The reservoirs are located at depths ranging from 10,000 ft to 22,000 ft.

When the Mars field began production in 1996, Shell estimated  up to 700 million BOE of recoverable reserves. Since then, the field has produced more than 770 million BOE, and it is estimated that there may be 1.1 billion BOE yet to be produced. Shell is calling the field extension project Mars B.

Shell has gone to great lengths to plan for a decades-long development that ties in new innovations with lessons learned from five other TLPs that Shell operates in the GOM. “It is a next-­generation [TLP] just in the sheer size and capability we have with this rig,” said Arno van den Haak, Shell’s well delivery team lead for the GOM.

At 126,000 tons, the Olympus TLP is more than twice the displacement of the neighboring Mars TLP located only a mile away. The Olympus TLP’s drilling rig has a 2-million-lbm hook load, double the load of the Mars TLP rig, giving it the capability to drill and complete wells at depths of up to 35,000 ft—the deepest for a Shell platform.