The Next-Generation Water Filter for the Oil and Gas Industry

Many segments of the oil and gas production industry need improvements in water filtration over traditional methods. This is true because of the trend toward oil and gas production in tighter, less permeable reservoirs and the greater use of enhanced oil recovery (EOR) techniques, many of which involve injecting water into the oil reservoir. To protect the integrity of such reservoirs, the amount of solids introduced into the reservoir through water injection, even solid particles down to 1 µm in size, must be minimized. Conventional filtration methods generally do not meet this requirement. An enhanced filtration technology known as Spectrum Plus Filtration, which incorporates the use of granular micro media, has been proven in other industrial applications and has been introduced and successfully proven in the treatment of produced water. This technology holds the promise of meeting the new requirements while being economical and robust.

In response to the concerns that solids injected into wells can have, specifications for the water quality being injected into such wells are increasingly being defined by a particle size cutoff at about 2 µm, with many specifications requiring that 95% to 98% of the particles greater than 2 µm are removed.

Some other new production practices involve other water conditioning process equipment, which in turn requires excellent filtration for it to perform properly.

Table 1 lists some traditional water filtration technologies and their limitations in meeting the new requirements. 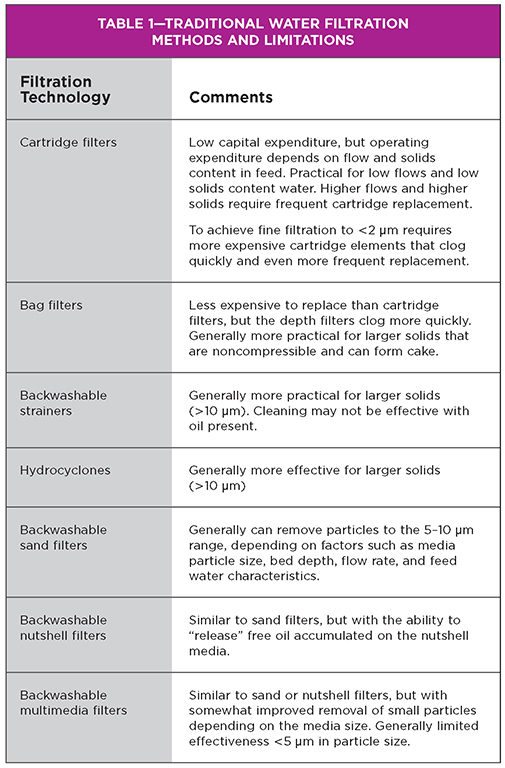 When alternative filtration technologies have been considered in recent years, the discussion often turns to membrane filtration using polymeric, or more recently, ceramic or metallic membranes, which are rated as microfilters or ultrafilters depending on the pore size of the membrane. Although such filters have had some success in industrial applications, they have not been widely deployed in the filtration of produced water for a number of reasons:

An alternative filtration technology has been introduced that fulfills the promise of meeting the new filtration requirements without many of the drawbacks of membrane filtration. This new process is known as granular micro media filtration. Fig. 1 illustrates the key difference between this filter and a conventional nutshell or sand filter.

The granular micro media filter has an upper layer of nutshells or anthracite to remove larger particles and oil droplets. It also has a lower layer known as micro media, because of its much smaller particle size in comparison with the upper layer media. A key feature of the micro media is that it is also much denser than the upper media. This ensures that after backwashing, during which both media are fluidized simultaneously, the dense micro media quickly settles to form a distinct layer below the coarse upper media layer. This allows it to act as an integral polishing filter capable of removing much smaller solid particles and oil droplets, which normally pass through a conventional media filter.

Such filters were developed and have been in operation for more than 20 years in a variety of process applications including prefiltration of surface and well waters for demineralization.

Field testing was carried out on commercially operating filters at eight sites near Bakersfield. Four sites were operating granular micro media filters and four sites were operating either nutshell filters or sand filters. The granular micro media filter sites performed significantly better than the conventional sites. Conventional filters removed 74.9% of TSS fed to them while the granular filters removed 99.8% of solids (as measured by the standard method, using 1.2 µm Millipore discs). Free or dispersed oil removal was 26.1% by conventional filters and 91.8% with the granular filters.

In addition to the data that overwhelmingly showed the superior performance of the granular micro media filters, photos of the Millipore discs used for determining the TSS showed positive results. Despite the fact that considerably greater water volumes had to be passed through the discs to develop enough material to be weighed for the analysis, the discs’ markedly lighter appearance after the granular micro media is further evidence of a performance advantage.

The oil and gas industry is evolving in the direction of greater reliance on EOR techniques to recover greater quantities of oil from mature reservoirs and to recover oil from tight, lower porosity reservoirs. The success of many of these processes could be improved if the water injected into these reservoirs contained fewer solids. This is being recognized in the industry as seen by specifications for injection water quality that increasingly require significant removal of solids down to 2 µm in size. Filtration to this level would also result in a significant removal of sulfate-reducing bacteria being injected downhole. Conventional filters (nutshell, sand, cartridge, etc.) are generally not capable of meeting such limits. Membrane filters, which may be capable of meeting this performance, in addition to being very costly, are challenged to treat produced water without fouling. The performance and operability of granular micro media filters as shown to date, with the ability to remove solid particles and oil droplets to 1 µm in size, make them an attractive consideration for a variety of water treatment applications in the oil and gas industry in the future.

The Next-Generation Water Filter for the Oil and Gas Industry