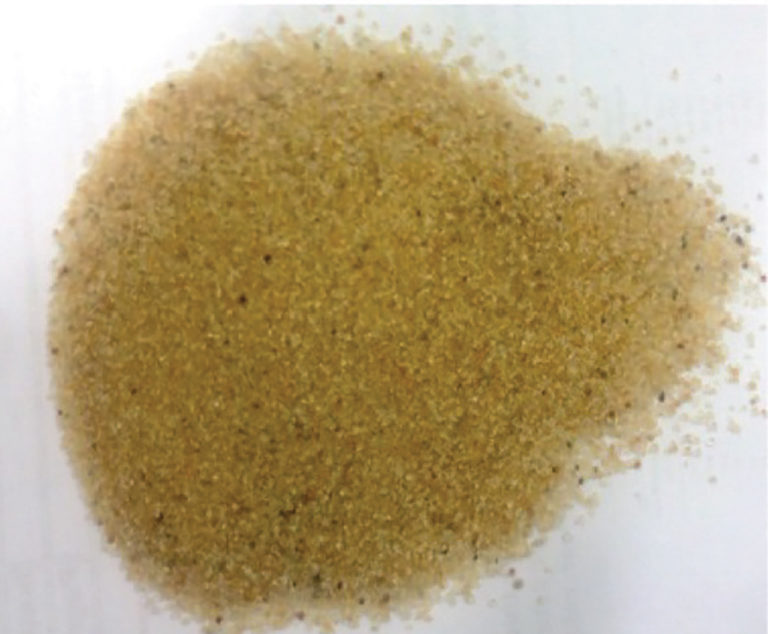 Sustaining the fast economic growth in Saudi Arabia requires a ramp up of the gas supply. A strategic objective of Saudi Aramco is exploring and developing deep and unconventional gas reservoirs, many of which are considered extremely tight. These formations need hydraulic fracturing to allow the hydrocarbons to be efficiently produced. Unlike in North America, the infrastructure to commoditize the drilling and production processes is immature in Saudi Arabia. Therefore, many cost-reduction measures have to be exhausted, especially on materials. Proppant is the main material used in fracturing and, therefore, reducing its cost affects greatly the economics of any fracturing operation.

Although the country has abundant natural sand resources, the strength of the sand is insufficient to withstand closure stress in most of the gas reservoirs. New technology can enhance the local sand strength to make it deployable in deep formations with closure stress greater than 10,000 psi.

The company is developing new technologies to further maximize the economics of hydrocarbon resources and to promote growth of the domestic economic potential by becoming a potential exporter of upstream oil and gas technologies and products. With increasing hydraulic fracturing activities in the country, Saudi Aramco is carrying out multiple hydraulic fracturing research and development programs in its upstream Advanced Research Center (EXPEC ARC). One of the most important initiatives is to enable fracturing with Saudi local sand.

A short-term solution is to integrate the local sand in a pillar fracturing technique. The pillar fracturing creates aggregated and competent sand piles. Among the sand piles are open channels to allow hydrocarbons to flow freely into the wellbore. Pillar fracturing design provides the benefit of rapid fracture cleanup and, therefore, maximizes initial production rates as well as long-term sustained productivity. Various chemical and physical means are being investigated to stabilize the aggregated sand piles so that the fracture propping pattern is sustained over the life span of a well. The goal is to properly use this low-cost resource with sound engineering practices to achieve a cost-effective fracturing technique.

The mid-term solution is to develop new materials to coat the sand grains so that the actual strength of each individual sand grain is significantly increased. This will broaden the range of the applicability of the Saudi local sand to fracturing treatment designs by allowing the use of the local sand in conventional proppant packing pattern instead of being limited to the pillar fracturing techniques.

EXPEC ARC’s unconventional re-sources department and a technology collaborator have worked together in defining R&D protocol and performing lab tests on the pillar fracturing technology with Saudi local sand. The lab testing showed that pillars created by Saudi sand and a chemical agent can withstand closure stress greater than 12,000 psi. Parallel testing using commercial high-strength proppants indicated comparable performance. The effluent contained nearly no fines nor crushed particles, and the conductivity remained near infinite, indicating the flow channels are propped open effectively even at very high closure stress. Table 1 illustrates the performance of the material. 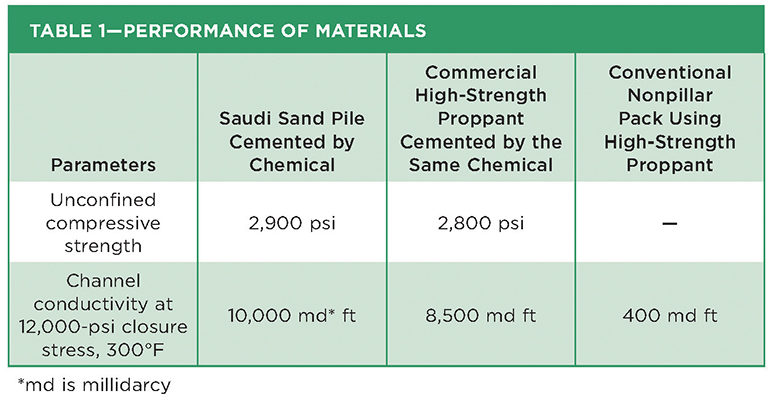 Saudi Aramco is planning field trials to begin in early 2016. The cost of the proppant material in fracturing is expected to be reduced by at least 50% using this technology combined with Saudi local sand. The next phase of development is to find low-cost chemical means to enhance the sand grain strength.