Ohio Study Tries To Pin a Number to Earthquake Risk 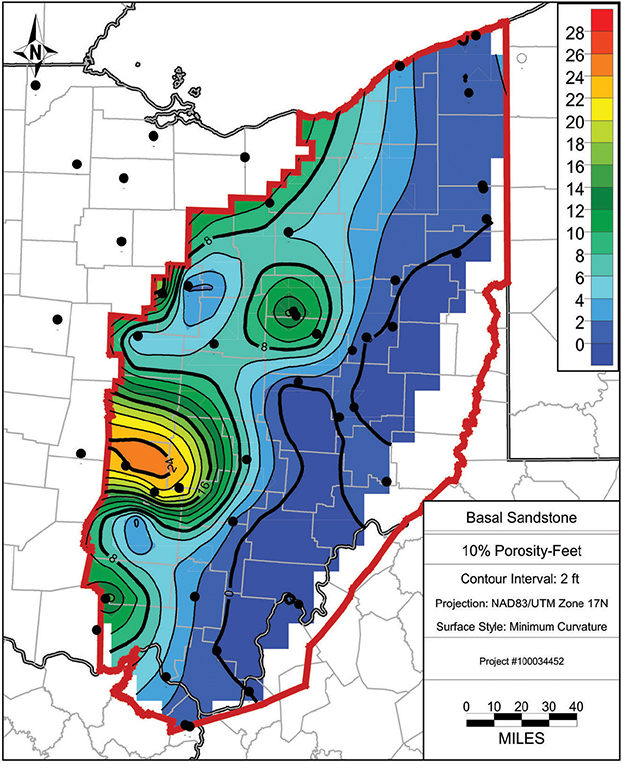 Image courtesy of Battelle.
A map of eastern Ohio shows the estimated wastewater fluid storage capacity of the region’s subsurface. Researchers are hoping to use these data to help disposal well operators know which parts of the state are most susceptible to injection-induced seismicity.

Research and development firm Battelle is working on a new induced-seismicity study that aims to help wastewater disposal well operators in Ohio stay on the good side of state regulators.

Expected to be completed later this year, the company says the study will be the first to quantify a disposal well’s potential to cause an earthquake.

Concern over disposal wells in Ohio was brought to the fore when a series of earthquakes jolted residents of Youngstown, Ohio, in late 2011. A disposal well near downtown was assigned responsibility for the tremors and regulators responded by shuttering that well along with several located nearby—the scenario Battelle is hoping its study can prevent from happening again.

Several independent operators in Ohio are forming a joint industry project to help fund the study and though incomplete, Battelle has already identified a number of locations in the state where those companies may want to think twice about drilling a new disposal well.

Mishra said the high-risk areas have low storage capacity and tight rocks which limit the rate of injection, and are close to fault zones. Researchers are also using other risk factors, which include the depth of the target formation and the history of natural seismic activity in the area.

These data points are used to create a fluid flow analysis model that predicts the pressure buildup in a formation as a result of a specific volume of injected waste water. “Then we couple that with a geomechanics model that will say ‘If this is the pressure, then that will translate to this level of stress change, which can produce an earthquake or seismic activity of this magnitude,” Mishra said.

This means that operators will also be able to use the data to determine how much waste water they can inject into a particular well or particular areas before they are likely to trigger a seismic event. This would allow those companies to self-impose a limit on injections in order to avoid regulatory actions.

Mishra said some of the work that remains to be done includes filling in data gaps from areas of the state where there is a low density of disposal wells and thus less geologic information.

The results of the study could have a big impact on the future of Ohio’s disposal well business since the state not only handles its own waste water but also imports much of the waste water generated in neighboring Pennsylvania. Because of Pennsylvania’s strict regulations, there are only 11 disposal wells in the state compared with more than 200 in Ohio.

Mishra said similar studies could be carried out for other parts of the country but Ohio was selected to be the first because Battelle had already built up a large database of geologic information from an earlier government-funded study on the state’s CO2– and wastewater-storage potential.

Ohio Study Tries To Pin a Number to Earthquake Risk