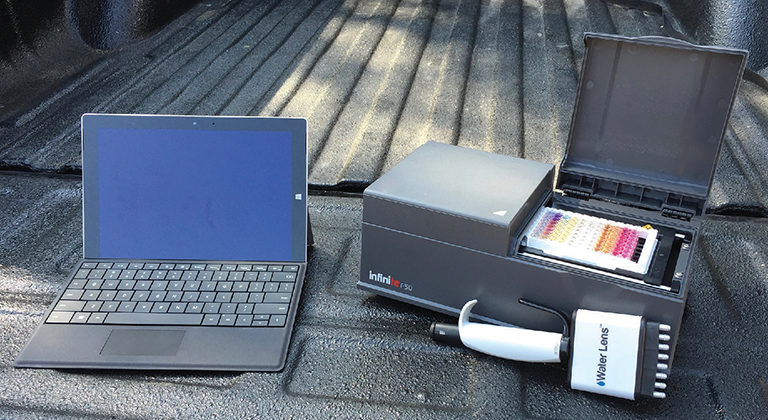 Analyzing the properties of produced water is a difficult process because of the extreme levels of suspended and dissolved particulates contained in it, and a chemistry profile that is in constant flux.

But the transition from using fresh water to recycling produced and flowback water for hydraulic fracturing in North America has driven the need to improve how oilfield water sources are analyzed.

Houston-based Water Lens is one of the latest companies to jump into the testing device market with a portable system it developed to generate rapid answers on water quality from the field—offering producers an alternative to sending samples to laboratories and waiting weeks for results.

Keith Cole, the chief executive officer of Water Lens, said the new technology was designed to measure the key parameters shale producers need in order to properly condition produced and flowback water for reuse. The company is also emphasizing that continuous testing of water sources would represent a strong measure of quality control for completions fluids.

“If you know what’s in the water, then you know what amount of chemicals you should be adding and can effectively blend it,” Cole explained. “So the more important chemistry is to your operations, the better of a fit we are.”

Highlighting the practice of storing water in lined pits as an example, Cole said operators have a tendency to run tests on this water source once every few fracturing treatments. The assumption is that the water’s chemistry is reasonably static.

“In practice, that’s not true,” he said. “The pits have varying water qualities from the top, middle, and bottom to the front, middle, and back.” Pit conditions may also change during the pressure pumping operation as more water is added from different sources.

Listing other reasons operators should test water more frequently, Cole said detecting a change in the levels of magnesium or calcium in produced water may mean that scale or corrosion treatment chemicals are ineffective.

Variations in salinity during the flowback stage might indicate that an induced fracture extended beyond the target zone. And maybe that last fracturing stage didn’t get propped effectively because something in the water degraded the proppant-delivery chemicals.

To use the Water Lens device, a field worker takes a water sample and injects it into a disposable test tray. The tray is then loaded onto a chemical reader and after 10 minutes, the results are in.

The company went commercial with the device last year after about 4 years of researching and developing chemistry techniques and proprietary data analytics software. The company believes those efforts have produced a system that can outperform conventional field testing kits and third-party labs.

Cole said conventional instruments and methodology developed half-a-­century ago were never designed or updated to handle the high salinity of produced water. In his opinion, the field testing sector “quit innovating.”

Adam Garland, the chief scientist at Water Lens, explained that the technology he helped create delivers more accurate measurements because it was designed for high salinity and to account for the majority of known interferences—chemicals that make it difficult to measure another chemical properly—found in produced water.

“You have to be able to deal with the interferences,” he said, adding that the device’s software runs a dozen different tests to “know what they are and how much is in the water” and then adjustments are made to correct the measurements.

In addition to its promise of 10-­minute test times, the company is also counting on its low price point to encourage companies to test their water more frequently. Each tray can be customized to test up to 20 inorganic parameters at a time, including pH, alkalinity, boron, calcium, magnesium, and total dissolved solids. The test trays range in cost from USD 150 to 250, depending on the number of parameters being tested and the number of trays purchased. The testing hardware is lent to users at no cost.

The company is seeking opportunities to expand the use of its testing device for drilling fluid monitoring, cement quality verification, and flowback analysis. Cole said by monitoring flowback ­fluids multiple times a day, operators may save money on crew costs by knowing they can switch to production mode earlier than their predetermined schedule calls for.

Because the technology does not constitute a lab, it is not eligible to be lab-certified but the company says that it nonetheless holds itself to the same standards as accredited labs. It also said that its current clients have not taken issue with this.

Over the next 6 to 12 months, the company plans to add at least 10 more parameters to its testing system including BTEX (benzene, toluene, ethylbenzene, and xylenes) and hydrogen sulfide, Acid-producing bacteria and sulfate-reducing bacteria, two microbial properties that Water Lens said are not currently possible to quickly and accurately quantify in the field, will also be added.