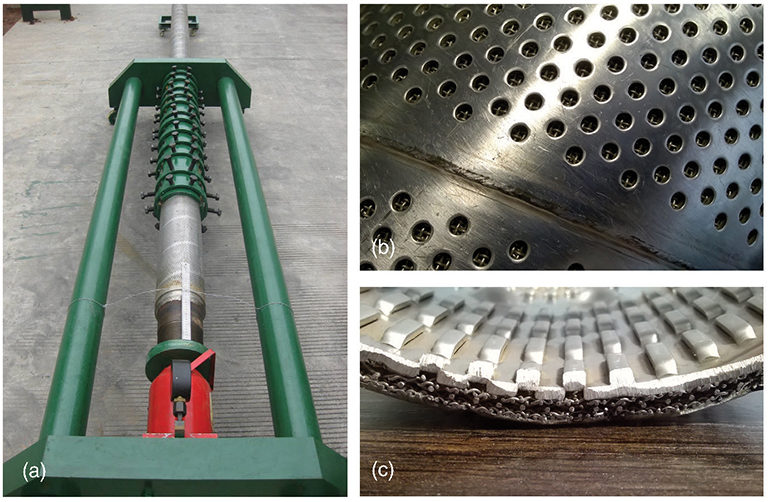 Source: Tendeka
Fig. 1: The FloMax Elite sand-control screen is shown (a) undergoing an outer shroud pull test and in close-up views of (b) the outer shroud and (c) the mesh layers.

The pursuit of hydrocarbon reserves and increased oil production means that operators continue to look to prolific high-permeability, clastic reservoirs that can be found in basins around the world.

The use of high-deviation and horizontal well trajectories in these fields increases the amount of reservoir contacted by the wellbore, which improves productivity but increases the challenges of sand control.

Practical sand-control options for these wells include gravel packs, standalone screens, and slotted liners. The lower flux rates in extended-reach wells, and the high cost of gravel packing mean that operators are increasingly turning to standalone screens as the solution.

However, the choice of screen will depend on the particular application to ensure that the well completion can retain the sand, avoid plugging and erosion, and maintain mechanical integrity.

Subsea deployments, exits through milled windows, and long horizontal wells with swelling shales or unstable boreholes require a more robust and mechanically stronger solution. Other, less challenging wells may not require this level of mechanical performance yet still may need a sturdier sand-­control solution than the use of standard screens.

Weighing costs and benefits has become increasingly important in the current economically challenging environment. Operators cannot afford to use over-engineered solutions and demand a more focused option to fit their needs. Specifically, there is an increasing need for screens that are engineered to reduce cost and maintain performance but are stronger than a traditional screen.

An effective sand screen is designed to allow the larger formation particles to bridge across the openings to offer maximum fluid flow area and reduce plugging. Smaller formation particles are then retained behind the larger “bridged” particles. Premium screens incorporate layers of metal mesh or weave to handle a larger range of particle sizes while increasing the fluid flow area and providing greater mechanical strength and erosion resistance.

The selection of screen is highly dependent on the size and distribution of the formation solids produced. Screens can suffer from fines plugging and destabilization of the particle ­bridges. In the worst case, an uneven distribution of the flow into the screen can create flow “hot spots” that cause erosive “burn-through” from the high velocities of fluids entering the wellbore. This can lead to sand-control failure and the excessive production of sand through the well.

Horizontal wells provide significantly greater reservoir contact compared with vertical wells and thus can produce more oil and gas with a lower drawdown pressure along the wellbore. This reduces sand production and flux through the completion, which allows standalone screens to control solids across a wider range of sands.

In 2010, Tendeka commercialized the FloMax Ultra premium-mesh sand screen. Developed in response to the industry’s need for an ultrarugged screen that was suited to the rigors of long horizontal, multilateral, or subsea well operations, the screen meets the International Safety Organization (ISO) standard 17824 and is used in some of the world’s harshest environments. More than 700,000 ft of the screens have been installed worldwide with no sand failures or production impairment recorded.

However, the company estimated that up to 85% of wells that need sand control do not experience the mechanical loads that require this type of screen. Thus, Tendeka has recently developed a technologically updated screen to meet the sand-control needs of this large group of wells in a cost-effective manner, which is especially suited to current market conditions.

The new screen meets the ISO qualification standards. It uses the same five layers as the original screen, with reduced material content, and maintains the solid inner and outer jackets.

The inner and outer shroud of the new screen are constructed of 1-mm-thick stainless steel, as opposed to the 1.5‑mm steel used in the original screen. As with the original product, the shrouds are formed when the preperforated and punched stainless steel is shaped and welded in a unique spiral fashion. The inner and outer jackets have opposite spiral orientations to provide significant additional strength.

In the same way as the original screen, construction of the new product uses the swaging method that mechanically fuses all the layers without welding. This provides lateral support, which gives additional strength to the screen.

Retaining the same construction technique across both designs has technical benefits and increases flexibility and consistency at the manufacturing facility, which ensures cost efficiency and finished-product quality.

Qualification testing of the new screens takes place at the company’s manufacturing plant in Shanghai across a range of sizes. By keeping the same construction techniques, many of the mechanical strength ratings are maintained, such as the 100,000-lbm load rating of the raised end rings. Collapse and burst testing are repeated to quantify the effect of the reduced material volume used in the layered construction.

Collapse Pressure. To test the collapse pressure, the 4½-in. sample screen was installed in the test fixture. The system was primed, and the outside of the screen was plugged with a calcium carbonate pill.

Burst Pressure. To test the burst pressure, the sample screen was reversed and reinstalled into the flow test fixture. Fluid from the previously used fluid-loss control pill was used in this test.

After confirming test fixture integrity and the accuracy of the pressure transducers, the pump rate was increased to obtain the maximum burst pressure rating, which was 1,614 psi.

As a result of these tests, the 4½-in. sand-control screen was found to have passed the minimum requirements for ISO 17824 grade V1.

Sand control will challenge operators for as long as wells are drilled. Yet as big a challenge today is cost reduction across the industry. It is widely recognized that innovation must play a key role in securing future hydrocarbon production. The development of this new screen illustrates that innovation is not just about new technology but about finding ways to deliver the same performance with existing technology at a lower cost to the operator.

This paper discusses a probabilistic flux and erosion model and work flow that extend the ability to estimate inflow through sand screens on a foot-by-foot basis along the wellbore using the well's completion details, production rate, and reservoir and bottomhole flowing pressures.

In 2014, a research and development (R&D) project was initiated to increase the life expectancy of Gulf of Mexico (GOM) Miocene and Lower Tertiary water-injection (WI) wells, several of which had suffered a severe loss of injectivity within only a few years of completion.

Digital Transformation at BP is Starting to Add Up to Billions

Analytics, sensors, and robots are changing the way one of the world’s largest oil and gas companies does business. Underpinning all the new technology though is a shift in how BP thinks, and what it means to be a supermajor in the 21st century.