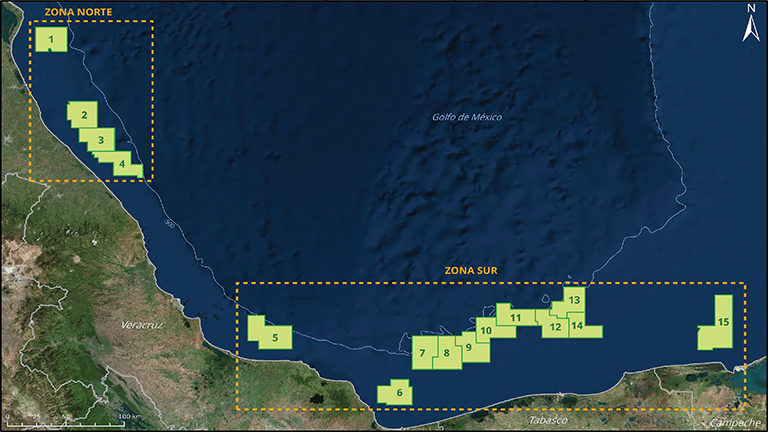 Source: CNH
The blocks designated for the Round 2 auctions in March will feature 10 shallow-water exploration blocks and five exploration and production blocks off the coasts of the Mexican states of Veracruz, Tabasco, and Campeche.

The opening of Mexico’s oil and gas sector was a landmark moment in the industry, but despite the potential upside, the uncertainty and risk surrounding unfamiliar offshore territory in a volatile price market kept many potential investors at bay. Today, more than a year after the first auction of -shallow-water blocks, operators have a better idea of what to expect from Mexican authorities, but there are still questions left to be answered with more public bids on the horizon, an expert said.

In a presentation held by the SPE Gulf Coast Section’s International Study Group, Loren Long discussed Talos Energy’s decision to bid on Mexican shallow-water leases, its -experiences operating in the country, and his outlook on upcoming auctions. Long is the managing director for Talos’ Mexican operations.

Talos, in a consortium with Mexican company Sierra Oil and Gas and British company Premier Oil, won two contracts during the first phase of the initial round of auctions, held on 15 July 2015. The two blocks are located in the shallow waters off the coasts of Mexico’s Tabasco and Veracruz states. Under the terms of its production sharing contract (PSC) with the National Hydrocarbons Commission (CNH), Mexico’s upstream regulator, Talos gained a 45% participation interest in the two blocks. The consortium’s winning bid offered to pay the Mexican government 55.99% operating profit from its first block and 68.99% from the second block, slightly edging out bids from Statoil and Petronas.

Long said there were several elements factoring into Talos’ decision to submit a bid. First, the financial barrier to entry was low: CNH required only USD 143 million in upfront cash guarantees, which Talos was able to satisfy with a performance bond that did not reduce its borrowing capacity under its revolving credit facility. Second, the company figured the uncertain commercial and regulatory framework surrounding the first auction would prove too risky for many national and multinational oil companies to participate, thus limiting the number of major competitors it would have to face.

Third, the blocks CNH offered in Round 1 were geologically analogous to Talos’ other operations in the Gulf of Mexico, primarily in that they are salt-dominated provinces that respond well to seismic data. Long said Mexico offered an opportunity for the company to apply its downhole geophysical and geological knowledge to take advantage of potentially sizable reserves.

“There is an incredible amount of potential downhole,” Long said. “This is part of our thinking and approach to Mexico. We didn’t believe that one operator could find all the oil in that country. Pemex has stayed in an area that they know and like, and they have done quite well in that area, but they haven’t found everything. At least, that’s what we’re hoping.”

Next March, the Mexican government will begin a round of auctions for -shallow-water blocks. But before that, on 5 December, it will hold a public bid on 10 deepwater blocks located in the Perdido Fold Belt and the Salinas Basin. In addition, a separate bid will be held for the selection of a partner for Pemex (Petróleos Mexicanos), the Mexican state-owned petroleum company, to pursue exploration and production (E&P) activities in the Trion field. These auctions are considered to be the final phase of Round 1, while the March auctions are the first phase of Round 2.

Trion is located 200 km offshore the Mexican state of Tamaulipas, near the country’s maritime border with the US. It has approximately 480 million bbl of proved, potential, and possible oil and gas reserves, and the auction marks the first farmout for a Pemex field.

Long said he was initially excited by the Trion announcement because of the previous difficulties in getting Pemex to embrace a farmout. However, the terms of the joint operating agreement have left him slightly discouraged. Pemex will retain a participating interest of up to 45%, and the designated operator will maintain an interest between 30% and 45%. The winning bidder must carry Pemex’s participating interest until joint account investments attributable to the carried interest reach USD 464 million.

While they are not interested in Trion, Long said smaller operators were looking at the farmout as a sign of what to expect from Pemex in future deals.

“We were hoping that [the Trion farmout] would be a template for all of these dozens of fields in the Bay of Campeche that have not been developed. We were hoping that would be a template, but that has not turned out to be the case. It has been discouraging what we are seeing so far. If that’s the template, it’s going to be a real struggle,” Long said.

The bids for the first auction of Round 2 are due by 22 March. This auction will include 10 shallow-water exploration blocks and five E&P blocks off the coasts of Veracruz, Tabasco, and Campeche. Long said there is a possibility that Pemex adds additional deepwater fields to the auction, but that will depend on the results of the Trion farmout.

Long said CNH and Sener, the Mexican energy ministry, have been responsive to industry feedback in setting the terms for bidding, particularly in lowering the financial barriers to entry. Companies looking to bid must meet one of two criteria:

The contracts for Round 2 will be PSCs. The stages of the PSC will include an exploration period of 4 years, an evaluation period of 2 years following a discovery, and a development period of 22 to 32 years, with extensions possible based on the continuity of production. Long said some of the provisions of the PSCs are administratively burdensome. For example, operators are expected to submit an exploration plan within 120 days after signing the contract, a time frame that Long said was unreasonable; a longer deadline would allow operators adequate time to look for potential drilling opportunities in a given block.

Local content requirements for the Round 2 contracts will range between 15% and 35%, depending on the stage of the contract. With no specific labor requirements, Long said operators may be able to reach the local content threshold by purchasing goods like casing and fuel from Mexican companies.

The deepwater contracts will likely be a hybrid of a PSC and a license. Long said these contracts lack the cost recovery provisions commonly found in a PSC, but still require various administrative tasks like reporting their costs to the government. That may be reason enough for some companies to pass on submitting a bid. Discussions between operators and the government on the nature of the contracts are ongoing, however, and deepwater bidding will still draw considerable interest from operators because of the financial potential of the offered blocks.

The deepwater contracts have drawn significant attention from large operators because of the amount of proven reserves. Chevron, ExxonMobil, Total, BP, and Statoil are among the com-panies registered for the auction. However, Long said the shallow-water blocks from Round 2 may be equally advantageous.

“Our theory is that, for areas around there, you’ll see some very exciting opportunities,” he said. “That’s great news for the industry. Now, how quickly can those opportunities be exploited? I don’t know. That’ll remain to be seen, but I think it’ll at least be steady.”