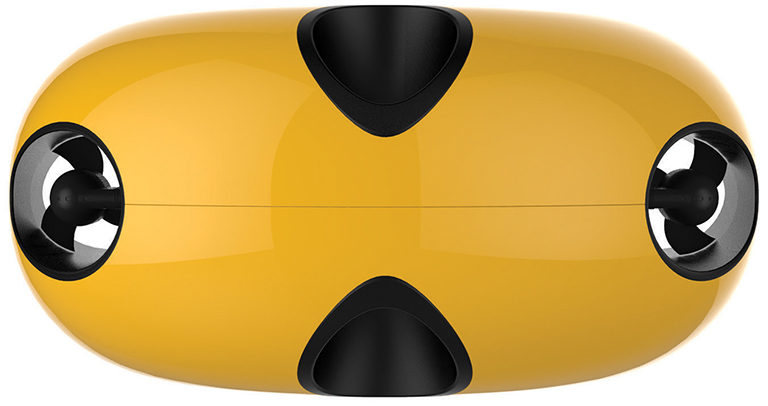 Photo courtesy of Autonomous Robotics.
The seismic receiver node made by Autonomous Robotics is propelled by two thrusters as shown at the right and left sides. A third thruster, which is about the size of a round of cheese, is located in the middle of the node and is used to help lift the node from the bottom after recording seismic data in water depths to 3000 m.

Autonomous Robotics’ first offering is built around a rounded yellow device that looks like a little flying saucer. It is more of a seismic saucer because it is designed by the UK startup to “fly” from a drop-off point in the water to a designated spot on the seabed, where it will record seismic data until it is ordered to return.

The company was one of two firms displaying flying nodes under development at the recent Society of Exploration Geophysicists (SEG) annual meeting in New Orleans. The other was Seabed Geosolutions, which has been working with Saudi Aramco since 2012 to develop a flying node called Spice Rack.

At the SEG meeting, Seabed presented a new version of its self-propelled node at its exhibit booth. An animated video showed its flying nodes being released from a basket lowered into the water by a remotely operated vehicle (ROV). A company representative said it was working with Saudi Aramco on an update for the project.

While most offshore seismic service sectors are in a deep slump, node demand is relatively stable because the technology is most often used for creating high-quality surveys in producing fields, said John Moses, a regional sales director for Seabed.

While ropes can be used to place nodes in water depths to 1000 m, ROVs are needed for accurate placement at greater depths, he said. ROVs are precise, which is required for repeated surveys over time showing field changes. But the cost of using them limits the size and density of the arrays placed, reducing the kinds of work that can be done and the quality of the output.

“For ROV-deployed nodes, as you increase the density, the cost of a survey escalates because of the limited pace of deployment. The cost goes up much less rapidly with flying nodes,” said Arran Holloway, engineering manager for Autonomous Robotics.

The precision of the placement is expected to be as good as an ROV because the navigation system used for the autonomous flying nodes is the ultra-short baseline (USBL) method used for ROVs, with modifications expanding the number of devices it can control.

The nodes from Autonomous Robotics will combine an internal navigation system with course corrections from two moving vessels, the main node vessel and a smaller autonomous surface vessel that stays in contact with the nodes as the main vessel moves out of range.

Autonomous Robotics will use heave-compensated launch and recovery systems to lower cages full of its saucers to below the turbulence of the surf zone. At their maximum depth of 3000 m, the nodes are expected to be able to remain in place 60 days, and likely longer at shallower depths where less power is required in transit, Holloway said.

Autonomous Robotics is currently in the process of building a prototype of its flying node, Grant said. That is the centerpiece of an automated operation. The company’s modular system that can be installed on an offshore work vessel, such as an ROV handler, includes an automated handling system that will move the nodes to and from storage racks to stations where they are cleaned, charged and the data downloaded, and also to the cages used to lower them into the water.

The company’s vision of robotic offshore operations is generally based on building blocks that are now in use. “A lot of the technology is used for slightly different purposes offshore,” Holloway said. That includes the material covering the outside of the saucer, the small thrusters, the navigation system, and software used for placement.

Each of the saucers has three thrusters, two aimed horizontally on the sides propelling it forward, and a third vertical one near one end helps peel it off the bottom when it is time to return and to adjust its glide angle.