Mexico’s Onshore Auction Considered a Success, Deepwater Up Next 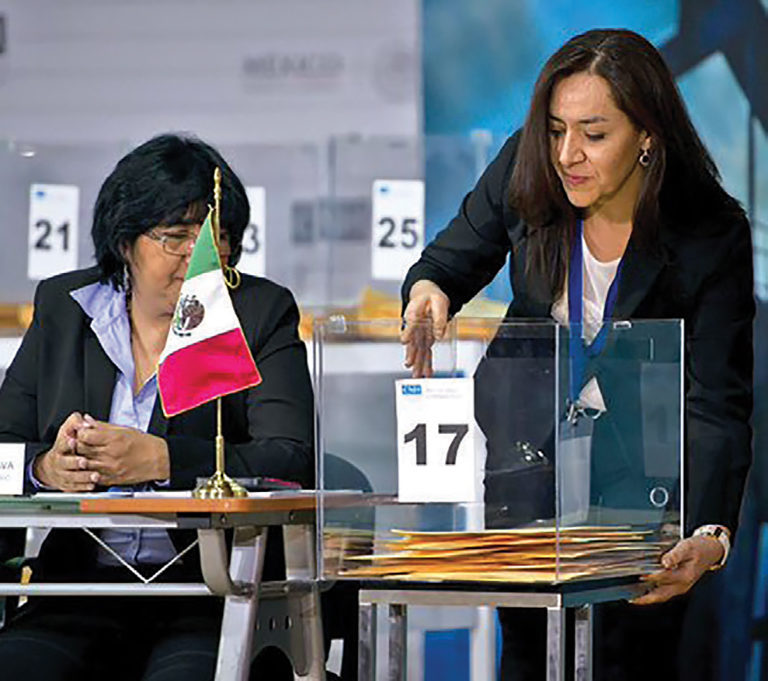 Photo courtesy of Mexico’s National Hydrocarbon Commission.
Mexico’s third auction for onshore mature fields was hailed as a resounding success as all 25 blocks were awarded to mostly Mexican oil and gas companies. There are concerns though that several companies overbid and will find it hard to make their fields economic.

Each of the 25 onshore blocks offered to private companies in Mexico’s December auction were awarded, almost all of which went to Mexican companies. It was the third installment of the country’s historic Round One auction process made possible by a 2013 constitutional reform that for the first time in a generation allows private companies to extract oil and gas in Mexico.

The results of the latest auction exceeded expert predictions as well as those of the Mexican government that prior to the auction, had announced it would consider five awarded blocks to be a success. Only five out of 19 blocks were awarded in the shallow water auctions held earlier in 2015.

In total, 22 of the blocks were awarded to 13 Mexican companies and consortia, with three other blocks going to a Canadian oil company. This result checked one of the biggest boxes for the Mexican government: to firmly establish a domestic and privately owned oil and gas sector.

“This is a triumph for Mexico,” Juan Carlos Zepeda, the president commissioner of Mexico’s National Hydrocarbons Commission, told reporters after the auction. The government estimates that combined production from the newly auctioned areas will reach 36,000 B/D of oil and 240 Mcf/D of gas.

And while no one seems to be disputing the success of the onshore auction, which consisted entirely of mature oil and gas fields, there are concerns that the bidding was so aggressive that the winners left little room for themselves to turn a profit.

The highest bid came from Canamex Dutch, a Mexican-Dutch consortium, which will send 85.7% of its production revenue to the government. The average royalty of all the winning bids was 63% plus income taxes.

At the time of the auction, the Mexican crude oil basket was priced at around USD 30/bbl and production from the awarded areas is expected to come quickly, perhaps in as little as 12 months. Pablo Medina, a Latin America upstream research analyst at Wood Mackenzie in Houston, said that if oil prices do not rise significantly, some companies will find themselves in a tough economic position.

Highlighting the “extremely high” bids, he noted that several of the fields may require capital expenditures of around USD 15/BOE. “Then you need to pay 90% in royalties. So in some cases, you basically end up with USD 3 to cover your USD 15 in costs,” he said.

Almost 100 companies prequalified ahead of the onshore auction in large part due to the government’s loosening of the operating experience requirements. The relatively small size of the blocks also allowed firms with relatively modest financial resources to compete.

In the end, 40 companies submitted bids, the highest number of any of the three auctions held so far. Several of the winning bids came from service companies looking to make the leap to becoming operators after working for decades with Pemex, Mexico’s national oil company.

Francisco Mendez, an attorney with Mayer Brown, has been consulting with several of the companies involved in the auctions and believes the government has made good on the promise that it would be receptive to the industry’s suggestions on how to improve the bidding terms.

“I’ve seen an evolution from the government with regard to the drafting of the contracts,” he said. “Mexico is coming from a 76-year period of monopoly, so change is not that easy. But as everyone saw, there is a lot of attractiveness in this opening” of the country’s energy sector.

Shortly after the onshore auction was completed, the government announced the terms for the highly anticipated deepwater auction that will feature 10 offshore blocks, four in the Perdido area and six in the southeast Salinas Basin. Unlike the onshore and shallow water auctions, the next auction will likely see bids from large international oil companies with extensive deepwater experience.

Data rooms opened in January and will remain available to companies until September. There is no set date for the auction as yet but it is expected to take place no earlier than October.

The Perdido blocks, located near the maritime border with the United States, are considered to be the most promising because of the notable discoveries made in the area. The Salinas blocks have seen far less exploration activity and therefore will present more risk.

Compared with the USD 1 billion in combined investments expected from the 25 onshore blocks, each of the deepwater blocks could demand an investment as high as USD 10 billion. The government is also counting on the deepwater blocks to deliver the vast majority of the new barrels needed to reverse the country’s declining production—now at its lowest level in 25 years.

“The deep water is pretty much the whole reason Mexico made the reforms,” to its energy laws said Gonzalo Monroy, managing director of energy consulting company GMEC in Mexico City. “Pemex did not have the capital, they did not have the experience, and it was very risky for Mexico as a country and as the ultimate owner of Pemex to do it on its own. It could’ve been a potential disaster.”

Monroy added that while it was initially thought that Pemex would seek to participate in the deep water auction as a minority partner with another operator, its credit rating was downgraded in November to an investment level lower than what many companies require of a joint-venture partner.

Mexico’s Onshore Auction Considered a Success, Deepwater Up Next