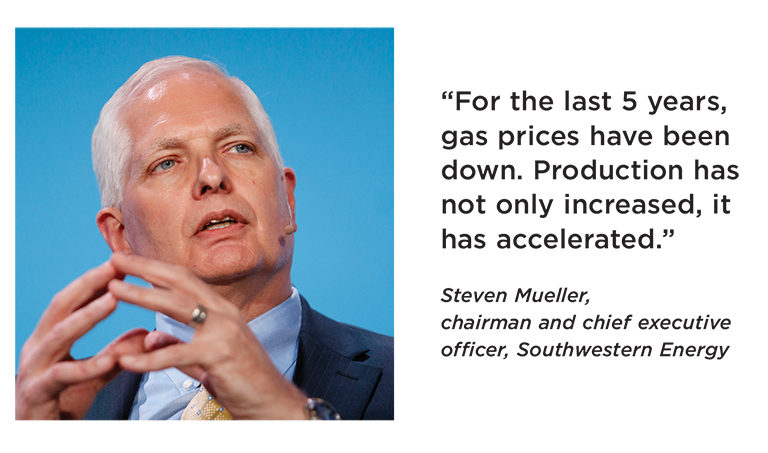 The price declines for oil and natural gas are equally brutal, with roughly a 50% decline for both fuels. But the mood of those working in the gas sector was upbeat at the recent IHS CERAWeek conference compared with those in oil.

The difference can be credited to the differing expectations. On the oil side, USD 100/bbl crude looked like a sure thing going forward until the price slid to around USD 50/bbl. Those on the gas side experienced a move within a low price range they have been living with for years.

That range roughly runs from a high of USD 5 to a low of USD 2 per MMBtu, which is near the recent price of about USD 2.50, said Dave Pursell, managing director, head of securities at Tudor, Pickering, Holt & Co.

“For the last 5 years, gas prices have been down,” said Steven Mueller, chairman and chief executive officer (CEO) of Southwestern Energy. While he said he would like to see prices rise, “we designed our company around low gas prices.”

The group has hammered down the cost of profitably producing gas and maximized output by targeting the best reservoir rock, most of which is in the Marcellus Shale. The same can be said of the other companies working in formations that mostly produce dry gas.

“Production has not only increased, it has accelerated,” Mueller said. He described the combination of ingredients that led to the surge as a “power function.”

The fortunes of oil and gas diverged in fall 2008. Initially, both oil and gas exploration plunged after the financial crisis led to a recession. While oil recovered in late 2009, setting the stage for the booms in the Bakken, Eagle Ford, and Permian formations, gas prices stayed low.

Both oil and gas drilling reached nearly the same peak when measured by the number of drilling rigs working. The top week for gas was 1,606 working rigs in mid-September 2008, while oil reached 1,601 in September 2014, according to the Baker Hughes weekly rig count totals. Since they hit their peaks, the number of rigs drilling for gas has sunk to 225 in late April while oil has fallen to 701.

While the spotlight shifted to the oil boom, a group of efficiency-driven producers focused on driving down the cost of producing dry gas, particularly in the Marcellus in Pennsylvania and adjoining states in the eastern United States.

During that time, production from these formations played a key role in fueling a national surge in gas demand. Consistently low gas prices have led to chemical plant expansions and to the start of US liquefied natural gas (LNG) exports. And growing supplies, matched by equally large demand increases, dampened the wide price swings that have long been an argument against gas use.

“What made the difference is production. It is still a supply story,” said Mary Lashley Barcella,director of North American natural gas at IHS. In the past year, she said “gas producers added 6 Bcf/D in the Lower 48. That is astonishing.”

Gas production needs to continue growing at that pace to meet equally rapid growth in demand, which she predicted would rise by about 25 Bcf/D by 2020. More than half of that would come from the rising use of gas in power plants built to produce more power and replace aging generators, many of them coal-burning. By 2020, gas and coal are both expected to represent one-third of US electric generating capacity.

A new group of customers represents nearly one-quarter of expected demand growth: LNG export terminals. The balance of the rising demand will come from industrial users, exports to Mexico by pipelines, and natural gas burned for oil sands production.

Southwestern’s annual production has jumped from 195 Bcfe in 2007 to 768 Bcfe last year, including acquisitions. Its finding and development costs dropped from USD 2.70 to USD 1.29 per Mcf, according to a recent company presentation.

Southwestern’s average drilling time per well in the Fayetteville Shale has sunk from 17.6 days to 6.8 days, even though the average lateral length shown on the chart more than doubled. The com­pany owns drilling rigs and can drill the wells it needs, many with laterals up to 12,000 ft. The company analyzes a lot of data to find ways to become more efficient, which allowed it to rapidly improve its productivity on acreage acquired in Pennsylvania and West Virginia, Mueller said.

Those added reserves came with two ingredients needed for profitable operations: thick, rich reservoir rock and major markets nearby. “Demand in the US is in the eastern half of the country,” for now, he said. That handicaps those with gas production in distant markets such as western Canada or the Rockies.

A growing number of LNG export terminals concentrated along the US Gulf Coast will create demand for producers in Texas and nearby states. While the first LNG export facility has yet to ship gas, Michael Smith, chairman and CEO of Freeport LNG Development, said projects likely to actually get built could push demand for US gas to 12 Bcf/D.

While 30 company groups are seeking permits to export LNG, he said about seven facilities have a good chance of getting built. Those projects would be enough to make the US one of the world’s leading LNG exporters, and the cost of expanding established facilities is far less than building a new export facility.

Pictures of speakers taken at 2015 CERAWeek. Courtesy of IHS.