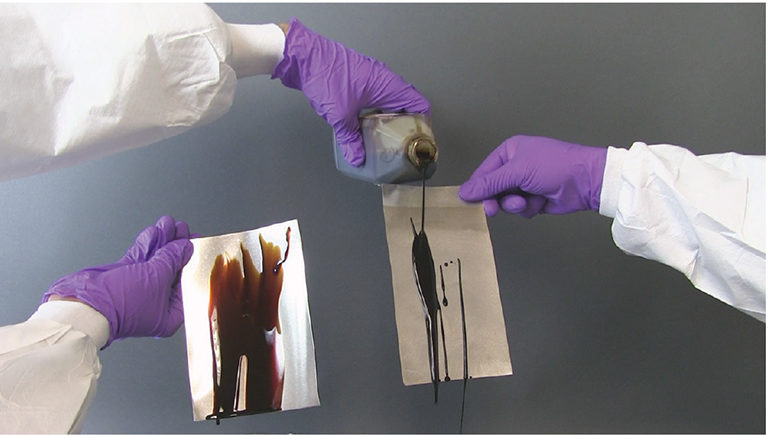 Bitumen is so viscous that the ultraheavy crude oil is often compared to peanut butter. Now a startup company has found a coating that prevents even peanut butter from sticking to the sides of a container, and it hopes to do the same for similarly sticky problems in the oil and gas business.

“Our mission is to solve the world’s stickiest problems,” said David Smith, the inventor and chief executive officer of LiquiGlide, during the new technology showcase held during IHS CERAWeek.

A video of a clear jar filled with crude oil showed how the viscous fluid quickly slid off the treated surface, leaving it virtually clear. The coating could change the industry, he said. It could be used to ensure that pipes flow, instruments do not clog, and metals shed corrosive liquids.

Originally, the researchers were looking for a way to prevent the buildup of methane hydrates that clog pipelines. The company is now looking into problems faced by those in oil transportation and storage and seeking exploration and production opportunities. But it has drawn the most interest from consumer product makers. A deal with the company that makes Elmer’s Glue to keep its sticky product from sticking to bottles was among the early deals for the company now employing 20 people.

Attention-grabbing videos, like the one showing peanut butter rolling around inside a jar like a dry lump of clay, quickly raised the company’s profile. This coating could allow something new: a squeeze bottle for peanut butter that otherwise clogs such containers. When asked about the price, Smith said it was far less than the value added by the spray-on treatment.

There are many potential applications in the oil and gas business. The sticky problems range from asphaltenes fouling processing equipment to sludge building up in pipes.

Applying the method in the oil and gas business will be a test of how adaptable and durable these coatings can be. The method combines textured solid with a liquid to create a “liquid-impregnated surface.” The company likens the solid surface to a microscopic sponge, which holds the liquid in place by strong capillary forces.

When asked if the coating could be modified for applications with a longer lifespan than a bottle of peanut butter, and to stand up to harsher chemical mixes, Smith said it can be custom designed drawing from hundreds of materials to work “with almost every liquid,” and also at high temperatures.