Software That Learns To Predict Trouble in Machines 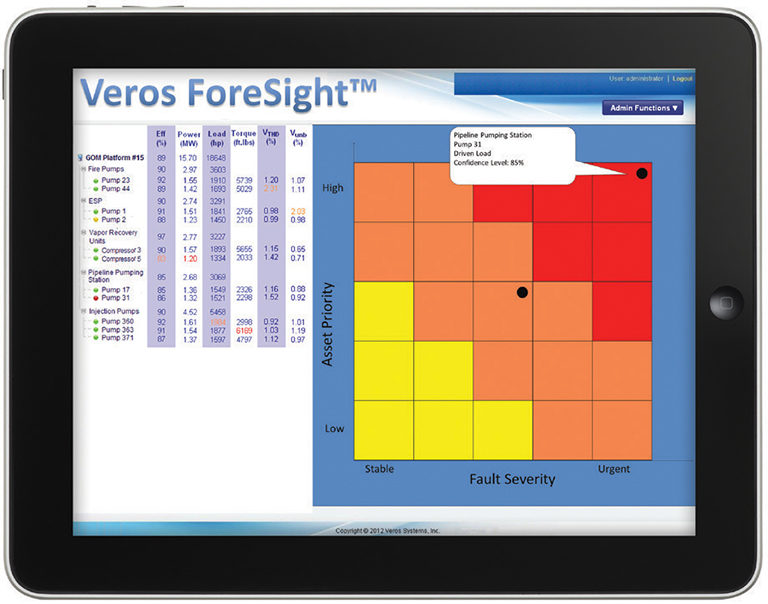 This screen displays the results of the equipment monitoring system, Veros ForeSight. The software analyzes an induction motor’s waveform, which charts variation in its voltage and current over time, to monitor its condition.

Veros Systems is selling simplicity. The electric machine monitoring company promises accurate warnings of problems long before they occur, with a minimum of monitoring equipment to install.

But that minimal presence on site is built from the company’s analysis programs that use machine learning, a branch of artificial intelligence, to learn to identify significant changes in the electrical signature of an induction motor, called a waveform, which can be used to predict potential trouble.

“We connect to the conductors that power motors,” said Jim Dechman, president and chief executive officer at Veros Systems. The system “picks up subtle changes” that can be used to analyze how efficiently it is running, how fast a motor is spinning, and the condition of the motor and equipment it is driving.

During a presentation at an IHS CERAWeek technology forum, he estimated that the market for equipment monitoring may include 50 million motors, pumps, compressors, and fans across many industries. Key early investor support has come from two oil industry giants, Shell and Chevron.

The startup company located in Austin, Texas, is based on the work of Alex Parlos, a professor of mechanical engineering at Texas A&M University. Its history dates back to 2006 when Veros licensed the technology from the university, and its development accelerated in 2013 when it received venture capital funding from two Austin-based funds and Chevron Technology Ventures.

Its challenge is to convince users that it is a lower cost and more reliable option than vibration analysis.

An article written by Parlos points out that tracking and analyzing small and slowly changing variations in electric waveforms—the chart of voltage and current over time—is a reliable indicator of performance. This software can learn to tell if variations in an engine are due to outside factors, such as differences in the plant’s power supply, or an indication of ball bearing wear. It is attached to a motor relay, which is quicker and less costly than installing vibration sensors inside a device.

Waveform data is fed into a small monitor on site for analysis and is then sent to a user’s computer network. The results are displayed on a dashboard offering real-time performance, and the software offers alerts of expected problems, Dechman said.

A customer testimonial on the company’s website said the system identified a serious problem in a motor driving a compressor early enough to allow for repairs during a scheduled shutdown. It also accurately advised against heeding warnings from vibration analysis on other machines, which were caused by factors that could be addressed by adjusting their output.

Software That Learns To Predict Trouble in Machines