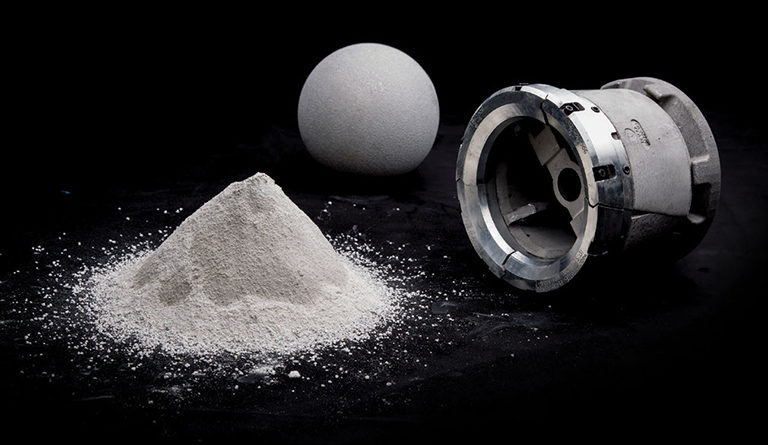 Photo courtesy of Schlumberger.
Fig. 1—The seat assembly and ball used in the new plug-and-perf system dissolve completely and predictably in temperatures of as low as 75°F (24°C), leaving no diameter restrictions to impede future operations.

Of all the technologies that have propelled the unconventional boom in the United States over the past 15 years, plug and perf (P&P) remains the No. 1 method for stimulating multistage wells, enabling operators to achieve significant economic gains in previously inaccessible reservoirs.

Unconventional wells have become longer, with laterals extending as far as 10,000 ft and beyond. When combined with tighter spacing between stages, this growing lateral length has dramatically increased stage counts. In North American land activity, stages per lateral have nearly doubled in most basins since 2008, thanks in part to increased efficiencies in P&P operations.

P&P relies on the use of a wireline or electric line to convey perforating guns and plugs to isolate sections of a reservoir for hydraulic fracturing. After the well is stimulated, the plugs are milled out with some type of mechanical intervention, such as the use of coiled tubing (CT).

Over the years, P&P has been improved with the development of composite plugs, as opposed to permanent-style plugs, that can be milled out in a continuous operation, pump-down operations to replace mechanical conveyance, and toe-initiator valves, which eliminate the need to mechanically convey perforations for the initial stage of the P&P operation.

Despite these advances, mechanical intervention remains costly and risky, and in some instances may damage the recently placed fractures. In cases of low reservoir pressure or extended-reach laterals, milling can be especially problematic. Returns do not easily reach the surface, and friction and helical buckling effects can often result in CT lockup, preventing the CT from reaching the required depth to remove plugs in the toe section of the well. Debris left behind from milled-out plugs in the wellbore can result in the CT becoming stuck, thus driving up costs and further delaying production.

These limitations signaled the need for the industry to move a step beyond conventional P&P technology. A new, dissolvable P&P system eliminates the need for mechanical intervention to remove plugs, enabling an unlimited number of stages to be stimulated. Launched in February, the dissolvable P&P completions system has been successfully implemented in many of the major unconventional plays in North America.

The Infinity dissolvable plug-and-perf system operates in the same fashion as a conventional P&P, but uses fully dissolving seats, instead of plugs, for isolation (Fig. 1 above). The system was designed for use in cemented, uncemented, vertical, deviated, and horizontal wells in shale, sandstone, carbonate, and other rock types. The seat assemblies serve the purpose of plugs and dissolve in a controlled manner after the stimulation has been performed, leaving a full-bore inner diameter.

With no restrictions left in the wellbore, the well can immediately be put on production with better cleanup and increased production potential. The process improves extended-reach stimulation and the ability to conduct pre- and post-stimulation operations throughout the life of the well.

The new system follows the same work flow and uses the same setting tool and gun string as conventional P&P. The design features a downhole receptacle, installed as part of the casing string, which provides an anchoring point for the dissolvable seat. The same-size receptacle is used repeatedly, facilitating an unlimited number of stages.

From the surface, the system pumps a dynamic dissolvable seat that is small enough to fit through all the receptacles (Fig. 2). Once it reaches the desired location for setting, the seat changes size when actuated with the same setting tool used for a conventional plug.

Upon actuation, the seat shifts to form a top ring with an outer diameter (OD) larger than the upset of the receptacle. Installed during wireline operations, the seat provides the landing point for the dissolvable ball, which is dropped after the guns have been pulled out of the hole. The dissolvable ball and seat and receptacle form a proppant-tolerant, metal-on-metal seal, which allows the casing to support the differential pressures generated during stimulation.

In designing the dissolvable P&P system, Schlumberger worked from its Elemental dissolvable alloy technology, which it uses to design dissolvable fracturing balls. For the seats, the company developed a next-generation composition, which was needed to address the added complexities of seats related to temperature, stress distribution, thermal stability, and wellbore exposure time.

The industry has a good understanding of the wellbore environment and length of well exposure time for fracturing balls. If a ball exceeds its operational life, another ball can easily be dropped. However, there is not a definite length of time from the point at which the seat is installed to the point at which it is used. Thus, the device may be exposed longer than anticipated. Because the wellbore temperature can increase during this time, a worst-case temperature scenario was used in designing the alloy.

The result was a stronger, longer-lasting, and higher-temperature competent material that provides thermal stability and the capability to withstand the higher temperatures and stresses distributed across the seats. Users gain more flexibility with a wider operational window, improved efficiency, reduced risk, and a greater likelihood of placing successful fractures, without compromising operational integrity.

The dissolvable P&P system has been deployed in most of the major unconventional plays in North America. During the early stages of the system validation, Schlumberger collaborated with several operators in the Eagle Ford Shale in Texas. Because this play presents high-pressure/high-temperature challenges at bottomhole conditions, it was well suited for testing the limits of the technology.

Complex well geometries and extended-reach laterals make milling difficult, particularly in the final 500 ft to 1,000 ft of the lateral. Final plugs sometimes are left in place, obstructing the wellbore and choking off production.

Field trials, which began in early 2014, were conducted in a tiered manner. A limited number of stages initially were completed in the toe of the well, followed by the expansion to the full wellbores. For the fully dissolvable P&P operation, receptacles were installed as part of the casing string, cemented into place, and spaced at predetermined intervals based on the stimulation design.

For each stage, a seat was deployed on a wireline tool string during the perforating run in the travel position, which has a small enough OD to pass through the upset of the receptacles. The tool string with the dissolvable seat was pumped down to the target zone and stopped above the receptacle so the seat could be actuated with the standard plug-setting tool. The seat then shifted from the travel position to the set position to form the top ring and expand the OD of the assembly.

The expanded seat’s OD prevented the tool string from continuing to pass through the receptacle, forcing the seat to stop on the upset and match the geometry of the receptacle to create the metal-on-metal seal. After normal perforation operations, the tool string was pulled out of the hole.

At the start of each stimulation stage, a dissolvable ball was dropped from the surface to land in the seat and complete the isolation from the previous zone. After stimulation, the balls and seats dissolved, enabling immediate production. In the Eagle Ford, a total of 162 well stages in 10 wells were stimulated using the dissolvable P&P method, with no milling or mechanical intervention required for seat removal.

The dissolvable seat system offers expanded opportunities for P&P completions, replacing the conventional plug isolation. The new technology also can operate in conjunction with other stimulation methods in a single well, integrating with openhole ball drop systems to stimulate additional stages in the heel, or with conventional P&P to stimulate stages in the toe and heel.

Optimizing recovery and reducing cost and risk remain key objectives in the unconventional market. The new dissolvable P&P technology expands the capabilities of multistage stimulation, thus eliminating the need for mechanical intervention and optimizing production in cemented and uncemented wellbores. Wells can now be drilled and completed with longer laterals with fewer risks and improved economics.