US Oil Goes From Critical to Stable Condition 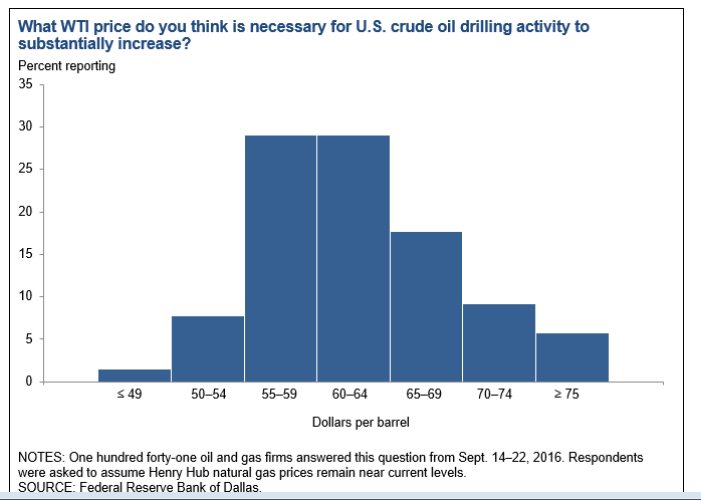 The outlook for the US onshore oil business is looking better, which is not to say it is looking up.

Recent surveys by the Federal Reserve banks of Kansas City and Dallas of operators and service companies in states with key oil-producing plays indicated the industry had stabilized after a long period in critical condition.

For the first time in 2 years, some of the indicators are in the positive zone and others are nearly so, said Chad Wilkerson, vice president, economist, and Oklahoma City Branch executive at the Federal Reserve Bank of Kansas City, who described the mood of those responding as “less pessimism.”

Rig counts have been rising and in August, the number of Texas energy jobs rose for the first time since the crash in late 2014, said Karr Ingham, petroleum economist for the Texas Alliance of Energy, who tracks the health of the state’s oil business with an index based on a wide range of statistics such as prices, drilling activity, and employment.

“We are near the bottom,” he said. Based on the numbers he has been gathering for his upcoming report, the third quarter index is likely to rise, ending a long run of declines. “It will not be like going from the very bottom of barrel to fabulous. It will be a slow process as prices recover.”

With oil prices around USD 50 and gas around USD 3/Mcf, profits remain elusive for many. “On average, though, firms need energy prices to be slightly higher than recent prices in order to be profitable,” Wilkerson said.

While oil and gas prices have risen from their lows, the Fed surveys covering many key oil-producing US plays found that the average break-even costs are USD 53/bbl for oil and USD 3.45 per million Btu of natural gas.

If the price of oil rises to USD 55/bbl, Ingham said “a good section of our members will be going back to work (drilling). They are just treading water now. Every USD 5/bbl incremental increase in crude oil opens up some other projects.”

But with a range of break-even prices in the Kansas City Fed survey from USD 40/bbl to USD 75/bbl, it is clear many companies will be remaining on the sidelines.

On the plus side, energy firms reported “activity increased moderately,” and the outlook for the future “remained positive overall,” according to the Kanas City survey, which contacts companies based in oil-producing states such as Oklahoma, Colorado, Kansas, and New Mexico.

But Wilkerson, whose office is in Oklahoma City, said their gains are focused on the few growing plays, particularly the Permian in Texas and New Mexico, and the SCOOP and STACK in northwest Oklahoma.

While the two surveys reported improvement, both showed a significant minority reporting declines in activity, and the Kansas City report showed the number hiring was significantly less that those adding jobs.

One thing aiding operators is that the price of services is rising from deeply discounted levels. Seen from the services side, that is a painful fact of life.

Anonymous comments noted in the surveys included: “Banks are putting pressure on us and business partners, and rates on lines of credit are up. Regulatory issues continue to increase especially in light of earthquakes in Oklahoma. Demand for consulting services is collapsing. Solvency of oil and gas operator partners is now a stressor. Bank lines that used to be available are being withdrawn. Banks are raising fees on everything. We will probably have to start bringing our own pens to the bank.”

But an early earnings report from Halliburton offered some hopeful news.

The services company announced a USD 6-million profit for its third quarter. That is tiny for Halliburton but after the losses it has been reporting, Halliburton’s CEO David Lesar said, “I never thought I’d be so satisfied with barely making a profit.”

Another plus was that the company’s workforce remained at 50,000 workers, ending a string of declines that cut its payroll from 85,000.

Both reports were based on survey work in September before OPEC had agreed to reduce its production. This will only take effect if the member nations can agree on individual quotas in November.

Also, the US Energy Information Administration recently predicted that gas prices are likely to remain around USD 3/Mcf this winter. Specifically, gas demand is expected to be 10% higher than last year when heating fuel use was reduced by a winter that was 15% warmer than it had been over the past 10 years due to El Nino, which has passed.

Ingham offered his upbeat report as he drove to Houston to speak at the Distressed Energy Summit to investors and lawyers focused on companies whose debt-laden balance sheets mean their futures remain in doubt.

“Despite the recent spike in oil prices, all indications suggest more producer bankruptcy filings will occur during 2016,” according to Haynes & Boone, a law firm that has been tracking oil and gas bankruptcy filings.

“We are not done washing out” weaker players, Ingham said. “At some point those will level off as well. It does not make sense to me [that] we are done.”

Quotes in the survey by the Federal Reserve banks of Kansas City and Dallas from people working at oil and services companies based in those oil-producing states.

“We expect a significant increase in 2017 capital spending as long as we have access to debt and equity markets at rates justifying accretive returns.”

“We may increase capital spending to drill if oil prices rise above $55 for a sustained period.”

“I think completions spending will increase the most in 2017 followed by drilling spending.”

“My business is Texas-based and will benefit from increasing pipeline capacity to Mexico for natural gas.”

“Not every shale play is the same in cost vs. profit. One cannot be general in what price drives drilling and production. It also matters who owns sweet spots. Price sensitivity is different in both regions and shale itself.”

“The supply of natural gas will increase in the Permian Basin of West Texas before other areas.”

US Oil Goes From Critical to Stable Condition