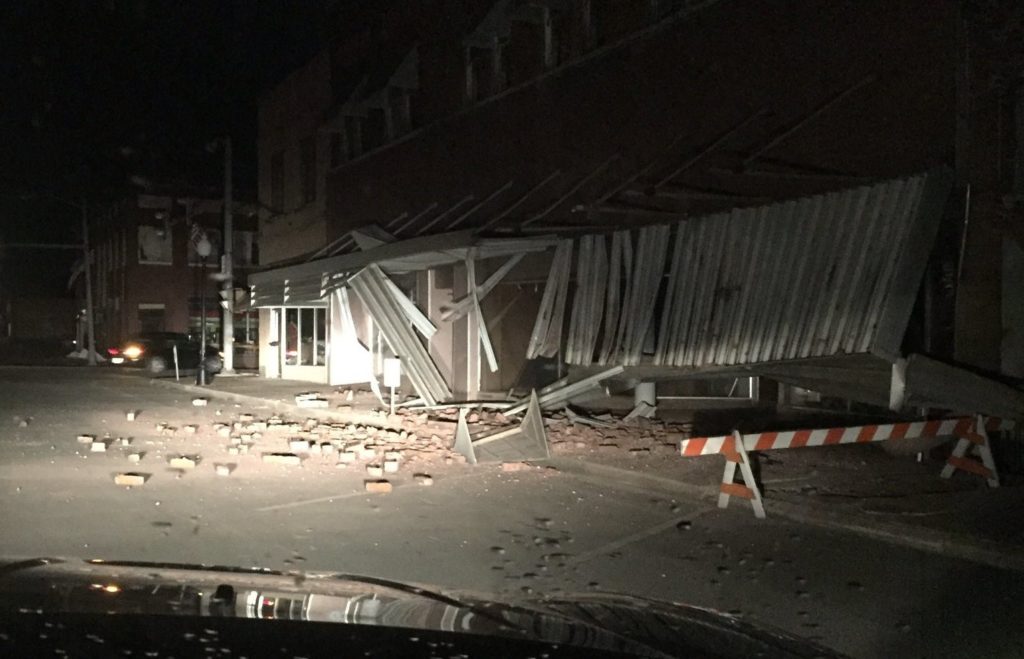 Source: Kevin Stump
One of the first photos taken after the Cushing earthquake shows damaged buildings and sidewalks covered with bricks.

The Oklahoma Corporation Commission (OCC) has announced it will shut-in and curtail injections of disposal wells within a 700-sq mile area in response to the Cushing earthquake—which is now understood to be two earthquakes with magnitudes of 5.0 and 4.6. It is not known how many wells will be affected as part of this latest regulatory action, but the OCC said that more plans are being drafted to include a larger area. Full details are expected later.

On Sunday evening a 5.0-magnitude earthquake rattled residents of Cushing, Oklahoma—home to the largest oil storage facility in the world. While early reports say that the oil infrastructure was unaffected, city officials said at least 40 buildings in the Cushing area suffered structural damage.

State officials and seismology experts have linked the growing number of earthquakes in Oklahoma to the injection of oilfield produced water into a fault-connected formation called the Arbuckle, the landing point for nearly all the state’s disposal wells.

Sunday’s earthquake was the fourth-largest in state history and the third to measure a magnitude of 5.0 or greater this year. Photos shared on social media in the hours after the earthquake showed crumbled bricks on sidewalks, broken ceiling tiles, and the floors of grocery stores filled with fallen merchandise.

At a Monday morning press conference city officials reported that there were minor injuries related to the earthquake, which occurred at about 7:45 p.m., and said it would take another couple of days to complete a full damage assessment and reopen parts of downtown to the public.

The Oklahoma Corporation Commission (OCC), the state’s oil and gas regulatory body, issued a statement saying it is drafting a new action plan that may affect disposal well operations in the area where the quake hit.

The rate of earthquakes in Oklahoma has increased sharply since 2010, coinciding with the ramp-up of unconventional developments in the state. To address the problem, termed induced seismicity, regulators have ordered shut-ins or reduced injection volumes at about 700 of the state’s disposal wells.