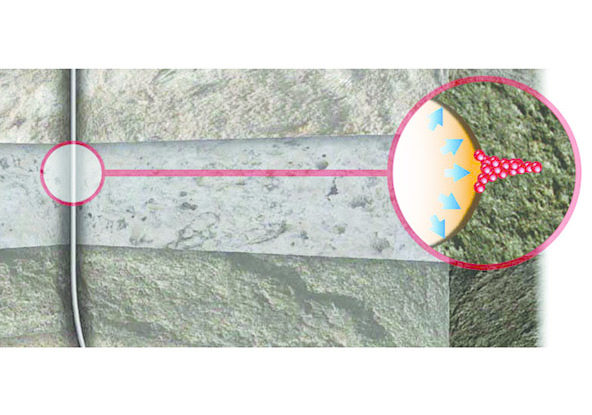 Image courtesy of nFluids
An illustration shows how nanoparticles plug fractures in a wellbore, adding integrity and reducing mud losses during drilling.

The challenge for nanotechnology-based drilling fluids is that in order to gain acceptance, they cannot simply match the industry’s conventional chemistries—they must outperform them.

Calgary-based nFluids believes it is among the first to answer that call. The 4-year-old firm is now in the early stages of commercializing its nanoparticle additive that it says is compatible with all types of drilling fluids.

Based on results from nine pilot wells and an independent study by the University of Missouri, the company reports that its nano-additive has achieved up to a 60% increase in wellbore strength, a 90% reduction in fluid losses, and a 50% reduction in friction during drilling—with the latter translating to a faster rate of penetration.

Jeffrey Forsyth, the chief executive officer of nFluids, said that since the company formed, it reduced its original manufacturing cost by about half while driving big improvements in the technology’s effectiveness.

He explained that when iron and carbon constituents are broken down into nano form “all their properties change and it’s almost as if you’re looking at a completely different material—but more importantly, most of those properties are greatly enhanced.”

Those properties are what enable the nanoparticles to form a thin, yet durable, filter cake around the inside of the wellbore. This action takes place within minutes of introducing the nanoparticles into the drilling fluid base.

As the particles move into the small pores and fractures of the exposed rock, the effective permeability is reduced, making it less likely that drilling fluids will bleed into the formation and weaken the wellbore.

With less formation damage, it also becomes less likely that wellbore walls will collapse in on a drillstring, a common problem known as stuck pipe. And when the proper balance of fluids and well pressure is not effectively managed, even worse issues can arise such as a blowout.

For producers tapping into the most unforgiving formations (think of shale or deepwater), the value proposition being offered is pretty simple: spend a little more cash on advanced fluid technologies and a lot less time remediating the issues mentioned above.

“If you look at drilling fluids—if everything goes according to plan—it is probably the smallest cost in many ways,” insisted Forsyth. “But if you lose a couple of days on a job where you’re drilling 3500 m, that’s going to amount to a lot more money than your fluid losses.”

He added that the company can re­design the shape, size, and function of its nanoparticles to address a number of different drilling conditions. This flexibility has enabled the company to concentrate its additive solution so that it represents only half-a-percent of the total weight of a well’s entire drilling fluid system.

In a promising sign for the company’s commercial prospects, it has signed a joint-development agreement with one of the majors (name not yet disclosed).

It is also exploring a broad spectrum of other applications for its technology, including conformance control in enhanced oil recovery; water cut reduction in steam-assisted gravity drainage wells; perforation diversion for refracturing shale wells; and as a magnetic reservoir tracer.