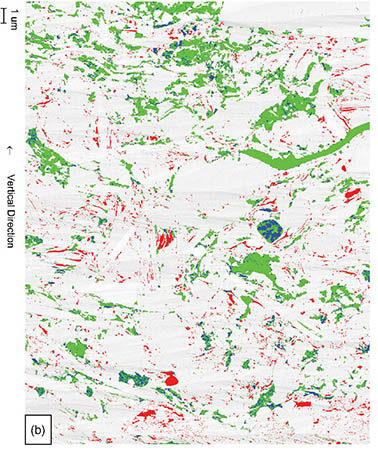 Source: Ingrain
Fig 1b -- Fig 1a (below) is shown with color shading for OM (green), PAOM (blue), and mineral-associated porosity (red).

A new technique that analyzes scanning electron microscope (SEM) images of formation samples has been used to measure porosity and total organic carbon (TOC) in the Wolfcamp Shale of the Delaware Basin in west Texas. The technique’s application has led to methods and findings that can be used to

In particular, the technique was able to identify where the porosity was hosted and quantify the porosity in organic matter (OM), which cannot be specifically determined by standard laboratory methods.

The technique was successfully demonstrated in a project undertaken by Anadarko and Ingrain that compared SEM-image porosity and OM content with standard helium porosity and TOC data from pyrolysis.

The case study focuses on stratigraphy that is dominated by microporosity, with permeability ranging from nano­darcies to millidarcies, and is related to the deposition of argillaceous, siliceous-dominated turbiditic sequences (diagenetic overprinting). The stratigraphy includes carbonaceous-dominated basal debris flows in a variable slope to basin setting through time.

All SEM subsamples were polished with an argon-ion-beam milling system. Images of the polished areas, approximately 1 mm by 0.5 mm, were captured using a SEM secondary electron (SE2) detector at a resolution of 250 nanometers (nm) per pixel.

Next, a series of images at a resolution of 10 nm per pixel were acquired simultaneously, using SE2 and back-­scatter electron detectors. Both types of images are required for accurate quantitative analysis. These SEM images were acquired perpendicular to bedding, along the vertical axis. Representative samples were also imaged at 5.0 nm and 2.5 nm resolution. Most of the additional porosity detected by the higher resolution images was found to be associated with OM.

The multiple resolution images were used to compute final OM and porosity values. The porosity was further analyzed and separated into PAOM and mineral-associated porosity (intergranular plus intragranular). Fig. 1a (below) shows an example of a 10-nm-­resolution SE2 image from one sample. Fig. 1b (above) shows the same image with colors indicating OM, PAOM, and mineral-
associated porosity.

LECO1 is a traditional pyrolysis-based lab method that measures TOC. LECO TOC in weight% was multiplied by 2 for comparison to SEM OM content in volume%. The exact ratio depends on OM composition, maturity, and bulk rock density and could be lower or higher than 2 for any sample. In general, there was good agreement between the LECO TOC and the SEM-image-based OM content. Similar results have been reported for Eagle Ford shale samples by Capsan and ­Sanchez-Ramirez (URTEC 2461642).

The porosity observed from SEM-image analysis was lower than dry-­helium porosity for most samples, and the difference was greater for samples with higher clay content. Also observed was a direct correlation between BV water (from Dean-Stark extraction on preserved samples) and the clay volume (from XRF and FTIR). A crossplot of these two values has a near-zero intercept, which suggests that most of the water is associated with the clay. Preserved samples with no clay had essentially zero water content. The data also shows that half or more of the dry-­helium pore volume is clay-­associated water in the preserved samples.

A conclusion can be drawn from the correlation between BV water and clay content that clay-bound-water (CBW) porosity can be determined directly from the dry-clay volume. For these samples, the relationship is approximately “CBW porosity is equal to total clay volume times 0.2.” The CBW porosity was computed for each sample, using this relationship, and was added to the SEM-image porosity. The results seen in Fig. 2a showed similar values to dry-­helium porosity.

Clay minerals in-situ are always associated with a considerable quantity of water. This water takes two main forms, adsorbed and internal. The internal water is very tightly bound between the clay platelets and is not removed by the standard lab cleaning and drying procedures, such as Dean-Stark extraction. The water adsorbed on the outer surfaces of the clay particles is removed during Dean-Stark extraction and is counted as part of the total pore space, along with any capillary-bound or
free water.

Different clay species hold different amounts of adsorbed water. For example, smectite will bind 50 times more water on its surface per gram of clay than kaolinite (SPE 131350). Chitale (AAPG Search and Discovery 40487) published a summary of the apparent “clay porosity” for four clay types, kaolinite, chlorite, illite, and smectite. These values provide a means to compute the CBW porosity in shales, assuming that the volume fractions of the four clays are known.

The CBW cannot be resolved from SEM images and is counted as part of the clay mineral volume, not as part of the porosity. Therefore, the SEM porosity can be considered as porosity available for free water or hydrocarbons.

Clay in these samples is about 25% smectite and 75% illite with small amounts of chlorite and kaolinite, as determined by FTIR. The weighted average CBW porosity is equal to about 0.21 times total clay volume, using ­Chitale’s published clay porosity for different clay species. This agrees quite well with the value of 0.20 from the slope of BV water vs. total clay. The computed CBW porosity, when added to porosity from SEM imaging, gives an approximate total porosity that compares favorably with helium (GRI) total porosity
(Fig. 2a).

For the Wolfcamp formation samples  studied, the following are observed:

1An acronym for Laboratory Equipment Corporation, manufacturer of the carbon analysis instrument used in this TOC measurement application.