Extending the Life and Performance of Drillpipe With Wear Band Technology 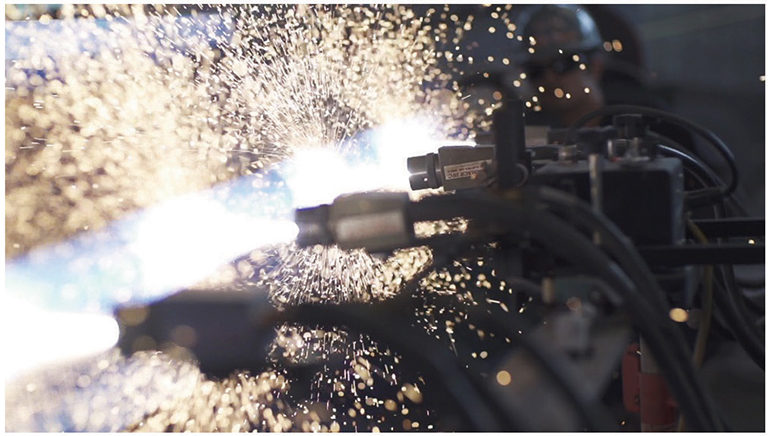 Drillpipe doesn’t last forever, but a ­Houston-area startup company says it has developed a way to make it last significantly longer.

WhiteHorse Technology calls its service product wear bands, which is an adaptation of a technology invented in the 1930s called hardbanding. Hardbanding is a welding process that is still used today to protect steel tool joints from excessive wear and tear by coating them with a sacrificial metal material.

Wear bands are different in that instead of being welded, they are applied with a lower-temperature thermal spray system. This makes it possible to add a protective layer of metallic coating to the midsection of a drilling pipe without negatively impacting its metallurgic properties—an application breakthrough that WhiteHorse claims no other firm does.

The company reports that its wear-banded pipe experiences lower downhole friction and also allows for a greater weight-on-bit to be used, which results in faster drilling speeds. Wear bands are also set apart from hardbanding in that the latter technology typically is used to apply a relatively thin layer of protective coating.

“But what we discovered is that you can continue to make passes, maybe 100 or 200, and build things into different shapes, forms, and thicknesses,” said Karma Slusarchuk, the founder and chief executive officer of WhiteHorse.

She explained that by building ­cylinder-shaped bands around the middle of a pipe, its service life can be extended to at least 2 years, and up to 5 years in less-abrasive formations.

By comparison, Slusarchuk said it’s common for drillpipe to survive less than a year in horizontal drilling where gravity pulls the middle of each pipe section down a few inches, enough for it to make contact with the formation or the casing. As the pipe turns or is tripped out, that sagging portion will eventually erode to the point where it cannot be used again.

Most operators rent their pipe, but when a section is rejected due to wear, they are typically charged the full price for a replacement. And while drillpipe costs can fluctuate, WhiteHorse has priced its wear band treatment to be below what most operators pay for replacements.

The tool of the trade for the company is a thermal spray system that simultaneously creates four wear bands around the pipe using a high-strength iron material called HH-1. The process begins by feeding two HH-1 wires into an arc-welder which melts the material on contact.

As the pipe rotates on a lay, compressed-air guns send atomized specs of the molten metal flying onto it. In a few minutes, the pipe is cool to the touch and ready to be hauled out to the rig.

Each wear band’s peak is about an eighth of an inch high, a foot wide, and separated by another foot—providing up to 8 ft of protection and friction reduction.

WhiteHorse says its HH-1-coated pipe has been run in and out of more than 500,000 ft of wellbore in North Dakota’s Bakken Shale. The company’s primary client there is XTO, ExxonMobil’s shale subsidiary.

Slusarchuk said the shale driller has leveraged the coated pipe’s lubricity ­property to reduce its lateral section drilling time from 6 days to 4 days. And since the HH-1 material reduces torque and drag, the drillers have been able to turn the bit much faster, accelerating from an average of 170 rev/min to 240 rev/min. “And the only change they made was in adding the bands,” Slusarchuk said.

How WhiteHorse acquired the patent rights to this technology also explains how XTO became its first client. A company called WearSox is the original developer of this thermal spray technology which it used to protect drillpipe for ExxonMobil’s record-breaking extended reach drilling program in Sakhalin Island, Russia.

Slusarchuk was a drilling engineer with ExxonMobil on that project and eventually became a consultant with WearSox. Realizing there was an opportunity to redeploy the technology for shale producers, Slusarchuk founded WhiteHorse and was granted exclusive rights to the technology by WearSox, which opted to turn its focus to wear-banding centralizers used in offshore drilling operations.

Because of her prior relationship with XTO’s parent company and its familiarity with the technology, the shale producer was quick to adopt wear-banded pipe for its drilling operations in North Dakota.

“They took a risk with us and are now squeezing every dollar out of it,” Slusarchuk said. She added that her clients will start saving on transportation costs as WhiteHorse completes the move of its fabrication operations from Houston to North Dakota.

WhiteHorse also is researching how it can use its technology to build drilling motor stabilizers which would give drillers greater control in thin pay zones. If the company can produce a stabilizer that survives 50 hours of drilling, it expects to enter into a partnership with one of the major ser-
vice companies.

Extending the Life and Performance of Drillpipe With Wear Band Technology