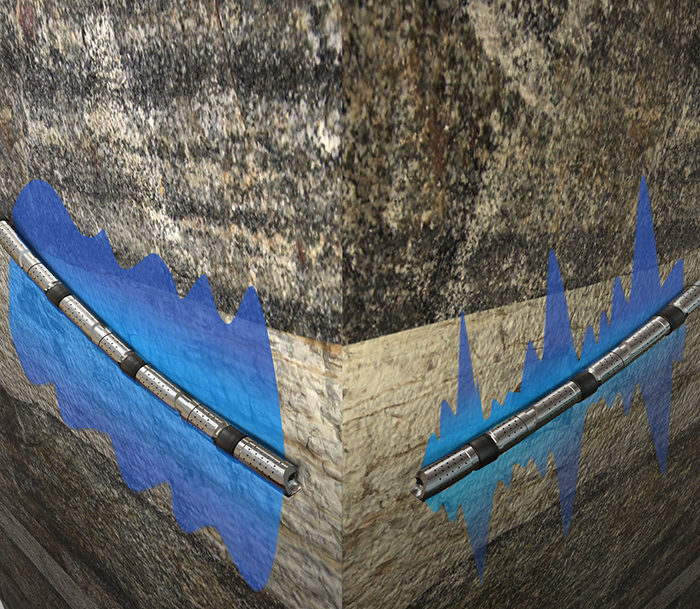 Image courtesy of Statoil Technology Invest
An illustration shows injected fluid distribution along the well. Improved distribution (seen in the left wellbore) can be achieved by applying poroelastic diagnostics to surface pressure data.

Devon Energy used the method, called Image Frac, to map fluid distribution and proppant placement during well stimulations. The technology works by applying poroelastic diagnostics to the fluid pressure response of an adjacent well, as the stimulation treatment changes the stress levels in the reservoir rock. The technology was developed by innovation incubator Statoil Technology Invest (STI).

“We used this technology, along with several other fracture diagnostic tools, to evaluate a recent STACK spacing pilot,” said Kyle Haustveit, Devon completions engineer. (STACK is an acronym for the Sooner Trend, Anadarko [Basin], Canadian [County], and Kingfisher [County] plays.)

A series of studies evaluated the impact of proppant and diverter designs, variable cluster spacing, and alternative fluid systems on well completions. Recommendations based on the use of the technology led to a new completion design that reduced the number of stages and lowered completion costs.

With the baseline proppant design, it was discovered that the introduction of proppant early in the treatment in a particular way often led to a degraded fluid conformance, with fluid blocked from entering smaller fractures and an accelerated growth rate occurring in larger fractures.

The Image Frac mapping results showed that a change in the proppant introduction method was able to mitigate this effect (Fig. 1). Using the alternative method, the incidence of the negative impact of proppant introduction on fluid distribution along the stage was reduced from approximately 70% to 20%.

The studies also examined the relative performance of different diverters in their effects on fluid conformance along the well and the impact of diverter dropping techniques and volumes.

The diverter in Fig. 2a strongly improved conformance about 15% of the time but had little benefit in more than 50% of the cases. The highly effective diverter shown in Fig. 2b, when it worked well, improved fluid distribution by achieving an average 35% reduction in the length of the longest fracture.

The use of multiple drops as shown in Fig. 2C was found to improve fluid distribution in approximately 70% of the stages, compared with improvement in less than half of the stages when single diverter drops were made.

Fig. 2D shows the potential for the new diverter material to improve conformance, with almost two out of every three diverter drops having proved effective.
Further studies led to the discovery of a new fluid design that has shown promising results for improving fluid distribution.

The method requires pressure response from a limited number of fractures and is not suitable for a conventional reservoir or an unconventional one with extensive natural openings to flowing fluid, such as the Barnett Shale.

“The technology is designed to be seamless with standard completion operations,” said Matthew Dawson, STI investment manager. Other than plugs that need to be set at certain times during fracturing, the method only requires the placement of a pressure gauge on the observation wellhead. In some cases, there are multiple observation wells and additional gauges are used.

No sensors or downhole measurement tools are required, thus avoiding the risks of breakage, loss, or potential interference with operations, and no on-site personnel or permits are needed. Jobs can be quickly designed, compared with alternative methods for which planning and design can take weeks or months, Dawson said.