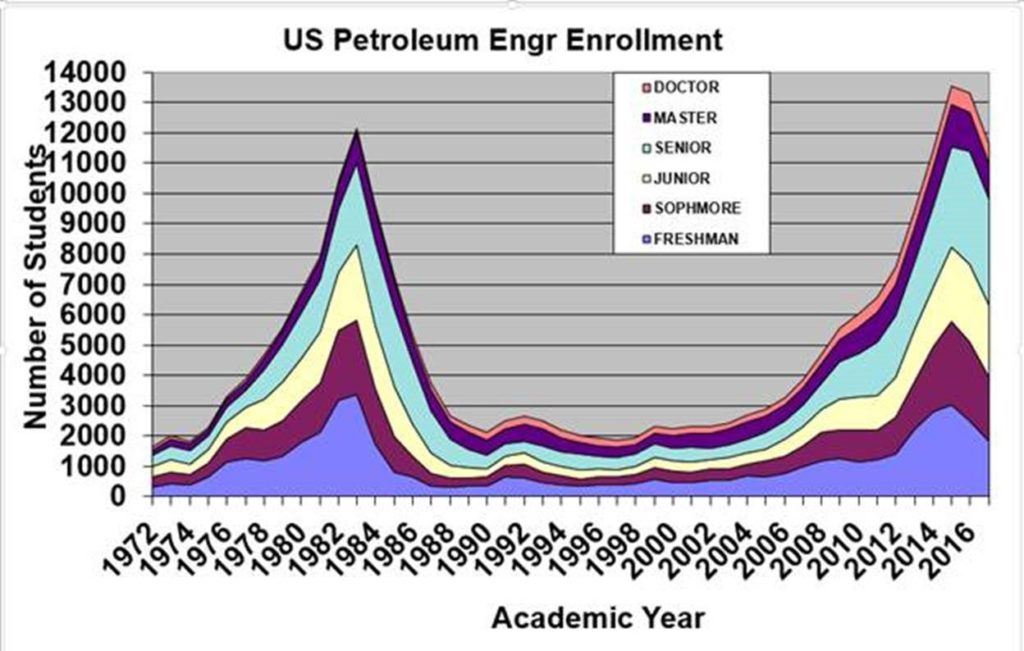 Enrollment in US petroleum engineering programs have peaked and are on the downslide, matching the short-lived surge in the 1980s, when a generation of engineers were graduated.

Lloyd Heinze, the petroleum engineering professor at Texas Tech University who compiles this annual survey, “does not think this will be as bad.”

The big question is: Will that long trough be repeated after a decade where the industry stepped up its recruiting to hire college graduates in time for the many workers nearing retirement?

That will depend on the level of industry hiring in coming years, which he said is impossible to reliably predict because hiring plans are subject to sudden changes.

But for those choosing majors, it is a question that is a big concern.

“Students and parents are astute about watching the job market. They are much more selective than they were in the 1980s,” Heinze said.

As of this school year, the total enrollment in US universities is down but is still high by historical standards.

A long-term chart of enrollment shows how enrollment boomed prior to the 1980s bust, with a surge of engineers entering the job market in a short period.

For those graduating during the 2017 academic year (2016–2017) and afterward, the job market looks nothing like the one they saw when they chose their major. 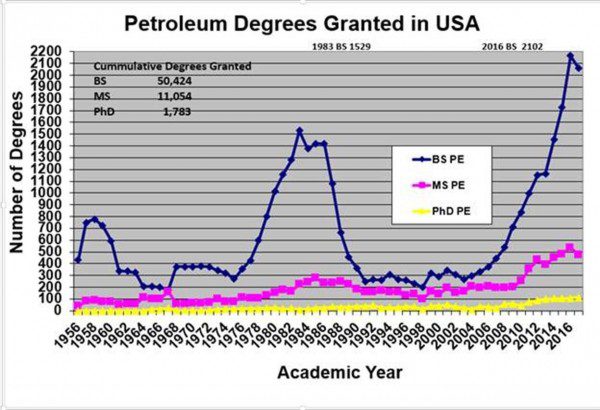 The oil price slump has resulted in deep layoffs, with more than 300,000 job cuts industry-wide.

Less obvious has been the surge in the number of petroleum engineering graduates seeking work, which far exceeds the peak in the 1980s.

Oil markets can react far more quickly than engineering students. The inflation-adjusted peak oil price in the 1980s occurred more than a year before the enrollment peak, and that is happening again. 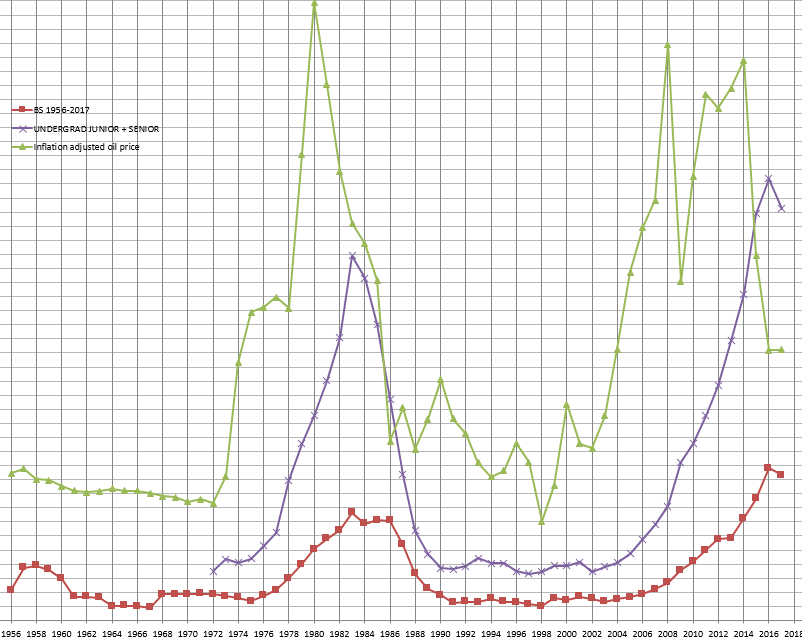 The volatility of oil prices means companies in this business are prone to make quick changes in hiring plans. But students who have made big, long-term commitments to majoring in petroleum engineering “are not going to switch gears,” Heinze said.

Evidence of that fact is the number of juniors in the class of 2018 with about 3,500 students, or about 40% of the record total graduating the previous 5 years.

One positive in the chart shows that the price of oil, based on the current value of the dollar, peaked at a higher level in the 1980s boom than it did recently, and back then it fell further. Heinze said that may mean the current downtrend may not be as severe.

Over the past decade, the surge in graduates was readily absorbed by oil companies faced with the prospect of the mass retirements of an aging workforce.

This chart of SPE professional membership shows that in 2005, the largest group of engineers in exploration and production was age 50 or older.

A survey done in late 2015 shows a flip in the demographics with the largest groups of members in their 20s and 30s.

This years’ big layoffs have added to the challenges faced by job seekers by putting many experienced workers on the market.

Also, it is likely to have further reduced the number of engineers in their late 50s in the workforce, reducing the need to hire future graduates.