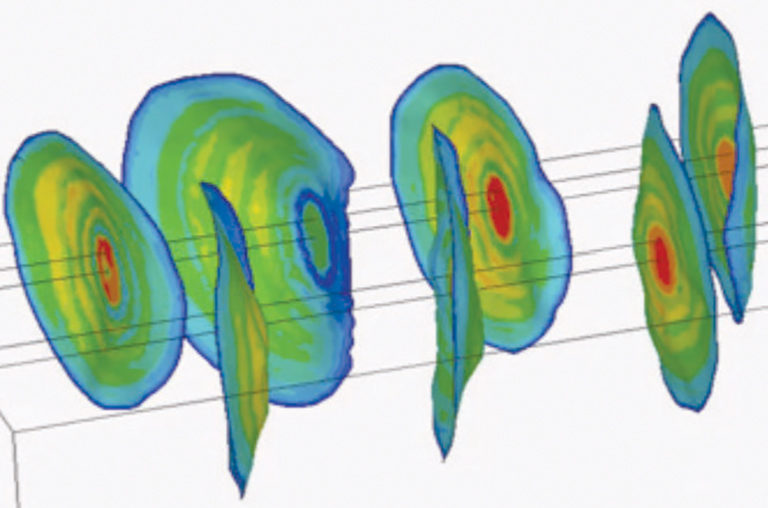 Source: Rockfield
Modeling hydraulic fracture designs in naturally fractured formations offers shale operators a way not only to judge their completion strategy, but it may also help them avoid generating fractures that intersect with another well.

One of the oldest names in geomechanical modeling has learned some new tricks, and like so many recent advances in the oil and gas industry, it has everything to do with the North American shale revolution.

Founded nearly 30 years ago, UK-based Rockfield was among the first to develop a hydraulic fracture model for conventional reservoirs, and remained one of the few names in specializing in this field for much of that time.

But the market opportunity presented by the complex geomechanics involved with fracturing tight rock and shale reservoirs has spurred more competition and forced legacy modeling companies such as Rockfield to revamp their existing codes and develop new software products.

The company spent 2 years working on this front to create a set of modules—basically, pieces of its flagship modeling software named Elfen—that can be imbedded into the commercial software platforms that many operators and service companies routinely use.

In addition to hydraulic fracturing simulation, the modules were also designed to predict near-wellbore effects that apply to drilling, completions, and production. Another set of new modules focuses on static and dynamic reservoir modeling as well as forward modeling of a reservoir’s geologic evolution.

Although these latest modeling products are the beneficiaries of modern computing power and programming prowess—essentially making them much smarter than previous generations—they are not being touted as one-to-one replicators of the subsurface.

Adam Bere, the chief technology officer and head of the consultancy department at Rockfield, explained that today’s unconventional modeling technology should instead be viewed as a tool for reducing uncertainty. He also said that modeling can serve as a guide for engineers regarding what they should look for in the subsurface data as they plan how to stimulate a shale well.

“We can’t put our hand on our hearts and say that everything we’re modeling here is exactly what you would see 4,000 m under the ground. I don’t think it would be wise to ever say that,” he said. “However, what we can do with modeling is run through many different scenarios and then you can understand the sensitivities to different parameters.”

Bere added that through this iterative process, engineers can get a better grasp of how the reservoir’s stress state and even the bedding of very thin layers of rock may impact their key concerns such as fracture length, stimulated volume, and proppant placement.

To bring it closer to many of the industry’s largest shale producers, the company opened its Houston office in 2015. Bere said the firm is optimistic about gaining market share in this sector based on the understanding that the margin for error in shale fields is lower today than ever before.

The shale business appears generally to be embracing this type of software technology, partly evidenced by the rising number of SPE papers covering the subject from an operator’s point of view. Though they are certainly aware that this area of modeling still needs time to mature, our lower-for-longer era is driving them to find out if it can offer lasting improvements to their rate of return.

Among the opportunities that Rockfield sees for its modeling products is helping operators avoid the cross-well communication problem known as frac hits. This issue is common, and happens when a new well is being hydraulically fractured and the pressure from that operation sends fluids, and even proppant, through extensive natural fracture networks that are connected to older producing wells.

In the worst cases, a frac hit will harm the performance of adjacent wells, or it can knock them offline completely. It is an important issue to resolve considering that many shale producers are in the infill drilling mode and their wells are getting closer and closer together. Over the past few years, these com­panies have crafted a mix of mitigation techniques, but the problem persists.

An accepted practice to block frac hits involves loading up potentially affected producing wells with fluids, usually water. Some believe doing this will impede approaching fractures, but there are some who shy away from this method, believing instead that it may actually do more harm than good. Others will switch up their tactics depending on the field.

Uno Mutlu, chief operating officer of Rockfield’s Americas business, emphasized that when choosing which strategy to use, many operators overlook the importance of the primary forces at play in a shale reservoir, including physics, flow and pressure regimes, geomechanics, or local stress states.

“In certain cases, fluid loading could divert approaching fractures away from a champion producer and prove to be an effective shield to minimize undesired interference between wells. In other cases, the same approach might reverse this effect and attract infill-well fractures toward an existing producer well,” he explained.

To estimate if fluid loading will work or not, one of the things that the com­pany’s models take into account is whether a field is naturally fractured. In each scenario, the flow regimes and rock deformation mechanisms that dictate a formation’s response to fracturing are different and need to be simulated to remove some of the guesswork.These parameters also change over time as a reservoir becomes depleted of hydrocarbons and reservoir pressure, meaning what worked once in a particular area may fail the next time it is tried. “So to sum it up,” Mutlu said, “you won’t be able to use rules of thumb when it comes to frac hit protection.”