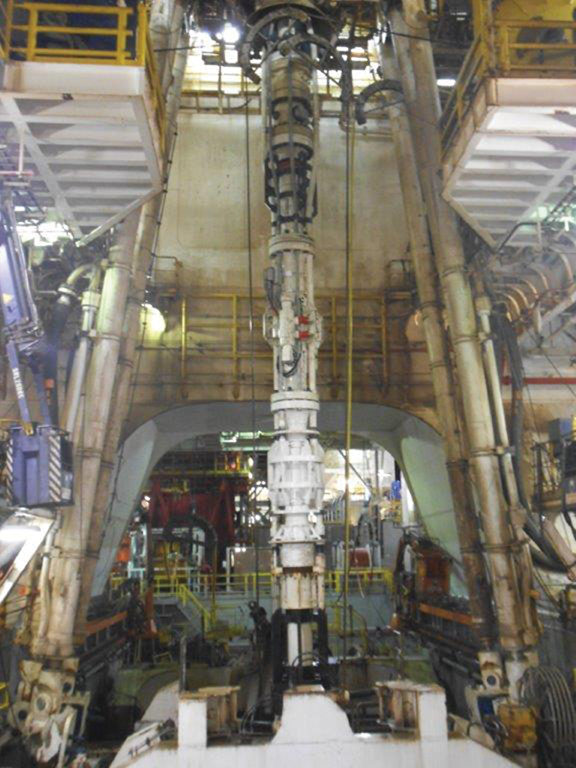 Source: Weatherford.
Fig. 1—A riser joint is shown, which is integrated into the automated drilling system of a deepwater rig for the application of managed-pressure drilling techniques.

The unique properties of deepwater formations pose significant ­challenges to the capabilities of conventional drilling rigs. By retrofitting rigs with automated drilling systems, including ­managed-pressure drilling (MPD) equipment, operators and contractors in global deepwater basins can optimize efficiency and economics while maintaining the level of safety that the industry and regulatory community have mandated for this high-stakes arena.

MPD, an adaptive drilling process that actively controls annular pressure throughout the wellbore, is increasingly being integrated into the risers of existing deepwater drilling vessels (Fig. 1 above). It is the cornerstone of an automated well-­control strategy that augments and enhances standard well-control protocols.

The technique provides distinct drillability, efficiency, and process safety benefits in deepwater environments. It addresses the higher level of priority that the industry has placed on process safety, which largely involves the ability to accurately and actively monitor and control operations while drilling.

Long used in land and shallow-water drilling, MPD-ready rigs are proving their value in deepwater operations by delivering a reliable level of automation and process control when the risk of a well-control incident is highest. Fluctuations in wellbore pressure often create drilling hazards that result in lost circulation, kicks, and other problems that can significantly increase rig time and cost, or lead to catastrophic well-control incidents.

The ability to continuously monitor various wellbore parameters—particularly those related to downhole pressure—while drilling and making connections also enhances personnel preparedness by serving as an extra set of eyes to supplement those of less-­experienced drillers.

While expanding the drilling envelope and monitoring wellbore pressure profiles, an MPD system that provides automated advanced flow detection, including early kick detection, also reduces the risks of human intervention by mitigating the possibility of gas in the riser.

Characterized by presenting a high level of uncertainty and technical difficulty, deepwater formations that have settled in place often feature drilling conditions in which the window between the pore pressure and fracture gradient is very narrow. The scenario makes these formations highly sensitive to, and less able to support, pressure.

Often, the only way to navigate the drilling windows in a deepwater well is to set multiple casing strings. The deeper the well, the more strings required, with each pipe adding time, cost, and risk.

Unlike a conventional drilling rig system, an MPD system installed on a rig can easily accommodate the downhole uncertainties that operators typically face in deepwater reservoirs. This capability is especially important in pre-salt plays where the degree of uncertainty is additionally problematic because the salt bodies can shield features from accurate detection by seismic surveillance.

Using MPD, the driller can change pressure on demand quickly and efficiently, instead of having to alter the mud weight. By detecting and reacting to problems before they become difficult or impossible to control, MPD can actively influence the safety and efficiency of rig operations.

By enhancing drillability, efficiency, and process safety, MPD is considered the most readily available and proactive way to meet heightened standards for verifying deepwater drilling parameters and achieving safe drilling margins between the well’s pressure profile and the anticipated pore pressures.

Operators have required MPD-ready rigs to help drill exploratory, appraisal, and development wells in pre-salt areas. Real-time monitoring and early kick detection provide the additional assurance that deviations from normal drilling operations can be managed as efficiently as possible.

Rigs retrofitted with MPD systems deliver multiple cost, environmental, and safety benefits by enabling a number of applications, the most common of which are CBHP drilling and PMCD. The techniques reduce drilling hazards such as differential sticking, kicks, and losses, and significantly lower the risk of well-control incidents.

In narrow pressure windows and wellbore ballooning situations, CBHP is maintained by applying surface backpressure (SBP) in a closed-loop process. Operators can navigate narrow mud-weight windows, maintaining a precise balance between the pore-pressure and fracture-pressure gradients even when pumping stops.

The closed-loop system enables quick adjustments to bottomhole pressure and also diverts mud returns away from the rig floor, which enhances wellsite safety.

In cases of severe circulation losses, which are commonly encountered in carbonate formations, the PMCD variant of MPD overcomes the limitations of conventional drilling techniques. This is crucial in deep carbonates that are characterized by extensive fractures or karsts, which are large holes that can cause major circulation problems.

The PMCD method facilitates pumping light mud into the annulus to create a mud cap, which enables the use of a less-costly drilling fluid such as sea­water while drilling through the loss zones. This “sacrificial” fluid and the cuttings collected are accepted into the lost-circulation zone.

When drilling in sour reservoirs, PMCD enables operators to manipulate annular pumping rate and SBP in a manner that forces the toxic sour gas downhole, where it can be pumped into the formation with the drilling fluid and cuttings and away from wellsite personnel.

Both MPD variants are made possible by two primary components that leave a small surface footprint. The first is the rotating control device (RCD), which closes in the well to enable the application of SBP and provides rotation to facilitate drilling with pressure in the annulus.

As part of the mud-return system, the RCD routes the fluids through an automated drilling choke manifold that is equipped with sensors to extract important fluid data. This is a marked difference from conventional drilling systems, in which the fluid return is open to the atmosphere.

The second key component for CBHP drilling and PMCD is the MPD manifold. An automated manifold, including drilling chokes and a high-­resolution mass flowmeter, enables operators to make faster, better drilling decisions that are based on surface and wellbore data ­rather than predictions.

The flowmeter captures critical data from annular fluid returns, such as mass flow, density, and temperature, in real time. Data are routed to an intelligent control unit (ICU), which precisely detects fluid influxes or losses in gallons rather than barrels to capture events too small for detection with a conventional drilling system.

This enhanced sensitivity improves reaction to kicks, losses, and the risk of gas in the riser at depth. The flowmeter is installed with drilling chokes that are engineered to open and close to regulate SBP, which is essential for actively managing the annular pressure profile.

A second, redundant choke reduces the potential for encountering nonproductive time (NPT). If an influx is detected, the automatic choke can be immediately closed to control the well, which reinforces mass balance quickly and safely. In the event of a fluid loss, the choke can relieve surface pressure to mitigate the losses.

The ICU is capable of distinguishing actual kicks/losses from other, less critical drilling events. When operating in automated mode, the ICU also controls the drilling chokes to regulate backpressure as needed. By detecting and confirming downhole pressure events, the technique accurately and efficiently manages minute fluid influxes and losses, which results in a safer and more efficient operation throughout the drilling process.

In addition to its obvious usefulness in cases involving a predetermined risk of kicks or fluid loss, or uncertainty related to pore-pressure, fracture, or hole-­stability gradients, this capability is a valuable safeguard against other, not fully anticipated pressure events.

The adoption of the MPD integration on floating rigs is gaining widespread acceptance, with many rigs operating in deepwater fields worldwide now retro­fitted with the necessary equipment. While regulations do not explicitly require MPD capabilities on deepwater rigs, the benefits of MPD are recognized as one of the key ways to meet the necessary drilling parameters, protocols, and& classifications.

Globally, MPD-equipped deep­water rigs have exhibited their power to en­hance drillability by enabling rank wildcat wells to reach and evaluate target formations and helping development wells to access the reservoir. In terms of efficiency, deepwater MPD operations have incurred minimal, if any, NPT related to well-control incidents and have enabled quick transitions from one MPD mode to another.

From a process safety standpoint, MPD operations, including advanced flow detection, have consistently helped to identify, detect, and control influxes before they become unmanageable, and have to date experienced no events in which large volumes of gas have reached the riser undetected.