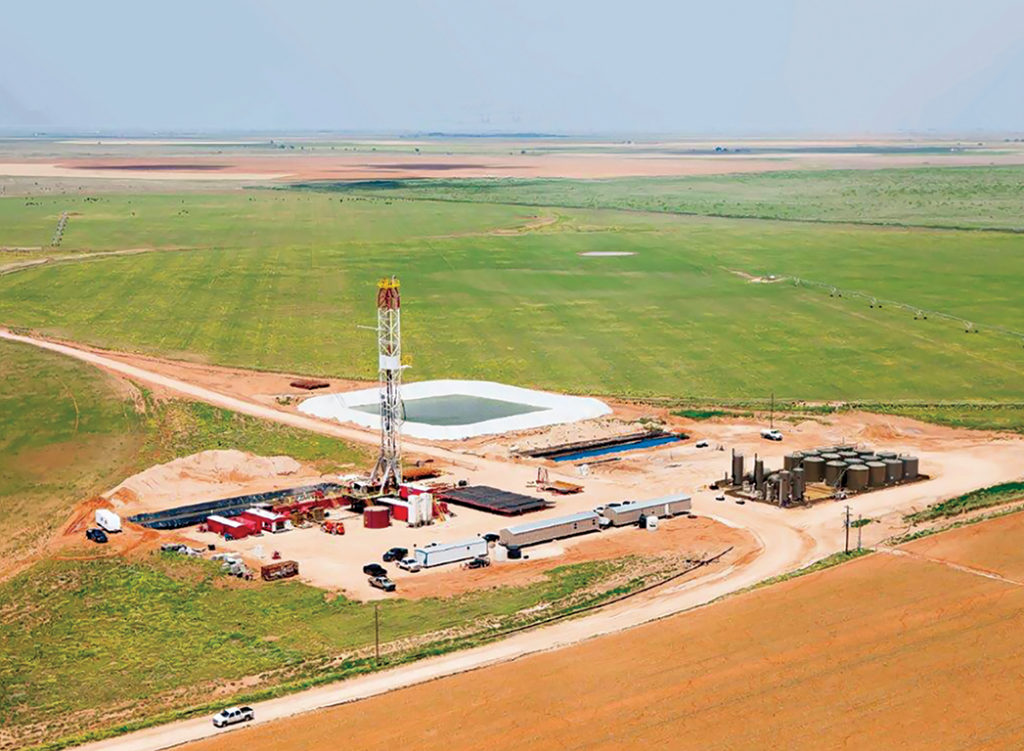 Source: Manzano LLC.
This well pad for Manzano Energy serves two leases with about 8 wells. Most of the 16 tanks store produced water from wells producing about 15% oil, before it is sent via a company pipeline to its disposal well.

Sometimes a new oil play is discovered by an explorer doing “the right thing for the wrong reason.”

That is how Ken Barbe, one of the founders and managers Manzano LLC, describes the decision to drill one of the first successful wells into a Permian play which is unconventional, but not in the way he and his partner had expected.

The independent company drilled a horizontal well thinking “we were dealing with tight rock that produced limited amounts from vertical wells,” he said. But when they fractured their first horizontal well they found more permeable rock producing a lot of water.

That led to conversations with two other companies pioneering this zone that said it was to be expected.

“We had some conversation with Forge Energy and Walsh Petroleum and they encouraged us to be patient and that we would start seeing an oil cut once we got our pump intake pressure down,” Barbe said. “They were exactly right and we had to change our opinion on how and why the reservoir would work economically.”

The three companies are among a group of independents in West Texas that have shown it is possible to consistently drill and complete wells producing hundreds of barrels a day of good-quality oil from relatively shallow, horizontal wells that require little fracturing.

The method requires a leap of faith and some high-capacity injection wells because those wells initially produce only large quantities of water and continue to do so long enough to make a strong case for plugging and abandoning the hole.

Decline-curve analysis is one of the more widely used forms of data analysis that evaluates well behavior and forecasts production and reserves. This paper presents technologies that apply DCA methods to wells in an unbiased, systematic, intelligent, and automated fashion.

Based on the early results from mass shut-ins of shale wells, it did not harm long-term production and it paid a short-term dividend with more oil flowing in the days after restarting.

Have Oil Sands Producers Found an On-Off Switch for Their Wells?

When oil demand vaporized, oil sands producers cut 300,000 B/D of production from wells using steam injection to produce bitumen. It is a huge test of something they have long been reluctant to do—turn down in-situ production when prices plunge.