Rebound To Test If Cost Cuts Will Last 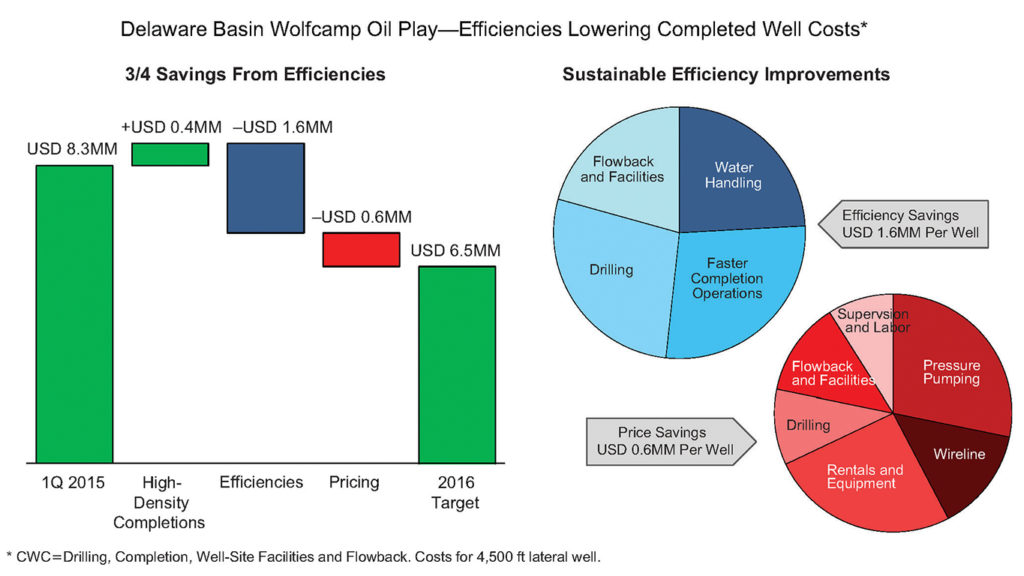 Source: EOG Resources.
An EOG presentation breaks down how the company has reduced the cost of Permian Basin production, with more than 70% of its activities not affected by service company price increases.

One sign that things are getting better for US onshore exploration is the revival of talk about looming shortages and bottlenecks.

By mid-year, sand to prop open fractures and trucks to pump those jobs are expected to be in short supply. Oilfield hands are already a scarce commodity. Those are solvable problems, but at a price some companies may find uncomfortably high.

Surveys by branches of the US Federal Reserve Bank done in the fourth quarter of 2016 said that the break-even oil price for companies in Texas and surrounding states varies widely, and is generally greater than USD 50/bbl. The survey by the bank’s Dallas branch found that nearly 60% of the 141 companies surveyed said that it would take a price from USD 55/bbl to USD 65/bbl to “substantially increase” US crude oil drilling. And that was before service costs began rising.

The smallest bar on the chart was for companies that can make money drilling when oil is USD 49/bbl or less. Some analysts publish estimates of average oil prices needed to profitably produce oil, but those averages mask a wide range of break-even levels. There are also differences among analysts on what percentage of the cost reductions made in the industry since 2014 will vaporize in the face of the double-digit service price increases that are expected this year in the unconventional services sector.

“We hear every ratio possible,” said Jackson Sandeen, a senior research analyst for Wood Mackenzie, who said the savings are 40% from more efficient operations and 60% due to service sector price concessions, which will shrink. Bain & Company clients put it at 60% of sustainable efficiencies and 40% from price concessions, said Jorge Leis, a Bain partner that leads its Americas Oil & Gas Practice.

Rystad Energy said the average price needed to profitably produce oil in the US nonconventional sector has dropped by 50% since the downturn hit in late 2014, but a lot of that is based on supplier discounts. “Lower unit prices of service companies are a major reason for the drop,” said Jon Duesund, senior project manager for Rystad, during a recent briefing in Houston.

Rebound To Test If Cost Cuts Will Last