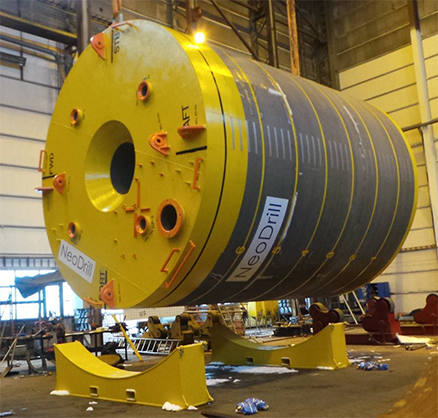 When the industry discusses subsea wells, the tophole construction gets scant attention. The Norwegian company NeoDrill believes it deserves more. Using its conductor anchor node (CAN), the company has enabled operators to drill wells in offshore Europe with structurally more stable foundations, greater efficiency, and at substantially less cost than comparable traditional wells. Now NeoDrill is trying to spread the technology to the Gulf of Mexico, Australia, and other major drilling areas.

The CAN is a large steel cylinder that is open at the bottom with an open guide pipe in its center. The device sets into the seabed, working similarly to a suction anchor, and carries and secures a well’s tophole casing (conductor). The CAN is set in place by a dynamically positioned installation vessel before the arrival of a drilling rig. Setting takes 12 to 24 hours and saves 2 to 4 days of expensive rig time, thus eliminating rig-related conductor handling and logistics and expediting well production startup.

The CAN supports driven, jetted, or drilled/cemented conductors. A CAN model is available with an integrated conductor. (Hence, this version is called a CAN-ductor). The conductor for this model is installed and cemented in place in the fabrication yard before the CAN is shipped to the wellsite. Such prerig-installed conductors enable the well to be spudded with a smaller bottomhole assembly (BHA), e.g., a 26-in. instead of a 36- or 42-in. BHA.

As the CAN rests on the seabed, a remotely operated vehicle pumps water out of the device, and the CAN is pushed into the soil by its own weight (approximately 80 metric tons), in addition to the force created by the attained differential pressure across the CAN’s lid.

A reverse process of pumping water into the CAN allows it to be retrieved and reused after an exploration well has been drilled. Only the surface casing needs to be cut for removal operations to proceed, and this is likewise true for the plugging and abandonment of CAN-equipped development wells.

Commercially, the CAN is rented for exploration wells and sold to the operator for development wells, as it becomes part of the permanent installation.

The use of the CAN-ductor substantially reduces the environmental footprint of tophole construction by minimizing the volume of well cuttings created and eliminating conductor cementing operations.

A CAN will have verified load capacities, by observation of the differential pressure, and when in place will allow the well loads to be spread across the height and 18-ft diameter of the CAN. Thus, the device provides a stable, reliable foundation with ample capacity to also support the rig’s blowout preventer (BOP) and riser-induced side loads. The CAN increases the well’s capacity to support regular axial and lateral loads as well as accidental loads—such as from a rig drift-off /drive-off—and withstand bending and fatigue.

With the CAN’s additional stability, the bending moment of the conductor pipe below seabed is reduced to negligible proportions. Costly countermeasures such as increasing the pipe size and thickness will in most cases be unnecessary, thus avoiding potential operational difficulties.

So far, the CAN has been used in 15 North Sea wells, including exploration and development wells, in water depths ranging from 410 ft to 4,700 ft.

Notably, the use of the CAN-ductor enabled OMV to set a world record on a Norwegian Barents Sea well for the shallowest lateral drilled from a floating rig. Lateral kickoff began at a depth of 33 ft below seabed, with the horizontal section extending 4,600 ft only 750 ft beneath the seabed. The effort earned the 2016 Engineering Achievement of the Year award from SPE in Norway.

“We chose the CAN technology because we needed to start building angle as quickly as possible, given the shallow reservoir,” said Dag H. Breivik, drilling manager at OMV (Norge). “The technology has superior technical benefits that enabled us to maintain wellhead integrity when the conductor setting depth was so shallow.”

The CAN-ductor was invented by Harald Strand, who serves as NeoDrill’s chief technology officer. “Tophole well design has been a neglected area because it’s considered to be low-tech, something that you might describe as “Xerox engineering’’ and copying what you did last time,” he said. “And that’s too bad because it’s an area where you can really save money for your company and make a big difference in the stability of the well.”

Conventional jetted tophole construction methods run the risk of a mismatch between the chosen conductor length and the attainable jetting penetration. This may require landing the conductor shallower than the planned depth (excessive stick-up). Or there may be insufficient outside friction to carry the conductor when the wellhead is at seabed. Both cases will render the conductor not fit-for-purpose.

“Conductor jetting requires some art,” said Jostein Aleksandersen, chief executive officer of NeoDrill. “You depend on the skill of the people, and it can vary even for the same crew on different jobs. But the CAN is an engineered, repeatable solution. The needed conductor length is shorter and set at a ‘comfortable’ depth, as the CAN will carry the loads. Thus, you can take the art out of the equation, as you no longer have to push for maximum shoe depth.”

Additional components are available to extend the CAN’s functionality and expedite well and field production.

The CAN is able to serve as a hub for prerig well construction, e.g., in enabling preinstallation of the flow base, flowline tie-ins, umbilical hookups, and other hardware. This makes it possible to install and tie in the complete production system before the rig arrives, work that may otherwise take 3 weeks following drilling and well cleanup.

NeoDrill estimated that placing a deepwater well on production 20 days sooner by prerig installation of the production system would save USD 5 million for a well producing 5,000 B/D at an oil price of USD 50/bbl. Handling multiple wells in a field together by this method would yield considerably larger savings.

Another component is the CAN-template, which is set on the seabed and has slots for four CANs. Once the wells are drilled, a protective cover is placed over the template. The company estimated that the completion of four template wells would save an average 10 days of rig time.