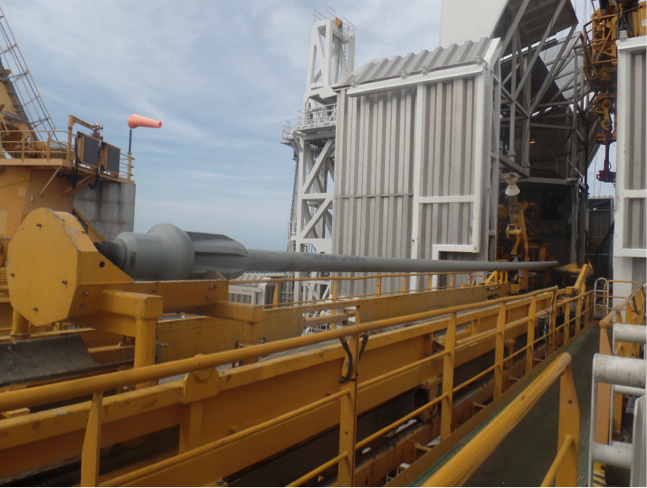 A new testing tool for subsea blowout preventers (BOPs) is enabling operators to test a device’s variable bore rams and shearing capabilities in a single run, cutting trip time in half and achieving large cost savings. The OneTrip Universal BOP Test Tool (UBTT), developed by Samoco Oil Tools in collaboration with Shell Offshore Engineering, enables pipe rams, blind rams, and shear rams to be tested without having to pull the tool back to the rig before the shear-ram test.

Rules set by the US Department of Interior’s Bureau of Safety and Environmental Enforcement require BOP functionality tests to be performed every 14 days during offshore drilling operations, and the standard has been generally adopted globally. Testing consists of separately staged subtests of the BOP’s three ram systems.

Until now, available tools were at most able to execute the pipe-ram and blind-ram subtests in a single run. The resulting round trip to the rig and back to complete the shear-ram subtest has meant an additional half-day or more of nonproductive time (NPT) at six-figure spread rates. And for tools that must be pulled after each subtest, the NPT has been greater.

“Drilling in projects requiring a subsea BOP can run into several months or more,” said M. J. Hellail, president and chief executive officer of Samoco. “With tests conducted every 14 days, the savings from reduced tripping can easily amount to millions of dollars for one well, and many projects involve multiwell programs.”

Further cost savings result from the tool’s high weight-bearing capacity compared with other subsea BOP test tools, which means less pipe is pulled from the hole to conduct the tests. Because the tool is verified to sustain loads of up to 1.2 million lbm, in most cases only that length of pipe equivalent to the water depth needs to be pulled. In addition to direct cost savings, operators using the tool in development projects gain the value of booking production revenue sooner because of earlier well startups.

The key to its ability to perform all subtests in a single run is a patented design that allows the OneTrip UBTT to disconnect from the bottom tool assembly after testing the large and small rams and move up through the BOP cavity to test the shear rams. (Disconnection is necessary to remove the assembly from the shear rams’ deployment path.)

Because the tool remains in the BOP the whole time, it is in position to repeat any subtest if needed. When all subtests, including that of the shear rams, have been confirmed, the OneTrip UBTT descends and reconnects with the bottom assembly. The tool is then pulled up to the rig.

Commercially, Samoco leases its tools to operators, who deploy them from contract drilling rigs. To advance the tool to commercial status, the company worked with Shell for approximately 2 years and proved the technology aboard the Stena IceMax deepwater rig, which was contracted to Shell in Canada offshore Nova Scotia.

The tool successfully completed full functionality testing on all subsea BOP rams in a single trip on Shell’s Cheshire L-97 well on 18 August, 2016. In a letter to Samoco 8 days later, Shell Drilling Operations Engineer Rob Rabei and Operations Superintendent John Cook noted that the tool had saved a 12-hour trip at a daily rig spread rate of USD 600,000. “This is a huge gain in performance and cost savings,” the Shell officials said. Since then, the tool has completed more than 10 full, successful BOP tests from the rig.

The OneTrip UBTT’s sealing system has a patented low-torque, high-pressure design to stand up to harsh subsea conditions. Made from specialty steel, the tool is designed and validated to withstand up to 25,000-psi pressure. As a universal tool, it can be used without modifications on any BOP stack configuration for the size of pipe to be tested.