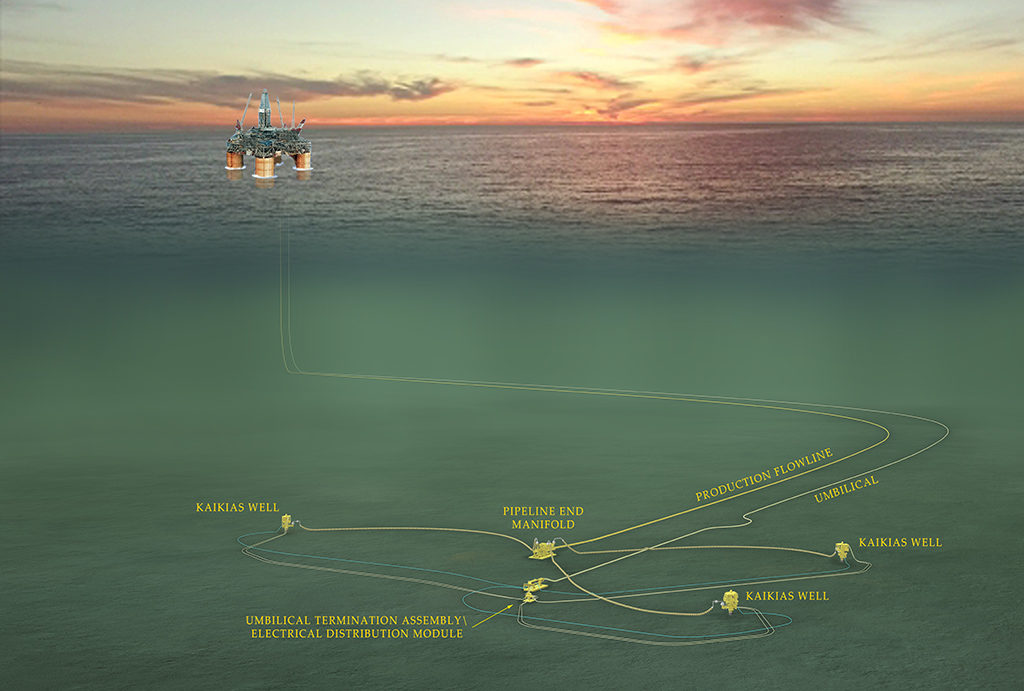 Illustration shows the development plan for Shell’s newest deepwater project, which will use existing platforms to produce oil and gas from a satellite field. Source: Shell

Shell announced this week that it will go forward with the development of the deepwater Kaikias project in the US Gulf of Mexico.

Calling the project an “attractive near-field opportunity,” the international major said it will be competitive at oil prices below USD 40 per bbl. The development plan calls for a subsea tieback that will transport oil and gas through a single flowline to Shell’s long-standing floating production facility, Ursa.

“Kaikias is an example of a competitive and capital-efficient deepwater project using infrastructure already in place,” Andy Brown, the upstream director of Shell, said in a press statement. “The team has done a great job to reduce the total cost by around 50% by simplifying the design and using lessons learned from previous subsea developments.”

The redevelopment of exploration and appraisal wells also allowed Shell to reduce the need to spend capital on drilling new wells. The company also said it has minimized the need for topside upgrades on the Ursa platform, which will help reduce operating costs.

Kaikias is to unfold in two phases, with the first planned to achieve production startup in 2019. That first phase will involve three wells that were designed to achieve peak production rates of up to 40,000 BOEPD. The Kaikias field is located about 130 miles offshore the Louisiana coast, and is within what Shell refers to as the Mars-Ursa basin.

Since last year, Shell has labeled its deepwater business to be a “growth priority,” which late last year represented output of about 725,000 BOEPD. By 2020, the company plans to push that figure to 900,000 BOEPD from its current backlog of discoveries.

Two of Shell’s discoveries in the Gulf of Mexico, Coulomb Phase II and Appomattox, are currently entering the pre-commissioning stage.