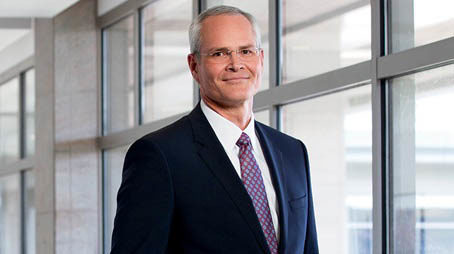 In his first major public address since becoming chief executive officer of ExxonMobil in January, Darren Woods said the company is committed to producing oil and gas while helping to minimize the industry’s impact on the environment.

“I want to challenge the assumption made by many that a growing economy and a cleaner environment are mutually exclusive; that as we step forward in developing more oil and natural gas, our environment—including our climate—must step back,” said Woods, who served as the company’s refinery head before taking over the top spot.

Woods spoke on Monday, the first day of CERAWeek, an annual gathering of oil and gas executives, regional leaders, and industry investors in Houston. His remarks were notable in part because they come as ExxonMobil faces accusations that it has historically downplayed its knowledge of the risks associated with climate change.

Several company projects were listed during the speech, ones that Woods emphasized are aimed at reducing emissions and increasing energy efficiency such as making biofuels from agricultural waste and algae. He also noted that ExxonMobil has a stake in about 25% of the world’s carbon-capture-and-sequestration capacity and that the company plans to invest more in this area.

Last year, the company also announced that it has partnered with technology developers to find out whether carbon fuel cells can be used to efficiently capture carbon dioxide on a large scale. Woods said that if this project can be used to capture emissions from power plants then it may bring about “a future in which hydrocarbon use and decarbonization go hand in hand.”

When it comes to the role of governments in such carbon-reducing innovation, Woods was cautious. He said governments can help drive innovation by opening up trade channels and creating transparent carbon pricing structures—something that ExxonMobil has supported in the past—but he knocked down mandates and subsidies for renewable energies, saying they “only hinder progress.”

Woods spent the remainder of his time speaking about how ExxonMobil has changed as a result of the North American shale revolution. While celebrating the fact that hydraulic fracturing has helped make the US a top producer of oil and gas in the world, he said the technology has also brought about a new era of investing for the country’s downstream and manufacturing businesses.

ExxonMobil is taking part in this investment excitement too. Dubbed “Growing the Gulf,” Woods explained that the company has embarked on an initiative that seeks to further capitalize on the proximity of US shale fields to its Gulf of Mexico refining base. Expansions of these facilities began in 2013 and will continue into 2022 to a tune of USD 20 billion.

In all, there are 11 projects along the US Gulf coast that ExxonMobil expects will create 45,000 jobs. “These projects are export machines,” Woods said, adding that these projects will be manufacturing refined products that will be sold to emerging nations. “The supply is here, the demand is there, and we want to keep connecting those dots.”

A lot more of that supply may be coming from ExxonMobil’s shale subsidiary XTO, which will be tasked with developing a new acquisition in the Permian Basin of Texas. Announced last week, ExxonMobil has inked a USD 6.6 billion deal for almost 250,000 acres in what Woods described as the “heart of the Permian.” He said the company is now focused on how to best deploy its various capabilities to develop this new opportunity in west Texas.