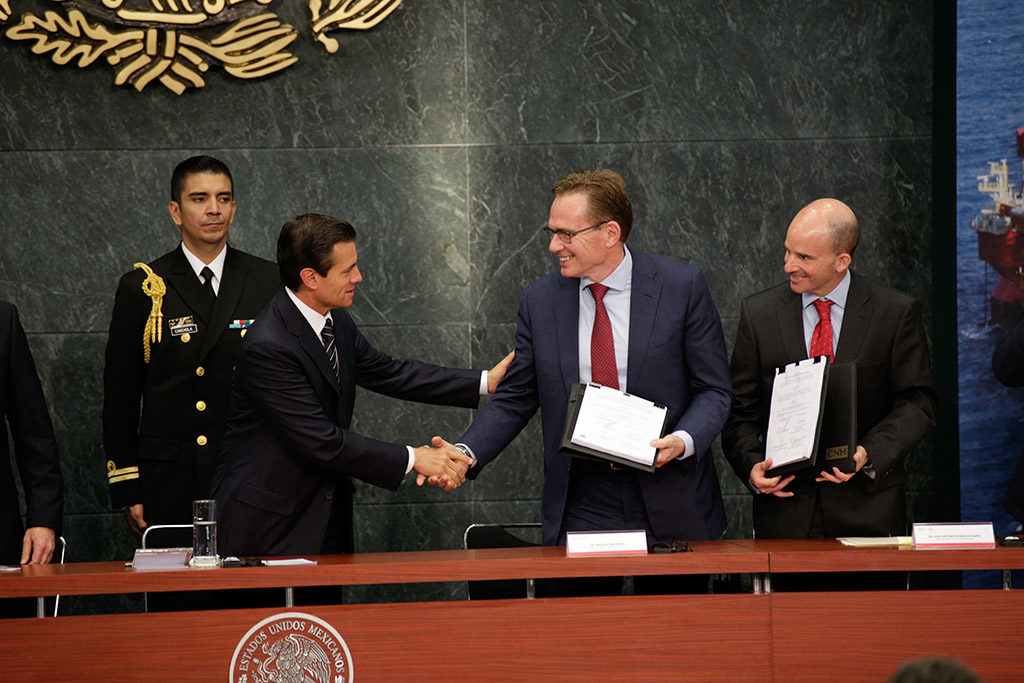 BHP Billiton’s signing of a contract with Pemex on 3 March marks the beginning of its work on the Triton discovery offshore Mexico and the potential to boost Mexico’s oil production to meet its growing demand. The company bid on the field last December in Mexico’s auction of 10 deepwater blocks in the fourth stage of the Round One bids since the country’s Energy Reform in 2013, which opened its offshore and unconventional fields to international companies. Once the field is fully appraised, BHP Billion expects it to be in the top 10 fields discovered in the Gulf of Mexico in the past decade. Pemex estimated the gross recoverable resource to be 485 million BOE.

The development of the Triton project is estimated to require an investment of USD 11 billion, with production beginning in 6–7 years. More than 100,000 barrels of crude oil equivalent per day are estimated.

Last year’s bid rounds opened the door to the expertise needed for expanded exploration and production in Mexico’s deep water. Although the country has significant hydrocarbon resources, it suffered from the pre-reform model that made Pemex the sole player in oil and gas upstream development, and the government’s spending of hydrocarbon revenue for other priorities, according to the International Energy Agency (IEA).

The main source of Mexico’s future oil production is expected to come from deepwater fields, accounting for almost half of the country’s projected oil output by 2040. However, the combination of falling oil production at mature fields (e.g., the offshore Cantarell field’s output has fallen by more than 80% since 2004 when it produced more than 2 million B/D) and rising demand has set up the country for significant shortfalls. Oil production (crude and natural gas liquids) stood at 2.6 million B/D in 2015, well shy of the high point in 2004 of 3.8 million B/D.

Mexico’s projected crude oil production dips to less than 2 million B/D toward 2020 and then rises as the new projects evolving from the Energy Reform take hold. The IEA forecasts that by 2040, crude oil output returns to 2.4 million B/D, but adding in natural gas liquids and some tight oil takes total oil output up to 3.4 million B/D. 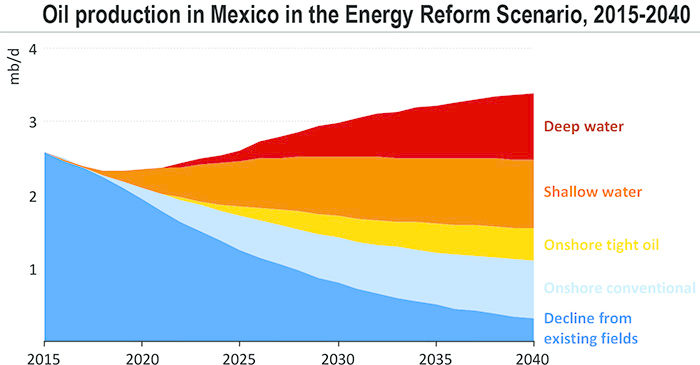 What Could Derail the Needed Production?

Speaking this month at the Norwegian Energy Partners’ US-Norway Technology Conference in Houston, Helge Hove Haldorsen, general director at Statoil Mexico and 2015 SPE president, said huge investments are needed to achieve the projected 3.4 million B/D by 2040. The IEA’s scenario under the Energy Reform calls for investment of USD 640 billion in upstream, or an average investment of approximately USD 30 billion/year.

He highlighted the need for urgency in the country’s offshore developments. “Mexico needs to monetize its offshore hydrocarbons while demand exists. If Mexico offers better terms and conditions, which must be competitive and predictable, ‘economic gravity’ will occur. Markets drive activity. Exploration wells [wildcats] will have a ‘snowball’ effect.”

Haldorsen said the production goal could be derailed by several factors:

Another uncertainty is the outcome of Mexico’s 2018 presidential election. If the new president, who will serve a 6-year term, isn’t a proponent of the Energy Reform, Haldorsen said, “He can’t undo the constitutional change [made in 2013], but he can slow down the process.”

Mexico’s Round Two licensing bids are planned for kickoff in mid-2017:

Round 2.1. Fifteen shallow-water blocks will be auctioned. Deadline for prequalifying in the round is 24 March; winners to be announced on 19 June.

Round 2.2. Twelve onshore blocks to be auctioned. Deadline for prequalifying is 11 July; winners to be announced on 12 July.

Round 2.3. Fourteen onshore blocks to be auctioned on 12 July.