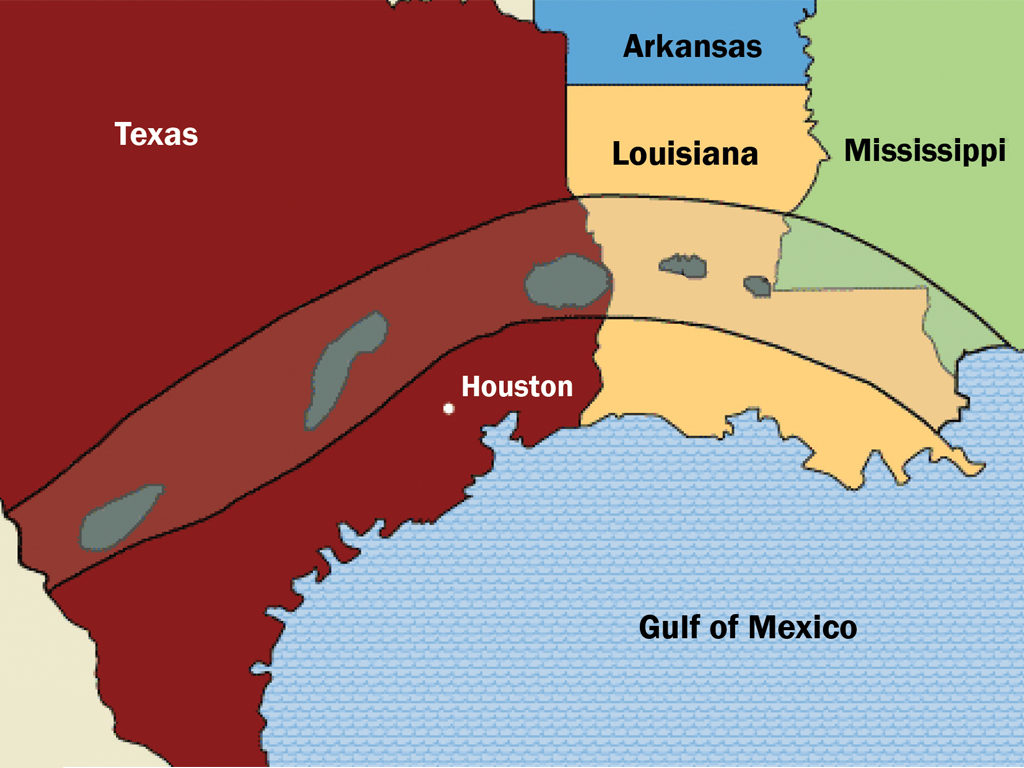 The US portion of the Austin Chalk trend (between black lines), with its major producing fields shaded in gray. The trend extends into Mexico. Source: Paper SPE 145117.

The Austin Chalk formation holds the potential for a resource development revival if the industry can look at it  through “a fresh set of eyes,” Tony Maranto, executive vice president and chief operating officer at EnerVest, told the SPE Gulf Coast Section’s Business Development Study Group recently.

Application of the latest technologies and development methods could “move the needle,” he said, in a formation that has produced since the 1920s and has experienced more than one heyday—the last one in the 1990s as horizontal drilling was introduced.

Maranto, a 35-year industry veteran, joined EnerVest in August 2016 after more than 20 years with EOG Resources. He stressed that he was giving his own views and not necessarily those of EnerVest, which is the largest producer in the Austin Chalk.

“I’m not going to end this talk by telling what’s going to happen in the Austin Chalk, but I will talk about what can happen,” Maranto said.

“In today’s unconventional exploration,” he continued, “you start where oil and gas are already produced.”

The Austin Chalk, which stretches from Mexico across south and east Texas and Louisiana to Mississippi, has been producing for some 90 years. Approximately 9,500 wells have been drilled in the Chalk, and cumulative production is 1.7 billion BOE.

Maranto explained that the formation, over the life of the play, has seen at least a couple of production booms that have resulted from the application of new technology, and this opportunity is present today. If acted upon, he said, the industry could potentially “expand the amount of supply almost geometrically.”

He went through the evolution of technology applied in the field, giving examples from specific wells. He pointed to a 1972 vertical well in Texas’ Giddings field that was hydraulically fractured and went to an estimated cumulative production level of 500,000 BOE from a prior estimate of 50,000 BOE. “Light bulbs should have gone off right then and there,” he said.

Seismic surveys shot in the 1970s led to improved understanding of the reservoir, and fracturing activity expanded in that decade and the next.

In the 1990s, operators started to apply horizontal drilling to connect the highly productive natural fractures prevalent in the Austin Chalk and production surged. With better reservoir knowledge, the industry realized that the Chalk consisted of several hydrocarbon-rich benches. Drilling horizontally and staying within a given bench increased wellbore exposure to productive zones and resulted in better wells, Maranto said.

Horizontal stimulation treatments began, in which acid and water were bullheaded into the formation. Maranto cited a lateral that had produced 40,000 BOE before stimulation and after the acid and water treatment was able to achieve a final cumulative oil production of 137,000 BOE.

With a number of treatments done in horizontal wells, probability distributions calculated circa year 2000 predicted that new wells to receive such treatments would most likely achieve cumulative production ranging from 250,000 BOE to 300,000 BOE, he said.

The Map Has Changed

Since then, the shale revolution has changed the map of drilling and development activity in the United States, and the Austin Chalk passed out of the limelight.

However, Maranto noted the success of recent horizontal wells in the Chalk that were completed by means of openhole, multistage fracturing with fluid diversion methods. Cumulative production estimates for some of the wells have risen to 650,000 BOE, and the probability distribution for the wells executed with these techniques yields a mean value of 575,000 BOE.

He suggested that the future of the Chalk be viewed in light of other prolific legacy conventional plays that were “passed over” for years but have seen revivals with the advent of unconventional drilling and completions (D&C). He cited the Delaware Basin in west Texas and the SCOOP (South Central Oklahoma Oil Province) and STACK (Sooner Trend, Anadarko [Basin], Canadian [County], and Kingfisher [County]) plays in Oklahoma.

“That acreage that’s being drilled now in the SCOOP/STACK, you could have bought it 10 years ago for next to nothing,” Maranto said. “That’s the second timeliest acreage in the country. Why? We know why—multistage, high-density stimulation.”

There, as in other unconventional plays, the industry is essentially increasing conductivity in low-permeability source rock or rock juxtaposed to it.

“Why is the Chalk any different? How can we relook at the Chalk through those same lenses?” Maranto said.

Historically, Austin Chalk operators have focused on areas with large natural fracture networks, which have been the most productive under mainly conventional D&C methods. However, for oil development with high-density hydraulic fracturing, extensive natural fractures can lead to fluid loss and unwanted gas influx. Thus, the less fractured areas could be the preferable targets for unconventional D&C.

“We have to change our perspective,” Maranto said. “We have to understand the properties of the Chalk that are comparable to other plays that work.”

He presented a slide comparing rock property data from the log of an Austin Chalk well in Karnes County, Texas, that had received high-density stimulation and similar log data from two random Chalk wells in Burleson and Washington counties (Texas) that had not received the treatment. All three wells had approximately equal amounts of oil in place. However, the treatment had shifted the estimated cumulative potential of the Karnes County well to between 1 million BOE and 1.5 million BOE from a level of 350,000 BOE before stimulation.

“Why is it working in Karnes County? Is Karnes County the only place it can work?” Maranto said. “This is the result that you’re looking for. How many times can you achieve this across that three-state area? That remains to be seen. But I’m telling you, it’s going to take this [meeting] room and rooms like this to push this forward.”