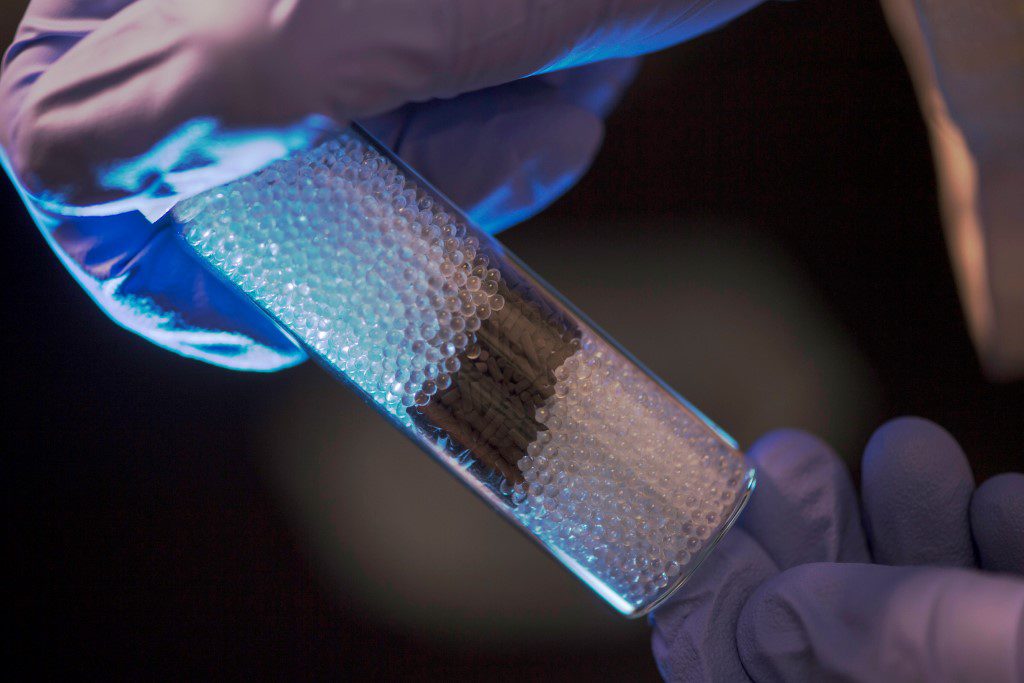 A catalyst made of nanoparticles of gold on alumina with palladium atoms successfully treated chloroform-contaminated groundwater and is effective in treating other water contaminants such as nitrates, nitrites, and nitrophenol. Source: Rice University.

Nanotechnology could have a big future as a tool for upstream oil and gas and other industries to use to clean up contaminated water, Professor Michael S. Wong of Rice University, Houston, told the SPE Gulf Coast Section’s R&D Study Group recently.

Wong, chair of the university’s chemical and biomolecular engineering department, said that the multidisciplinary nanotechnology field has sufficiently matured to enable researchers and practitioners to envision real prospective solutions to water contamination problems.

Water is by far the largest byproduct of the fossil fuel industry. Wong’s presentation noted that in the US, oil industry well operations produce in aggregate approximately 10 times as much water as they do oil, and in Canada the water/oil ratio is 14 to 1.

Wong focused on progress that has been made in developing catalysis methods—catalytic conversion—for water pollution control, a prime area of his research that involves the Catalysis and Nanomaterials Laboratory at Rice. Within the oil industry, catalysis plays a major role in petroleum refining operations such as cracking and reforming. In addition, Wong said, “An exciting new role for catalysis is in the treatment of produced water for reuse.”

Introducing a catalyst into a chemical process can bring about or speed up a chemical reaction, with the catalyst remaining unconsumed in the reaction and thus able to act repeatedly. Only tiny amounts of catalyst are needed to achieve these effects.

Wong stressed the advantage of catalytic conversion techniques over the established methods of activated carbon adsorption and air stripping that are used to remove many contaminants from water. By changing the chemical composition of the contaminated water, catalyzed reactions can break down and eliminate the contaminating agent. With the other processes, the contaminant is removed but disposal issues remain. Catalysis methods will also work much more quickly than the other techniques, Wong said.

He posed the example of treating water contaminated with trichloroethylene (TCE) by traditional methods vs. a catalytic technology that his research group has developed. TCE, a chlorinated hydrocarbon and dense, nonaqueous phase liquid, ranks high on the US government’s priority list of hazardous substances, is present at most of the country’s toxic waste disposal sites, and is difficult to get rid of.

Activated carbon treatment can remove it from water, but when the carbon becomes saturated with TCE, the carbon must be disposed of or cleaned by burning off the contaminant.

“That TCE is moving around, whether to a landfill or going back up into the atmosphere,” Wong said. “Or if you are really combusting it, you will turn the TCE into dioxin [another priority hazardous substance]. So that molecule remains in the system.”

In air stripping, the contaminated water is pumped through a series of baffles while forced air volatilizes the contaminant to remove it, following which it is collected and may receive additional treatment. However, a contaminant, such as TCE, will leave deposits that eventually must be cleansed from the stripper. The cleansed residue will then be sent to an activated carbon bed. While one problem has been solved, “you now have another contaminated stream to deal with,” Wong said.

The family of catalysts that Wong and his researchers have developed incorporate nanoparticles of gold on alumina with palladium atoms arranged in various thicknesses on top of the gold. When even a tiny amount of catalyst is injected into TCE-laced water, the contacted TCE chemically falls apart. By adjustments in the amount of palladium, the surface coverage of the catalyst can be altered as needed. The process works “about 100 times faster than processes on the market now,” Wong said.

The catalyst has performed very well in the laboratory, he said, and his group is working to bring the technology into field applications. The gold-palladium catalysts are effective in treating a number of other water contaminants such as nitrates, nitrites, and nitrophenol, according to Wong. The catalyst cost is minimized because nano amounts are used.

A catalyst from the same group was used to treat chloroform-contaminated groundwater at a DuPont chemical plant a couple of years ago. The company was already using carbon adsorption to address a chloroform problem that had arisen and wanted to test the catalyst. Special three-stage reactors were built to perform the catalyst treatments, which proved successful, Wong said.

He also discussed work by the Nanosystems Engineering Research Center for Nanotechnology-Enabled Water Treatment (NEWT), a collaborative initiative between universities, industrial companies, and other organizations. It is funded by the US National Science Foundation.

The NEWT partnership is focusing on the development of 1) off-grid humanitarian, emergency-response, and rural drinking water treatment systems, and 2) industrial wastewater reuse in remote sites such as oil and gas fields and offshore platforms. The goal is to devise modular systems that would function at whatever scale is needed.

Technology projects are under way to develop

The aim of the new site is to report the positive stories about how our industry is having a beneficial impact on people’s lives.