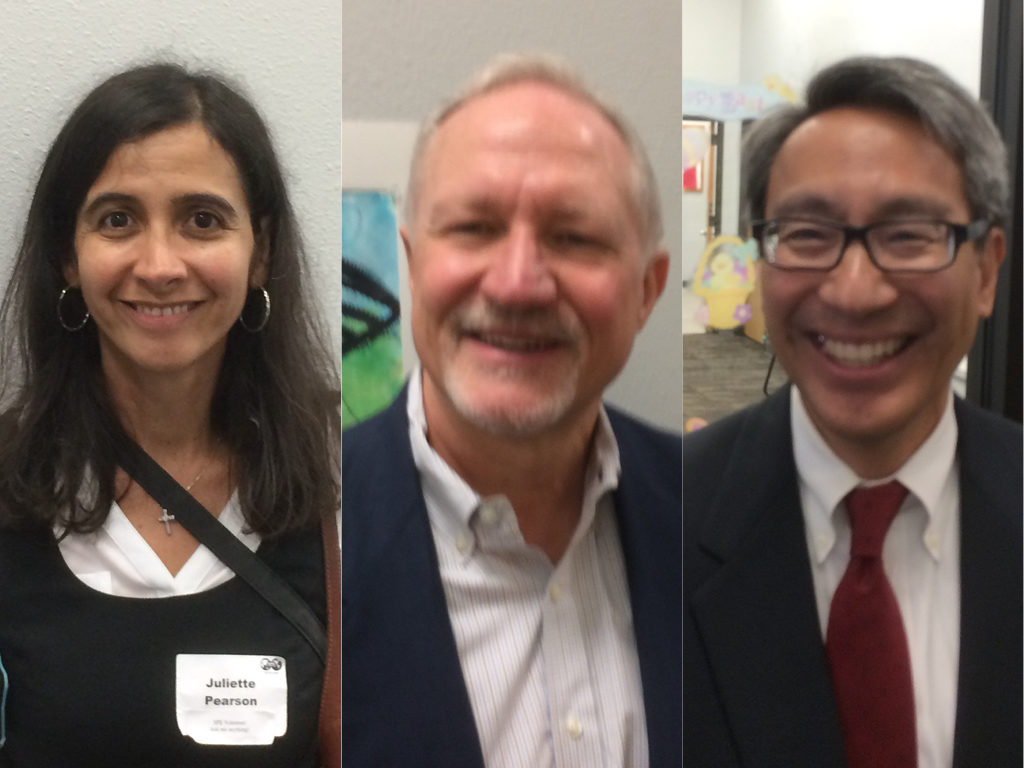 The three job seekers are (from left to right): Juliette Pearson, James Rodgerson, and Howard Gee.

Unconventional exploration has come back strong in Texas, but for engineers looking for work in Houston, it is still a tough slog.

At a job fair put on by SPE’s Gulf Coast Section this week, hundreds of engineers and other oil and gas professionals waited patiently to make their pitch to a group of about a dozen employers, with lines stretching the length of a large meeting room to meet representatives from Halliburton and Baker Hughes.

When asked how their job hunt is going, the consensus was that the mood is better than when oil prices hit bottom a year ago. They could say that with authority because most have been out of work longer.

Howard Gee, a petroleum engineer with 36 years of experience, recently got his first face-to-face interview after more than a year of looking

John Moore, whose most recent job was in unconventional exploration in the Permian Basin, said he has had some consulting jobs, but they have been “few and far between.”

Juliette Pearson, one of the SPE volunteers organizing the event, was excited about a consulting job for an independent oil company, Australis Oil & Gas, which is drawing on her skills for reservoir evaluation and acquisition to move into a “misunderstood” unconventional play.

The number of job seekers that day was limited to 350 members of SPE and 11 other professional organizations. The number was limited by the capacity of the community center. The fact that it was free was a big plus for the Gulf Coast Section’s Members in Transition Committee, which has been offering a lot of help on a little budget.

“If we left it open, we would have gotten 1,000 people but, with 13 employers, the lines would be 50 people deep. Would that help anyone?” said Susan Howes, the chair of SPE section’s Members in Transition Committee. The online announcement of the Upstream Oil and Gas Professionals Hiring Event led to comments from SPE members elsewhere asking other sections to hold a similar event.

The biggest names at the event, Baker Hughes and Halliburton, attracted the most attention. Halliburton recently said it would be hiring 2,000 workers as service companies and drillers are struggling to hire enough people to keep up with rising drilling and fracturing demand.

That does not translate into big gains for engineers. Packers Plus, which supplies the hardware needed to isolate stages during fracturing, had representatives there to collect resumes for future openings.

“I talked to a lot of good people here. I wish I could go back and call them and say we have a job for them,” said Heidi Swartz, a human resources manager for Packers Plus.

A company selling drilling monitoring and analytics software, Moblize, was looking for experienced drillers who would be good at teaching a growing group of users how to effectively use its software, which displays and analyzes key drilling measures.

“Our business has picked up significantly from a year ago,” said Robert Purvis, chief administrative officer for Moblize. But demand is not back to what it was when things were booming.

The big reason unconventional drilling is growing is because it has gotten much more efficient, but with one drilling rig doing what two once did, it limits demand for people and services.

Veterans among the job seekers said it was the worst downturn they had experienced.

“I was laid off before but I didn’t miss a day of work,” said James Rodgerson, whose firm is Rodgerson Completion Consulting. He has neared the value of staying active, avoiding isolation, and helping others through the Pay-It-Forward Networking program.

In this intensely competitive market, older job seekers said that employers are more likely to hire a candidate 5 years out of college over one that is 5 years away from retirement.

Those lining up to pitch their skills said they have considered looking outside exploration and production for work.

“You are supposed to have a plan B,” Pearson said, adding, “I thought about that and concluded I am passionate about what I want to do.”

Gee said he is working to saying in E&P because, “I love the field of oil and gas.”

Those who want to stay in the business need to be flexible about the kind of company they work for, Howes said. In her case, that meant going from Chevron to a consulting firm, Subsurface Consultants & Associates, where she is vice president of engineering.

These companies value experience because they need people who have acquired strong technical and people skills. The placement can range from consulting projects to serving as rent-a-mentors.

Consulting and placement firms were represented at the event, including a recent online startup, PetroCubic, which was gathering a list of oilfield professionals seeking contract work, said Tatiana Sauter, marketing director for PetroCubic, who described the company as the Uber for oil and gas technical projects. The company will seek to match people with companies needing short-term workers for projects, and charge the engineer 10% of the rate that person negotiates, according to the company website.

The biggest group on the employer list were the five companies selling digital services and software. The ranged from production monitoring to reservoir evaluation and modeling. They promise to make engineers more productive by doing more with data, and doing it faster. Now that machines have taken on those tasks, engineers need to concentrate on adding value in other ways.

“If software can do what an engineer can do, you can do it with software,” said Prathamesh Sinha, a petroleum engineer who came to Houston to look for a petroleum engineering job from Los Angeles. Asked how his short meetings had gone, he said he felt he did well, but added that the big question is what the companies thought of him.