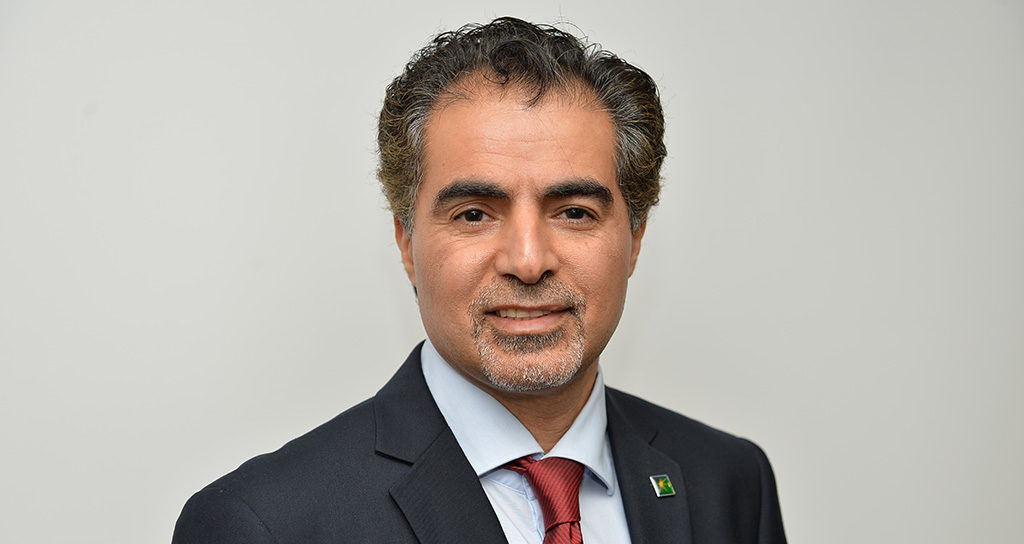 Sami Al-Nuaim is the nominee for 2019 SPE President. He and eight others make up the slate of nominees recommended for positions open on the SPE Board of Directors.

Sami Al-Nuaim has been with Saudi Aramco for 30 years, where he has worked in reservoir engineering, production engineering, research and development, and at the upstream computer center. He currently serves as manager, Petroleum Engineering Application Services, where he has full responsibility for providing technical information technology support to all upstream operations, including exploration, drilling, production, reservoir engineering, and facility design. A current area of focus is reservoir simulation of giga cells and giga models using Saudi Aramco’s GigaPOWERS simulator.

Al-Nuaim has a long history of service to SPE and is currently a member of the SPE Middle East Board of Directors. He has won several local, regional, and international awards, including the SPE Regional Service Award for the Middle East in 2010 and the SPE Distinguished Service Award and SPE Distinguished Member in 2011. He currently serves on the society’s ­DeGolyer, Rand, and McConnell Awards Committee and the 2017 SPE Annual Technical Conference and Exhibition Executive Advisory Committee.

He has published a number of technical papers, holds several patents related to well performance, and teaches petroleum engineering at King Fahd University of Petroleum and Minerals (KFUPM). Al-Nuaim serves on the petroleum engineering departments’ advisory boards at KFUPM and King Saud University. He is a key figure in the Saudi and Middle Eastern energy and media sectors, having published more than 300 articles on oil and gas and energy in Saudi newspapers.

Elizabeth J. Cantrell is executive vice president and chief operating officer at Concord Oil Company and affiliates in San Antonio, Texas. She has held leadership positions with independent and major companies, having managed projects in many United States basins and internationally.

Before joining Concord, Cantrell was chief executive officer of Kerns Petroleum in San Antonio. She previously held various engineering positions with Samson Resources in Tulsa and with Chevron in Houston and Midland, Texas.

Birol Dindoruk is a principal technical expert and team leader in international reservoir engineering for Shell. He is an adjunct faculty member at the University of Houston department of petroleum engineering and a consulting professor at the Stanford University energy resources engineering department. He is a global consultant for fluid properties (pressure/volume/temperature) and miscible/immiscible gas injection enhanced oil recovery and reservoir simulation.

Dindoruk is a recipient of the SPE Cedric K. Ferguson Medal (1994) and Lester C. Uren Award (2014). He was selected this year as a member of the National Academy of Engineers. Dindoruk has served SPE in various capacities, including as co-Executive Editor of the Formation Evaluation/Reservoir Engineering Journal (2004–2006) and as a Distinguished Lecturer for 2010–2011.

Jean-Marc Dumas is the founder of PCMC, an international consulting and engineering contractor in Paris, France, that has specialized in energy since 1998.

Dumas began working for Total in the Middle East and then in Asia as a development engineer. In 1983, he joined Coflexip (now TechnipFMC), where he was in charge of export sales promotion. Dumas subsequently worked for Perrotin Corporation (now Reel Group) as a plant and sales manager.

He has spent much of his career in international and executive positions that have included technical responsibilities in the petroleum production, development, research, and refining sectors.

Dumas founded the SPE France Section in 1984 and held various positions, including leader of the industry advisory committee, editor of the monthly magazine La Lettre de la SPE France, and section chairman. He is a recipient of the SPE South, Central, and East Europe Regional Service Award (2010) and the SPE Distinguished Member Award (2016). Dumas was elected Honorary President of SPE France in 2016.

Johana Dunlop has worked for Schlumberger for the last 25 years, most recently as director of sustainability integration. She is deeply committed to the importance of the industry being recognized for its critical role in the quality of life globally, while it simultaneously raises its standards of environmental and social performance to the point of achieving the full integration of sustainability factors in decision-making, performance accountability, and innovation for the future.

Since 1998, Dunlop has focused on supporting Schlumberger in advancing and accounting for its sustainable development performance, in particular for local content, social risk management, human rights, greenhouse gas emissions, community outreach, and issue management. Previously, she was the risk manager for the wireline, seismic, and data management businesses.

For the past 10 years, Dunlop has actively served SPE and the International Petroleum Industry Environmental Conservation Association. She led the development of the SPE sustainability strategy and is the chair of the SPE Sustainability Technical Section. With a colleague from Total, Dunlop cofounded a professional network for women in sustainability and business.

She has an MS degree in management, a BA degree with honors in the liberal arts, and a professional Associate in Risk Management designation from the Institute of Risk Management.

Ramona M. Graves is the dean of the College of Earth Resource Sciences and Engineering and a professor of petroleum engineering at the Colorado School of Mines in Golden, Colorado. She has an extensive background in multidisciplinary reservoir characterization, rock mechanics, environmental issues in petroleum development and production, and high-power-laser-rock-fluid interaction.

Graves has taught industry short courses on these topics throughout the United States, South America, Australia, Russia, the Far East, and Europe. She is a Distinguished Member of SPE. She serves on SPE’s Academic Advisory Committee and is a member of the Research and Development Technical Section.

Graves has a doctorate in petroleum engineering from the Colorado School of Mines and a bachelor’s degree in mathematics and physics from Kearney State College. She also holds an honorary doctorate from the Mining University of Leoben, Austria, which was awarded in recognition of her scientific achievements and contributions to the field of petroleum engineering.

Russia and the Caspian Regional Director

Aizhana Jussupbekova is the Satellites reservoir engineering lead at the North ­Caspian Operating Company (NCOC), Atyrau, Kazakhstan. Her work experience includes dynamic model building, reservoir simulation, depletion and development planning, reserves estimation, and project coordination. Before being seconded to NCOC at Astana, Kazakhstan, she worked as a reservoir engineer for ExxonMobil in Houston.

Jussupbekova joined SPE in 2006 while at Texas A&M University. She served as a student chapter officer in 2007, cofounder and programs chair of the Astana Section in 2013, a member of the global Energy Information Committee in 2015–2017, and SPE Caspian Conference and Exhibition co-chair and chair in 2014 and 2016, respectively.

She holds a master’s degree in petroleum engineering from Texas A&M, and bachelor’s and master’s degrees in chemistry from Kazakh National University.

César Patiño is a technology specialist in enhanced oil recovery at Ecopetrol and an expert adviser on oil and gas sector innovation.

He founded an SPE young professionals group within the Colombian Section and a chapter of the Society of Petrophysicists and Well Log Analysts, as well as starting various social and technology initiatives to support the integration of academia and industry in Latin America. He has served on numerous conference and workshop program committees in the region.

Patiño was awarded the SPE regional Formation Evaluation Award in 2012.  He holds a bachelor’s degree in petroleum engineering from Universidad Industrial de Santander and a master’s degree in business administration from the INALDE Business School at the Universidad de La Sabana.

Tapas Kumar Sengupta is director (offshore) at ONGC and is based in New Delhi, India. He has more than 36 years’ experience spanning a wide variety of upstream oil and gas functions, including well services, facility engineering, deepwater development, asset management, and joint-venture operations. Sengupta has been involved in in many high-value offshore and onshore projects in India and internationally.

Representing ONGC’s overseas interests, Sengupta held the position of general manager at the Greater Nile Petroleum Operating Company in Sudan, where he was responsible for production operations from oil fields in the country’s Heglig area. He also heads ONGC’s marketing, joint ventures, and business development groups and is director in charge of ONGC Petro Additions, which is a mega-petrochemical joint venture.

Sengupta has participated in various SPE events in India and abroad as a panel speaker, session chair, and keynote speaker. He was recognized as an SPE Distinguished Member in 2012. He has chaired the SPE Mumbai Section since 2014.

The nominated directors will serve on the Board of Society of Petroleum Engineers (SPE), Inc. along with these continuing directors who are also confirmed as nominated and elected: