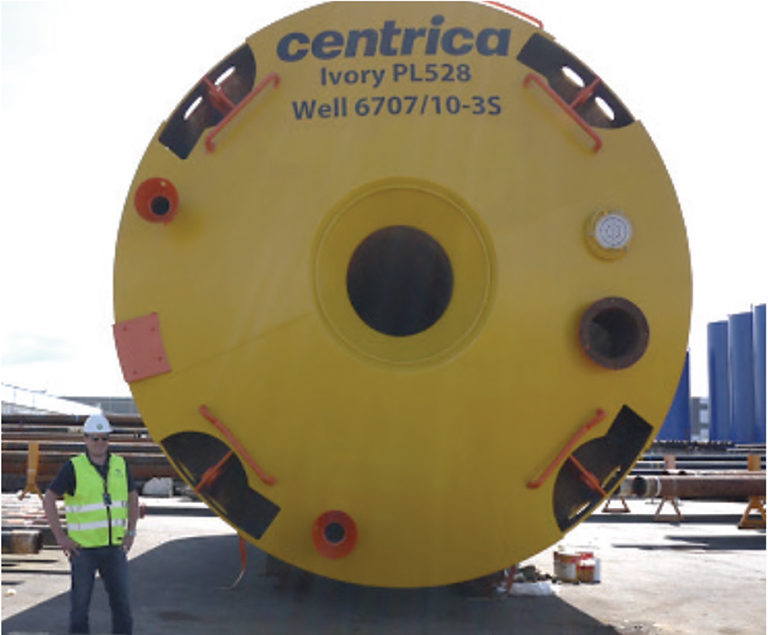 Source: NeoDrill.
The CAN lying on its side at the surface.

The conductor anchor node (CAN) technology was introduced as part of the architecture for Centrica’s Ivory deepwater exploration well in the Norwegian Sea to optimize efficient operations for the well’s riserless section.

The CAN (Fig. 1), developed by NeoDrill, is a large steel cylinder that is open at the bottom with an open guide pipe in its center. The device sets into the seabed, working similarly to a suction anchor, and carries and secures a well’s conductor (top-hole casing).

The CAN is set in place by a dynamically positioned (DP) installation vessel before the drilling rig arrives. The technology is designed to save rig time and expense, simplify logistics and rig operations, and expedite well startup.

With the CAN, seabed marker buoys and DP transponders were preinstalled by a construction vessel in June 2014. The spud location was prepared for an efficient startup when the drillship arrived in October of that year.

A pilot hole was drilled 50 m offset from the preinstalled CAN to investigate for shallow hazards and record useful drilling parameters to determine soil strength.

The interpreted soil strength information was used for selecting the optimum conductor length for jetting it in and landing in the CAN. The conductor jetting method was chosen to optimize the dual-derrick rig operations.

All the riserless activities using the dual derricks were optimized to reduce the rig time and maximize the parallel-activities advantages.

The overall strategy for the well was to perform as much work as possible before rig arrival, to reduce exposure to weather and optimize operations in the riserless sections of the well.

NeoDrill was contracted for preinstalling the CAN to facilitate safe jetting operations and reduce the conductor string length, which is made possible for jetted or cemented conductors by the high axial load-bearing capacity of the CAN system.

Conductor analysis concluded that a 50-m CAN-supported conductor would suffice, compared with the 80- to 100-m length required for a conventional conductor. Conductor jetting is the quickest installation option, as it does not require cementing operations, tripping for a new drilling bottomhole assembly (BHA), and drillout.

The conductor jetting operation was performed using a special conductor running and drillout tool, the Dril-Quip Cam Activated Drill Ahead Tool (CADA tool), which allows each new section to be drilled without tripping for a new BHA.

The CAN allows the conductor to be landed safely without waiting for soil to consolidate (soak) before the CADA tool is released for drilling to resume. Thus, the risks of the conductor and wellhead housing sinking after the tool’s release are mitigated.

To verify that jetting was feasible and to determine the optimum conductor jetting length, a penetration test was performed in a pilot hole drilled about 50 m offset from the CAN location.

The pilot hole had to be drilled from the auxiliary rig as the blowout preventer (BOP) and riser could only be run from the main rig. To be ready to land the BOP and riser on the wellhead, when surface casing was cemented and the running tool was disconnected, the main rig could not be occupied by the conductor.

The conductor was made up in the main rig and thus was landed off in the hang-off skid in a mid-position in the moonpool to keep the main rig available for running the BOP and riser.

The running of the BOP and riser started offline in the main rig, while the auxiliary rig jetted the conductor and drilled ahead for the 17½-in. section. The BOP was ready to be landed a few hours before the 20×13⅜-in. surface casing was cemented in place and the running tool was disconnected.

The CAN, marker buoys, and transponders were installed in the seabed at a water depth of 1444 m by the vessel Normand Reach 4 months ahead of the drillship’s arrival. The final inclination of the CAN was 0.42°.

The whole offshore CAN installation operation, including mobilization and sailing, were completed in 4 to 5 days. The total CAN installation time from “touch-down” at seabed until full penetration took 4 hours. A separate set of transponders and marker buoys for the pilot hole were preinstalled at the seabed to save rig time.

The pilot hole was drilled ±50 m southwest of the main location, which was fixed by the CAN.

A penetration test was conducted in the upper part of the pilot hole to assess the feasibility of jetting the conductor.

Very little weight on bit (WOB) was applied in the upper part of the pilot hole, and data collection was difficult because of the 4- to 5-m rig heave. WOB of 5 tons was recorded between 1495 m and 1505 m, indicating a more competent formation. A significant change in formation strength was seen at 1501 m to 1502 m.

The section was thereafter logged to confirm that a dominant clay sequence was present at the bottom part of the hole to verify that the conductor jetting operation could be executed.

The pilot hole was thereafter drilled from 1505 m to a vertical section depth of 2200 m.

In the jetting operations, the conductor string consisted of

The total conductor was 49.8 m long and was run with a (NeoDrill) conductor hanger to enable land-off into the CAN.

The CADA tool was made up as part of the drilling BHA. A remote-operated vehicle verified the correct space-out of the bit vs. the bottom of the 30×36‑in. conductor. Thereafter, the assembly was to the top of the CAN.

The 30×36-in. conductor was stabbed into the CAN, whereafter the 44-in. CAN center-pipe was cleaned out at a 2500‑L/min flow rate until no overpull was observed, to ensure safe landing of the 36-in. housing into the CAN.

The flow rate was reduced to 1000 L/min for cleaning out the bottom 2 m of the center-pipe and jetting the first few meters below the CAN to avoid washing out the formation below the CAN.

The conductor was worked upward every 2 to 3 m because of the importance of keeping the conductor moving while jetting. Slackoff weights and pickup weights developed in a relatively linear manner.

Good jetting practice is to prepare a slackoff curve as a road map and apply weight accordingly. The 80% of the BHA weight hanging in the CADA tool can be applied in addition to the weight of the conductor.

There was only one connection performed while jetting, which was planned at approximately 15 m above total depth. Before making the connection, the conductor was worked twice the length of one full joint and was circulated clean with two 10 m3 high-viscosity sweeps to mitigate the risk of sticking. The connection was performed without any issues despite the 2- to 3-m rig heave.

Once the casing was landed, the CAN’s axial loading capacity allowed the release of the CADA tool so that drilling operations in the 17½-in. hole section could proceed immediately, without the conductor needing to soak for (a normal period of) several hours before the tool’s release. Fig. 2 shows the conductor ­housing with the CADA tool landed inside the CAN.

The Ivory drilling operations demonstrated that combining the CAN with a short jetted conductor was a successful means of achieving an effective dual-derrick operation in the riserless well section.

Significant time efficiency was achieved in this part of the well. With 4.6 rig days between well spudding inside the CAN and landing the BOP, 7.3 days were saved compared with the expected P50 time plan.