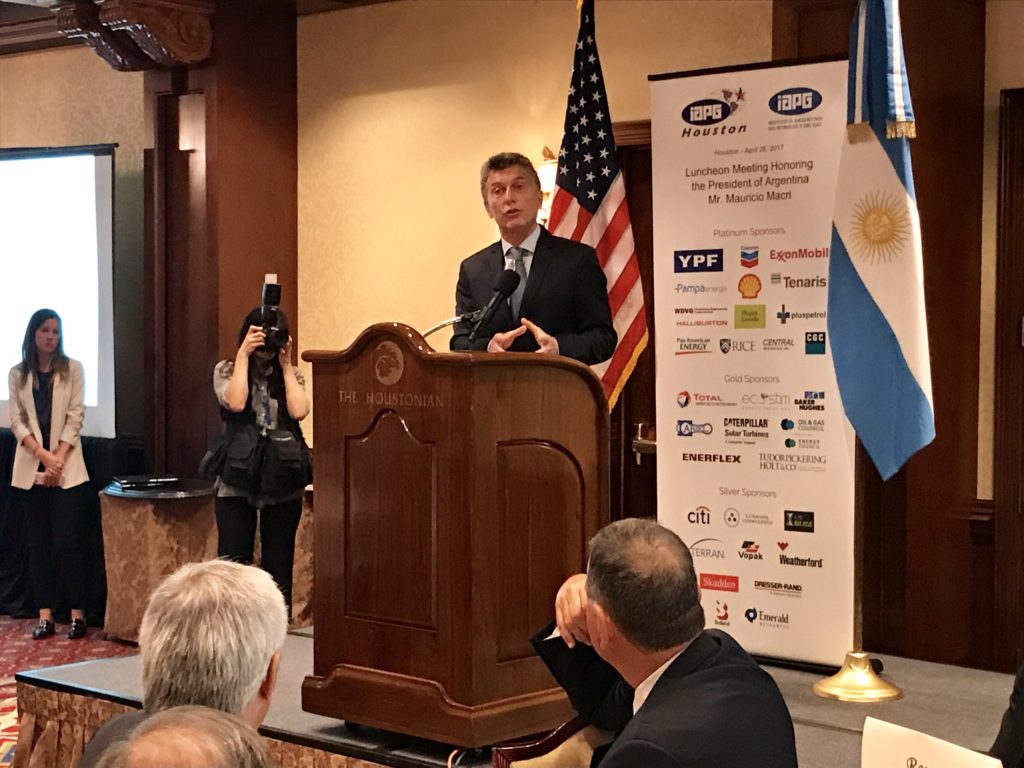 Before visiting the White House in Washington, D.C., this week, Argentine President Mauricio Macri made an extended layover in Houston, where he met with oil and gas industry executives. The 1-day trade mission underscores Argentina’s growing ties to the unconventional sector in the US from which its domestic operating companies have sought expertise and learnings on shale development.

But Argentina also needs more outside investment to expand its ability to produce oil and gas from the Vaca Muerta shale play and other unconventional prospects. The play is estimated to hold the third-largest reserves in terms of recoverable gas and fourth-largest for oil. Speaking before more than a hundred industry leaders on 26 April, the president summarized the work his government has done so far on this front.

Among them is the removal of bureaucratic barriers that allow state-owned producer YPF to more easily enter into joint ventures with other companies. This year, the company is launching at least 10 such projects, but the government wants more.

“We know there are many areas that need to be developed, and all of the financial capacity is not yet there, so they are looking for new partners,” he said of YPF. He added that the new conditions mean that “foreign and Argentinian companies will be able to work side by side with the same goal: to produce energy sustainably, in a safe way, and at the lowest possible cost.”

To learn more about the activity of leading operators in Argentina, click here.

Macri also emphasized that in contrast to the former executive administration, one that was marked by severe government financial difficulties and a controversial debt default in 2014, his is pushing for greater transparency and business-friendly legislation. He said realizing the country’s unconventional potential will require more government-backed initiatives to attract new investments.

“And investment goes hand in hand with trust,” he said, adding that his government is committed to maintaining a clear and predictable legal framework for companies to work with. On that, he declared, “Argentina is determined to stay on this responsible path.”

Among the new rules Marci is trying to push through include a reduction of import taxes on used oilfield equipment to 7%. “This is something novel,” he said, and will “make the most of the equipment available around the world to speed up the production process and generate higher competiveness and efficiencies.”

Concessions for the distribution and transport of natural gas have also been renegotiated to give companies more cash flow and help them finance new production programs. And though the country has moved its focus to promoting gas production, Macri explained that it has also incentivized oil extraction by eliminating export taxes and allowing producers to sell oil to refineries at market-based export prices.

New reforms are also being discussed that would integrate Argentina’s energy grid with its neighboring countries, potentially opening the door for the country to export gas-generated electricity.

Traveling with the president was his Energy Minister, Juan Aranguren, who said that the incentives the government is creating will improve productivity and encourage more drilling in the Vaca Muerta. “Our expectation is that in 4 to 5 years’ time, we will be able to remove all the LNG imports from Argentina as a consequence of the development of Vaca Muerta,” he said.

Aranguren is also confident that Argentine operators can leverage the North American shale experience and climb the learning curve at a faster pace. He noted that competition in the US has helped drive the pace of development, which is partly a factor of private mineral ownership—an element that does not exist in Argentina where the mineral resources are owned by each province.

“This is something we cannot change,” regarding mineral rights, he said. However, if the government’s proposed arrangements with both YPF and local officials in Neuquén province—the home of the Vaca Muerta—go through, then he said more partners will be able to join in and that “will give us the opportunity to have more competition, more learning, reduced costs, and more investment.”

Running from May 17-21, the SPE Latin American and Caribbean Petroleum Engineering Conference (LACPEC) is returning to Argentina, home of some of largest unconventional gas and oil resources in the world. LACPEC is designed to accelerate the application of innovations in every technical discipline and the multi-disciplinary program serves as a crucial platform for technology dissemination, knowledge sharing and collaboration. This year, LACPEC features the participation of 2017 SPE President, Janeen Judah, Chevron; and SPE South America and Caribbean Region Director, Anelise Lara, Petrobras. For more information and to register to attend or to learn about sponsorship opportunities, visit our LACPEC website.