Zinke Pushes for Review of Interior and Regulations at OTC 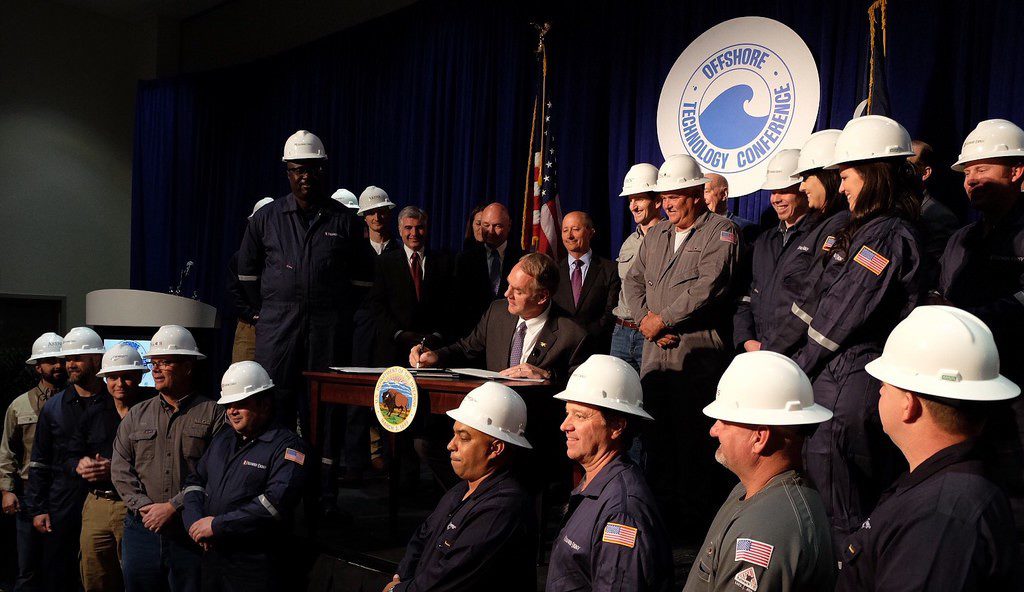 US Secretary of the Interior Ryan Zinke signs secretarial orders on stage on 1 May at the 2017 Offshore Technology Conference in Houston.

Secretary of the Interior Ryan Zinke praised America’s resource potential and regulatory framework at the 2017 Offshore Technology Conference on 1 May. He also laid out his plan to review the department and signed two secretarial orders.

Zinke pointed to the quality of regulation in the US. “The United States has the most stringent, toughest, best regulatory framework for safety and environment for extraction of our resources in the world. Undisputed.”

At the end of his speech, Zinke was joined on stage by a group of hardhat-clad workers to sign two secretarial orders. The first order directs the Bureau of Ocean Energy Management (BOEM) to develop a 5-year plan. In addition to ordering BOEM to quickly consider leases in the Outer Continental Shelf, it directs the bureau to work with the Department of Commerce’s National Marine Fisheries Service to consider requests for seismic surveys quickly.

The order also directs BOEM and the Bureau of Safety and Environmental Enforcement (BSEE) to review a host of other rules. “We’re going to look at everything. We have to look at infrastructure. How is it we extract wealth from our public lands in a meaningful, responsible way?”

Zinke added that the resources in North America put the US in a special position. “How do we incentivize American energy dominance?” he said, adding, “I choose my words carefully: dominance.”

“There’s a difference between energy independence and energy dominance,” he said. “We’re in a position to be dominant. If we, as a country, want to have national security, an economy which we all desperately need, then dominance is what America needs.”

The second order Zinke signed on stage created the position of counselor to the secretary for energy policy, which is designed to coordinate the Interior Department’s energy portfolio. “I just need a single point of contact so you can talk with energy in the Department of the Interior, so we are on the same page.”

Zinke pointed out that the different agencies are not always working well together. “And the American public isn’t served well. We have to look at ourselves, too, and make sure we’re streamlined and our regulations aren’t arbitrary.”

Zinke Pushes for Review of Interior and Regulations at OTC