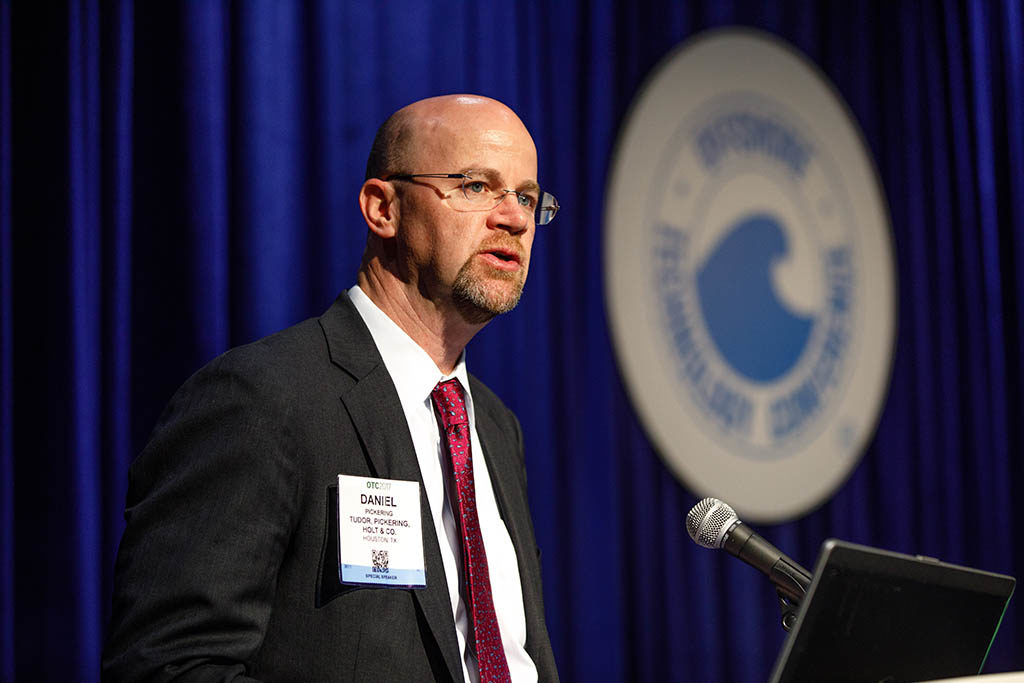 Dan Pickering, chief investment officer for Tudor, Pickering & Holt, during a lunchtime speech at the 2017 Offshore Technology Conference on the topic of "Financing Deepwater Development."

On the face of it, the offshore oil business and private equity investors have needs that should bring them together:

“This is a business that needs money and there are people who have money; the world is awash in capital,” said Dan Pickering, chief investment officer for Tudor, Pickering & Holt, during a lunchtime speech at the 2017 Offshore Technology Conference. “There is room for an intersection if like-minded people can get together.”

The degree of intersection has been limited to date due to the differences between those doing  deepwater exploration and production (E&P) and those running investment funds that put up large sums of money to start businesses, do buyouts, or play a major role in project financing.

Private equity firms are looking for sure things, while Tudor Pickering estimates that only 15% of the offshore wells drilled produce enough to be commercial. Investors are looking for a return level that is higher than E&P operators generally set, want to be able to ensure that the companies they invest in follow a strategy compatible with their profit maximization target, and would like to see that return with a set time frame.

With oil prices in the USD 50/bbl range, there are tempting offshore projects, but even the best prospects will not generate the cash flow needed to pay for the project using more traditional financial options if that venture is not a major company.

Private equity companies have the money to invest. As of last fall, investment firms followed by Tudor Pickering were capable of raising USD 150 billion for energy investments.

“At the end of the day, someone will come up with a unique structure and figure out innovative ways to do this,” Pickering said.

There are examples of private equity money put to work in offshore exploration, such as Talos Energy, an independent with holdings in both the US and Mexican sides of the Gulf of Mexico. It was founded with backing from two big private equity firms, Apollo Global Management and Riverstone Holdings.

During a later panel discussion on offshore development, Tim Duncan, the founder and chief executive officer of Talos, said that it is important to go into such a deal with an understanding of the realities of private equity financing. Those include being aware that the money invested plus a significant return is expected with a few years, which often requires selling the company or going public.

While deepwater has long been associated with the major oil companies, which have the scale and resources to finance long-term multi-billion deals, at the moment their focus is on unconventional oil and gas areas such as Permian.

Duncan said an independent doing offshore work “can feel like a second-class citizen to shale plays”—leaving plenty of offshore projects in need of backing.

Private equity may be the best alternative for operators who find projects that can be profitably developed but do not generate the cash flow needed to qualify for more traditional financing options.

In the unlikely event oil surges back to USD 80/bbl, oil and gas companies would be less likely to seek private equity money, which comes at a higher cost and more strings attached, than traditional alternatives. But at these prices, private equity companies are looking for deals in exploration and production.

“It is a statistical business where you need a certain number of shots on goal” to score, Pickering said. While there are more than 20 private equity funds with more than USD 1 billion, few could afford drilling 10 USD-50-million wells that are dry holes “and be in business to drill the eleventh.”

Getting money to support a service provider in deep water is a tougher sell. While he said there is financing for companies with offerings that add value and generate revenues from offshore operators, startup companies selling new technology can expect a chilly response.

“The word technology scares the heck out of private equity,” he said, explaining that many associate that pitch with an ideal that lacks money and revenues, and quite possibly will not work.